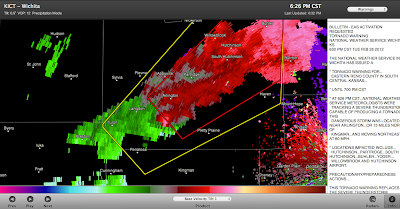 TERMS TO KNOW:
Hodograph: A device measuring distance from its starting point as the device ascends through the atmosphere on a weather balloon. Circular shapes can indicate rotation in the atmosphere.
EHI: A combination of spinning and helicity to make for, in my eyes, the best attempt to forecast where apt tornado conditions may be.
CAPE: Instability. Values above 1000 j/kg can be conductive for thunderstorms.

Latest 18z NAM is indicating high values of EHI (spinning+instability equation that can help determine a tornadic atmosphere) present on the Oklahoma Arkansas border. At that same time, storms should be just beginning to enter that area, with the 18z NAM projecting these storms to be fairly weak. However, this weakness is likely understated- At the point in time in question, the squall line will be not be a line yet, but it will be a weakly put together line of separate storm cells. Judging by forecast high EHI values and CAPE above 1000 j/kg, this should be an interesting night. 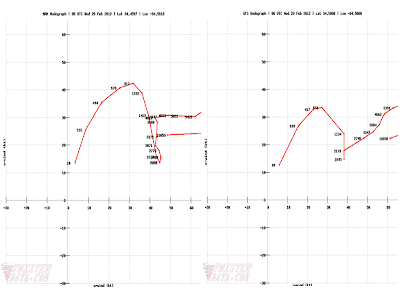 Here's a comparison for forecast hodographs of the 18z NAM (left) and the 12z GFS (right). While the models are on different runs, I have affixed them to be at the same forecast time.
The 18z NAM is honestly pretty concerning, with two roughly circular shapes present in the forecast. To start off with the whole hodograph is concerning, as the hodograph shows a half circle shape before suddenly turning into two tight bands of circles.  The sudden changeover to the circles makes me think that there may be too strong winds in the atmosphere to create a robust tornado, but that is dashed after the hodograph reveals the circular formations, both of which are likely indicative of a rotational motion in the atmosphere.
The 12z GFS is much more modest, having the hodograph take a similar half-circle-sudden-change path, but where the NAM shows the circles, the GFS shows it's attempt to make a circle, but believes that winds will be too tight for rotation to be shown. After that, the GFS hodograph shows it going off the screen but likely making a near full circle shape. Again, that is one of the more concerning features of this hodograph.
By Andrew at 3:52 PM 4 comments:

12z NAM Is printing a scary scenario this evening with dangerously high Helicity (1st image) and EHI (2nd image). Again, EHI is the spinning in the atmosphere plus energy in the atmosphere. Values over 1 are dangerous.

Since this is done from my phone, the Helicity image is the one with pink in the image. 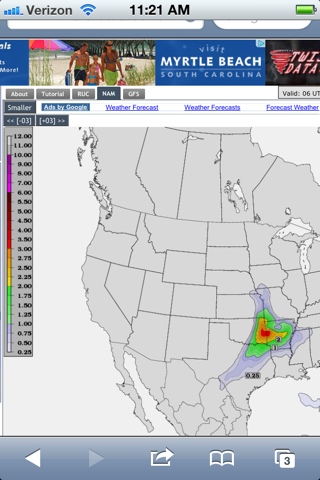 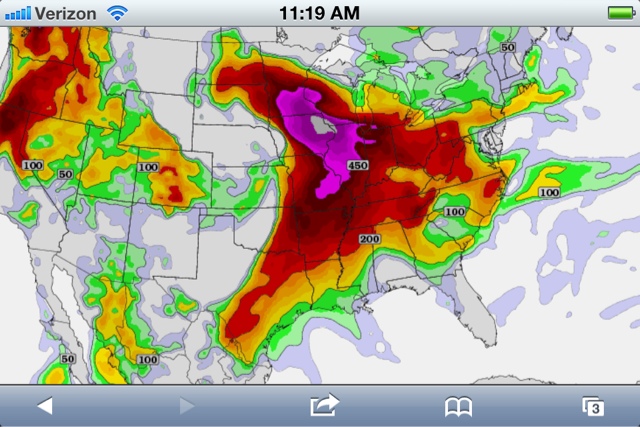 As expected, the Storm Prediction Center did not issue a moderate risk for today, which in my eyes was a good move.
That does not, however, mean that the risk today will be zero. In reality, it is actually pretty substantial.
The first image is the overall outlook for severe storms in general. The second image indicates the chance for a tornado. I have come to learn that when there is a 10% chance of a tornado, a tornado can be reported in that 10% area. This time, however, that 10% area is so small that the chance of a tornado inside that 10% area seems lower than what it seems.

Prognosis-
A severe weather event is possible today in Arkansas, Missouri and west Tennessee, among other states. Forecast models indicate shearing levels between the surface and 700mb to be pretty sufficient on the GFS, with speeds of above 50 knots. However, this big shearing is in Missouri, with slightly lower speeds in Arkansas, thereby slightly reducing the tornado threat. Good shearing is also present in the surface-500mb area, but again, the big wind speeds are to the north and west of the main tornado risk put out by the SPC.

Precipitation should start this afternoon and congeal into something better than disorganized cells later in the afternoon/evening. An atmospheric cap will be over the area where storms break out, but it will be a very weak one, so these storms should easily break it.

An atmospheric cap is what's called CINH in the meteorology world. CINH is detected when a layer of warm air is present over the cooler atmospheric air up in the skies (warm air in the storms rises through the cool air over the atmosphere to make storm clouds and then storms.). If this CINH is too strong, the storms will be forced to stop at the 'cap' of warm air, as the air is too warm so the storms cannot continue rising through the atmosphere. This thereby 'caps' the storm and keeps it from getting stronger.

The tornado threat in Arkansas will be an overnight one, with maximum EHI (instability and spinning motion combined) values coming into the state at 3:00 AM CST. This is a very dangerous situation, as many will be asleep and not be able to hear a tornado coming. Additionally, tornadoes are much harder to be seen at night.

I will provide another update this afternoon. Stay safe everyone.
-Andrew
By Andrew at 6:45 AM 2 comments: