Model guidance indicates we will see a trough drop through Japan on the morning of April 6th, in the wake of a stronger system just before it. You can read about that storm on this post. There is a rule, well explained by Joe Renken, that states a weather phenomenon in East Asia will be reciprocated in the United States 6-10 days later. This means that if there is a storm system in Japan on a certain day, we can expect a storm in the US 6-10 days after that. The same goes for high pressure and warm weather. In this case, we see can expect a storm system in the United States, likely accompanied by a brief cold spell, in the April 12-16 time period, 6-10 days after the expected April 6th intrusion in Japan. The post title indicates this may be a potentially major storm due to the deep negative height anomalies in the above forecast, but that may be more for the cooler weather.

Shown above is a chart of four panels, each showing the projected anomaly of a different oscillation in the atmosphere. Let's begin with the top-left panel, the PNA. The Pacific North American (PNA) index deals with 500mb height anomalies in the West US and into the Northeast Pacific. When we see high pressure dominating this area, we deem it to be a positive PNA. When we see storminess over the aforementioned regions, a negative PNA is in place. The positive PNA tends to lead to cold and stormy weather in the Central and East US, while the negative PNA provokes high pressure and warm weather across the same areas. We see the PNA is to be positive during this expected storm system, which does support the idea that this storm will bring along cooler conditions with it. A potential storm track in the positive PNA is one that goes through the South Plains, which could create severe weather, before shooting north into the Midwest or Ohio Valley.
We see the WPO (West Pacific Oscillation) and EPO (East Pacific Oscillation) are both projected to be negative during the April 12-16 time period, adding to the chances that we see cooler weather during this timeframe.

To summarize:
• There is the potential for a storm system in the US in the April 12-16 timeframe.
• Cooler than normal conditions may arrive during this time period.
• Severe weather is a possibility. Exact locations are unknown.

Today's post will look at the expected weather pattern for the month of April, 2014.

We currently see tropical forcing located over the Indian Ocean, specifically southeast of the subcontinent of India. This forcing is associated with a convectively-coupled Kelvin Wave (CCKW), which will begin progressing east in future days. Currently, the placement of the CCKW supports cooler than normal weather, which we have been seeing recently, and should continue to see in the next few days, probably into about April 9th or 10th.

Specialized maps from the Australian Bureau of Meteorology indicate we will see this CCKW push east in coming days, taking the tropical forcing with it into a pattern that should bring more seasonal, possibly even above normal temperatures to the United States.

Typically, when we see enhanced tropical convection entering the western Oceania region, we tend to see the weather pattern favoring warmer than normal weather in the United States. On the Madden-Julian Oscillation scale, this would mean movement into Phases 5 and 6. 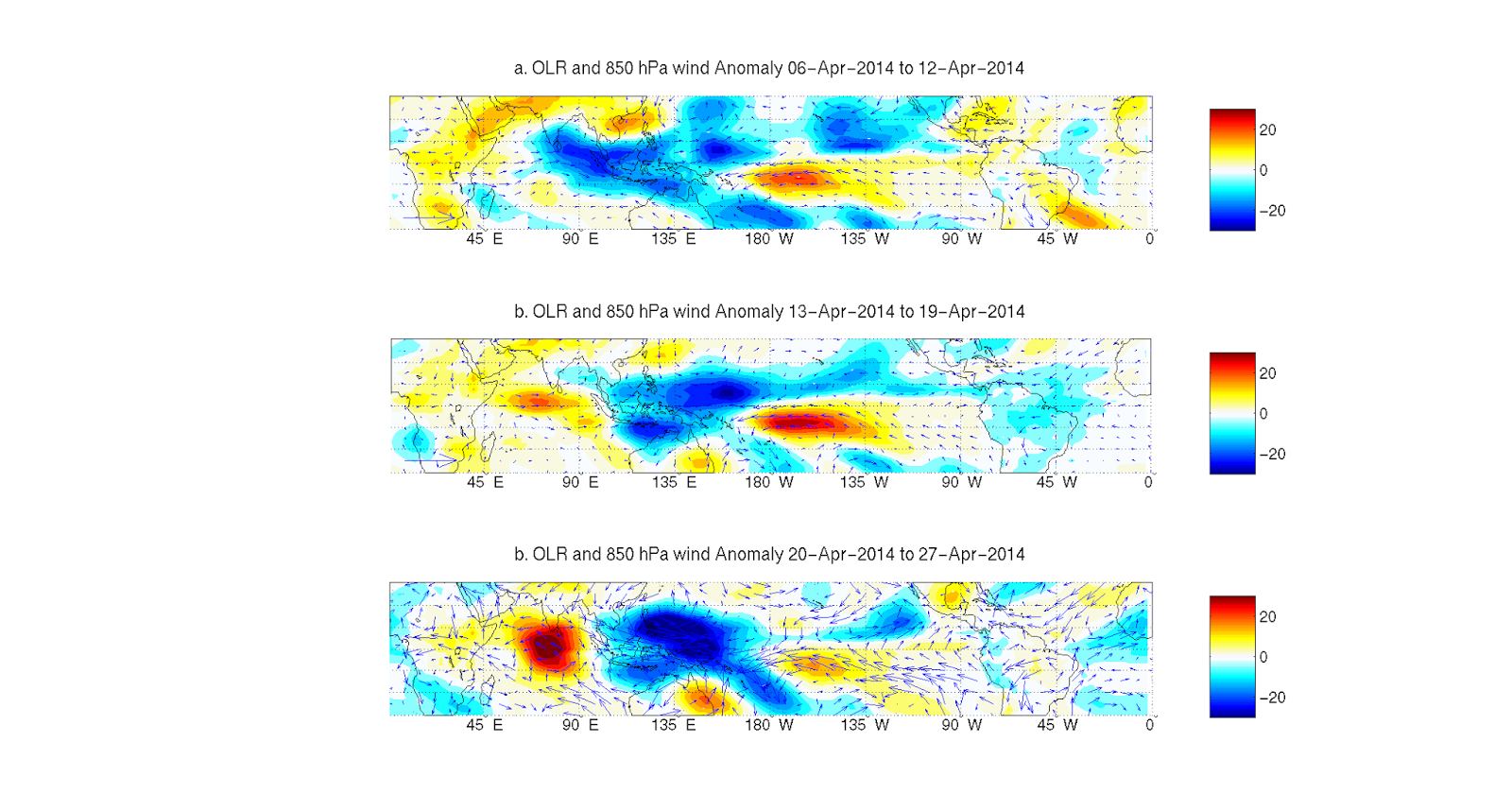 Moving along, we can look ahead into late April by examining outgoing longwave radiation (OLR) plots from Paul Roundy at Albany. Looking specifically at the bottom plot, valid for April 20th to 27th, we see strong negative OLR anomalies (enhanced tropical convection) present in western Oceania, the same place where the CCKW is expected to travel in just a couple days. If this chart is to be believed, we may expect seasonal to warmer than normal temperatures for the end of April, as these negative OLR anomalies are in the typical Phase 5 and 6 MJO phases, which, as we looked at above, bring about warmer than normal weather in the US.

To sum up, here is a graphical representation of expected temperature anomalies across the month of April. 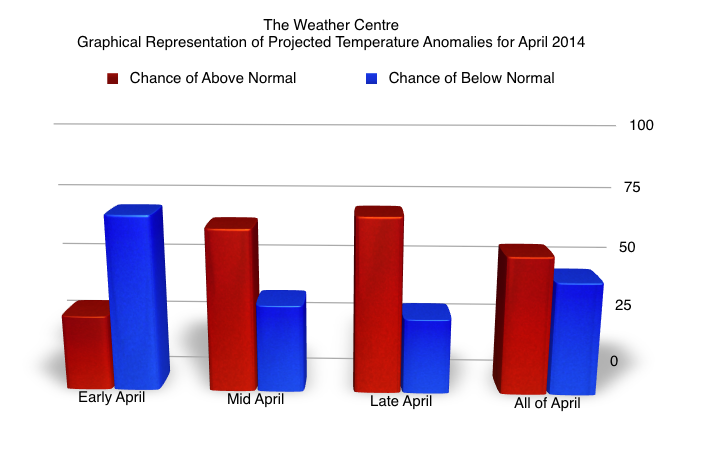