Windy Enough For You?

Winds are sustained as high as 30 MPH across cities in the Midwest such as Chicago and Milwaukee today, as a strong warm front pulls warm air north into the region.

Wind gust forecasts from the GFS model at 10 PM (CT) this evening show gusts as high as 50 MPH over Lake Michigan, with over 40 MPH wind gusts possible on land, especially in the Western Great Lakes. The increase in wind will come as a cold front sweeps across the region and brings yet another cool down to the area.

Damage to trees, with branches being ripped off, has been reported. Are you in these chaotic winds?

As the atmosphere continues its refusal to recognize the presence of an El Nino, and sudden cooling of waters below the El Nino erupts, it has come time to think about what would happen in a neutral ENSO winter, because as of now, hope for El Nino fades with every day the atmosphere does not recognize its presence. 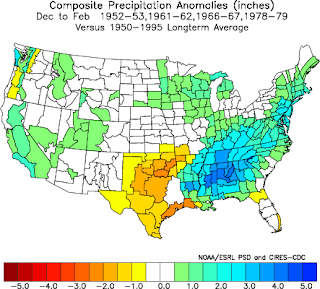 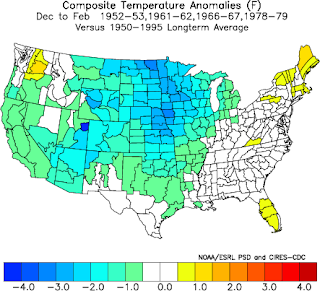 These are years hand-picked by me to ensure as much accuracy as possible in these analogs. These 4 years contained both a neutral ENSO winter, as well as a negative PDO comparable to what that we are in now.

The analogs I have chosen have indicated that a cool winter would most likely arise from a neutral-ENSO/negative PDO situation, with anomalies of -1 to -3 being found across the Plains and Midwest regions. The East Coast contains neutral temperature anomalies, with maybe a bit of warmer than normal temperatures being found in upper New England. As for precipitation, a very wet scenario encompassed the Southeast, Gulf Coast, and East Coast, where over 3 inches above normal precipitation could be found. Some wetter conditions also prevailed in the Midwest, Ohio Valley, and parts of the Northern Plains.

One can find the La Nina side of this analogue choice in the temperatures, with a general cool down over the Northern half of the nation. A somewhat El Nino-y scenario is spotted in the South and East, with very wet conditions in those areas. Should we continue to see a strengthening of cooler than normal water anomalies below the El Nino, these 4 years may hold the key to winter. Of course, this will depend on how the 'fake' El Nino evolves over the next several weeks.