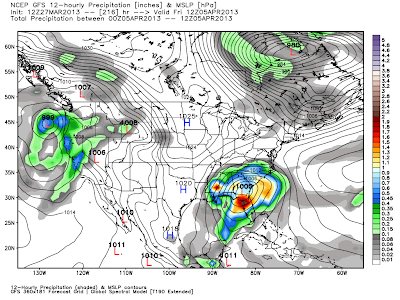 The American GFS model is showing a strong storm in the Southeast US on April 5th, in an event that could pose the next threat for a Nor'easter. 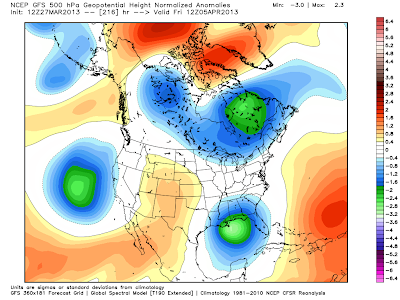 Now, the American model proceeds to take this storm out to sea after moving through the Southeast. However, I think there is potential for a Nor'easter to take place rather than the system just moving offshore. Shown above is a forecast chart for 500 millibar anomalies, where warm colors indicate high pressure and cool colors show low pressure. Our storm system is very visible along the Gulf Coast, and it looks like it should go up the coast. However, for some unknown reason, the American model refuses to do so. Considering high pressure over Greenland is strongest to the immediate west of the nation, this storm should have very strong backing to go up the East Coast, possibly producing a strong rain or snow event for many. But neither the American or European models allow this. Based on personal experience, we are almost guaranteed to see this storm's track change, possibly to a position more favorable for sliding up the Eastern Seaboard. There remains a lot to be discovered, but I do believe the potential is there for a Nor'easter.

Hello everyone, and welcome to The Weather Centre's Preliminary Atlantic Hurricane Outlook. In this outlook, because it is just the preliminary outlook, we will only examine my current analog package and a batch of ENSO model forecasts.

After choosing specific years from these two indices, I combined my chosen years and used the ones that had both the PDO and AMO in phases similar to what we are currently anticipating. As a result, I came up with the years 1951, 1952, 1955, 1956, 1999, 2000, 2008, and 2011. All of these years had a clear negative Pacific-Decadal Oscillation and positive Atlantic Multidecadal Oscillation, which is what we are experiencing now and what we should experience moving forward into the spring and summer months.

Let's take a look at an archive of hurricane tracks during the aforementioned years to see if we can see a trend in my analog years that could assist in helping us find a common track for the upcoming season. 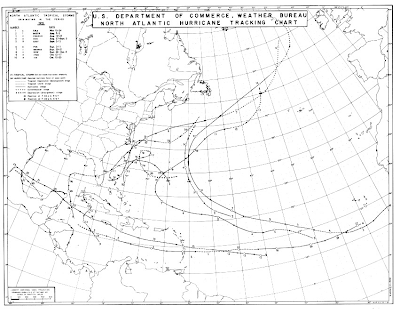 In 1951, we saw a storm season that had many storms going out to sea rather than towards the US Mainland. At least 3 of those storms didn't even have a chance of making it to the United States. However, there were a few storms that did have a close brush with the Carolinas, as well as one landfall in Florida. A couple storms did make a threatening track towards the Gulf, but for one reason or another they did not hit the US. One storm (Hurricane Charlie) did hit Mexico, the Yucatan Peninsula, and Jamacia. All in all, the trend for this year was a slight Gulf threat with multiple close calls on the East Coast. 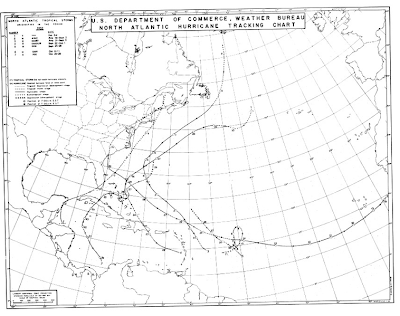 1952 was not unlike 1951 in terms of where tropical systems went. While the Gulf of Mexico was considerably quieter with no systems actually in the heart of the Gulf, there was one landfallig system in the Southeast US, another landfall in Florida, and at least 3 storms that ended up recurving out to sea. The system that struck Florida, which formed on Groundhog Day (yes, in February), was never named. Hurricane Able was the system that hit the Southeast. The trend in this season was a threat to the East Coast and a rather quiet Gulf of Mexico. 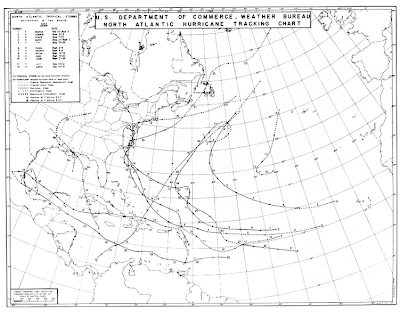 1955's Atlantic Hurricane season involved a pretty darn active season in terms of landfalling tropical systems. We saw multiple impacts on the Gulf Coast, especially in Louisiana and Mississippi. We also saw possibly more than 2 separate landfalls on the East Coast, all of which struck the Mid-Atlantic (one also sideswiped the Northeast). Tropical Storm Brenda was one of the systems that hit the Gulf Coast, and it was Hurricane Connie that slammed into the East Coast. Tropical Storm Five followed Brenda into the Gulf, while Hurricane Diane took a hint from Connie and sped towards the East Coast to make landfall. The clear trend here is an active landfalling season in the Gulf and East Coast. 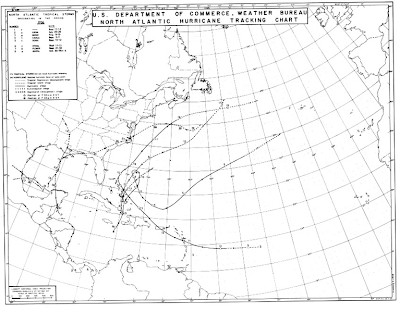 1956 continued the idea of storms running dangerously close to the US Mainland, even making landfall a couple points along the way. We saw a rather unusual season in that the majority of the storms took almost a due-north path out to sea. Usually, storms will form off the coast of Africa and curve west before doing a 180 and going out to sea. In this season, the storms just formed and made their intentions clear as day. Tropical Storm One, the first named system of the season, impacted the Gulf with a landfall. Both Hurricane Anna and Tropical Storm Dora hit Mexico, while Hurricane Flossy did a double-take by hitting the Yucatan Peninsula and the Gulf Coast. An unnamed subtropical cyclone hit Florida and skirted into the Mid-Atlantic. The trend in this season is clear: Tropical cyclone threats were highest in the East Coast and Gulf Coast. 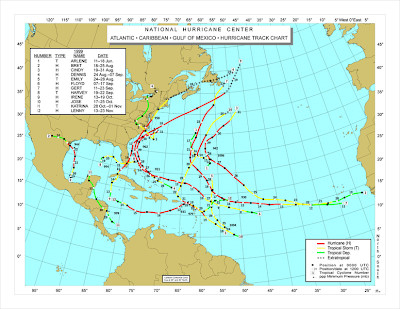 1999 was no different than previous years. We saw multiple tropical cyclones skirt immediately offshore of the Eastern Seaboard, and the Gulf of Mexico came under fire. We saw extreme southern Texas take a landfall from Hurricane Bret, while Florida was surrounded by several near-misses and at least two landfalling systems. It was Hurricane Dennis that took one of the most awkward tracks I have ever seen a tropical cyclone take. It began to curve out to sea after narrowly missing eastern Florida, but suddenly make a hard turn south, then a hard turn west before making landfall in the Mid-Atlantic as a weak tropical cyclone. The trend continues; East Coast and Gulf Coast were threatened in this season. 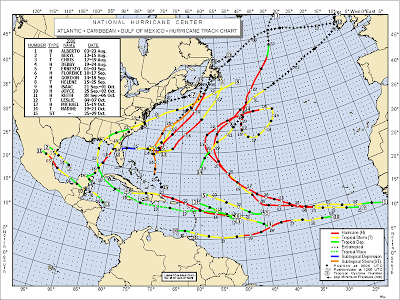 The year 2000 was a bit different in that the number of threats to the East Coast was reduced. We saw more of a tendency for storms to curve out to sea earlier than storms in, say, 1999. The state of Florida did bear the brunt of at least one landfall (courtesy of Hurricane Gordon), while Alabama and Georgia were affected by a tropical cyclone known as Tropical Storm Helene. A tropical depression also made landfall in the western Gulf Coast, although it is not shown in the map above. The Gulf Coast definitely made headlines as the most affected area this season, with the East Coast in a not-so-close second. 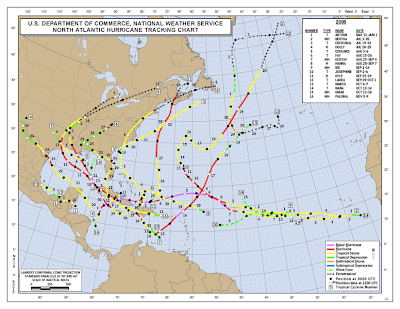 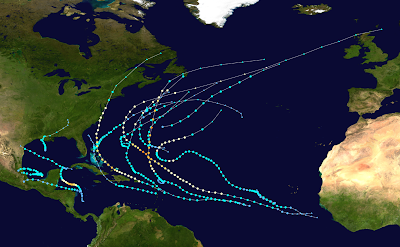 My last analog year, 2011, echoed previous analog years, but also raised the recurring theme of storms curving out to sea. We saw the heavy majority of tropical cyclones curving out to sea in 2011, with little to no damage coming between them. However, there were two Gulf Coast landfalls that were weak, as well as one Mid-Atlantic landfall. The final analog year continued the idea that the US mainland was threatened. 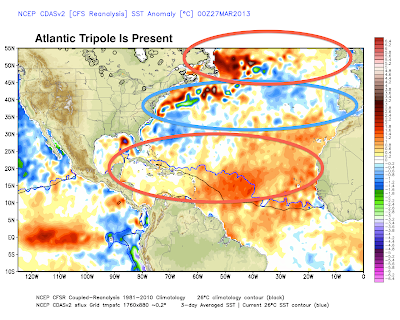 The next piece of evidence I want to show you is a chart of the latest observed sea surface temperature anomalies over the Atlantic Ocean. I outlined three regions of anomalies- an above-normal sea surface temperature (SST) area in and just south of Greenland, a below normal SST area to the east-northeast of the Mid-Atlantic coastline, and a large swath of above normal SST values from the coast of Africa and west into the Caribbean. This type of arrangement of SST anomalies is called an Atlantic Tripole. Years that had an Atlantic Tripole in place had a positive correlation with the monthly hurricane total from June to July and Accumulated Cyclone Energy (ACE) values. This positive correlation means that, since the Atlantic Tripole is in its positive phase right now, we could reasonably expect more tropical cyclones than normal to form this season, and those cyclones could have more energy than normal, which would then raise the ACE index.

I am monitoring the El Nino-Southern Oscillation at this time, and current sea surface temperatures suggest we are in an El Nino. I don't really want to touch on that subject, as model forecasts have the Nino fighting an uphill battle as far as being able to survive during the hurricane season. Until the model forecasts clear up, I don't have enough confidence to lean one way or another on the presence or lack of an El Nino.

Based on my current analog package, combined with the Atlantic Tripole and a few other factors that greatly contribute to the Atlantic hurricane season, I believe that the threat to the Gulf Coast is 'High'. The 'High' threat means that the risk of a tropical cyclone of ANY strength hitting the Gulf Coast is pretty significant. I cannot go in-depth into strength of the cyclone until my official outlook (which will be out in Late April or Early May), but I cannot rule out the potential of a hurricane hitting the Gulf. As for the threat to the East Coast, I have classified the threat as 'Medium-High', meaning that there is a pretty decent chance of a tropical cyclone of any strength affecting the East Coast. Based on the analog package, the threat of a tropical system hitting that region is pretty solid.

If you have any general questions (no specific timing, strength or location questions, please), don't hesitate to ask. I will try my best to get back to you ASAP.