"I can't think of a better scenario for severe weather this season."
This spring's severe weather season has potential to be more violent than last year's severe weather season, which was horrible to begin with. These sorts of extreme severe weather seasons don't happen often as they seem. What we have here is a coincidentally ticking time bomb that may very well go off this spring.
The image above shows the most recent sea surface temperature anomalies for the Caribbean. We can see the cooler than normal Caribbean. But the area I am paying close attention to is the Gulf of Mexico. You see how it is above normal? That is the bad part.
The Gulf of Mexico is the 'lighter fluid' to any severe weather outbreak- it supplies the warm, humid air that is smashed against cold, dry air on the backside of a storm system. Typically, the Gulf of Mexico is cooled down during the winter by the cold air that manages to seep south from the Northern US. This winter, however, there wasn't enough cold air to seep into the Northern US! Of course we are seeing more cold air now, but the damage has been done.
As February comes around, I feel that too much cold air has been diverted from the Gulf of Mexico (GOM) to make a difference in how this spring will turn out. With February comes the end of winter- increasing daylight time, increasing sun power, all of which will play into canceling out any cold outbreaks that may reach the GOM.
Another thing we have seen is spring-level storm systems. This last one (February 2-6) snow and rain storm consisted of 2 feet of snow on the north end of the system to a tornado watch on the southern end. The way this storm was positioned is a huge red flag in my eyes that the atmosphere is already in the beginning stages of spring. We saw tornadoes early this year. That isn't exactly a common feat. Those early-year tornadoes only strengthen my fear that this severe weather season will be a rough, tough and violent ride.
The above 2 images tell the story better than I can- There is an astoundingly higher number of severe weather reports in January this year than there were last year. This could be a horrible precursor to the March-July severe weather season...and I have a feeling it is.
The springtime is usually a turbulent time without severe weather as the atmosphere has to change itself from winter to summer over the course of a few months- severe weather is just the atmosphere saying that it is working on the change. But this could complicate that change.
We are currently in a La Nina, which signifies below normal sea surface temperature anomalies right around the equator. These models above show us heading into neutral and possibly El Nino territory going into the second half of this year. The question here is 'How will the atmosphere handle a changing winter-summer pattern in addition to a changing ENSO pattern?' My opinion is that it will not end well.
Think of it like a building with a small base and a wide top (bad building design, i know, but this is just an example). The winter-summer change is the wide base. But a warm GOM and changing ENSO could be interpreted as like adding two more wide floors to the top of the building. The question then becomes 'Will this building give way?' In this case, the question is, 'Will these factors combine to make for an epic severe weather season?'
I know I sound like Mister Doom and Gloom over here, but to be honest, there's a lot of pieces in place that are favorable for severe weather this spring.
Here's my forecast for the severe weather season. 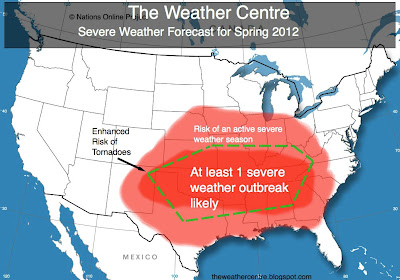 The tornado risk is only a rough estimate as we cannot predict where exactly it will be. Tornadoes are their own beings and are impossible to predict even a week in advance.
I believe that much of the East US will get in on at least a risk of severe weather come spring. I think that the southern Midwest, southern Plains and Southeast may get in on at least 1 severe weather outbreak this spring ('outbreak' is defined as a long-term severe weather event with a 'high' number of severe weather reports).
If you have any questions, please ask in the comments section.
**Side note: I am considering the opportunity to have you, the reader, be able to comment your location and get a forecast for the severe weather season for your hometown. You can vote 'Yes' or 'No' on if you would like that option on the righthand sidebar.**
-Andrew
By Andrew at 2:00 PM 6 comments: Links to this post

Severe Weather Spring Forecast Will Be Released at 2:00 PM CST

The 0z GFS is predicting the Arctic Oscillation and North Atlantic Oscillation to move into a very strong negative phase going into mid February. What is being projected is the polar vortex to move south and hit the US as a very cold blast and possibly a snowstorm. I am afraid I cannot answer questions on where it will hit as i honestly don't know at this point.
The downside of this forecast is how the 0z GFS is the only one predicting this- the GFS Ensembles, ECMWF, ECMWF Ensembles are much more modest with the forecast. However- the ECMWF also predicts the polar vortex to be extremely displaced south into Canada and possibly the US.
By Andrew at 10:32 AM 8 comments: Links to this post