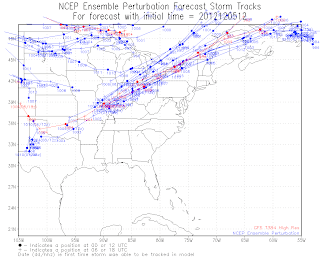 Models and ensembles remain somewhat unsure on this system, although the modest consensus beginning to form indicates that this winter storm will not be a big event as was earlier anticipated, and snowfall will not be as significant as earlier forecasts had indicated.

The above image shows the GFS model 12z forecast in red, with the NCEP Ensembles in blue superimposed on the image. The GFS model is right in the middle of these ensembles, and they all seem like they know what's going on. However, upon an analysis of other ensembles and model solutions, it becomes clear that the solutions being offered up by different forecasts vary as far as who could get how much precipitation, as well as the billion dollar question: Who will get snow? 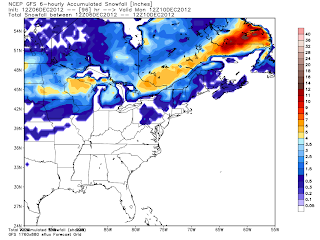 The GFS model's snowfall forecast describes a nice storm for Wisconsin and Minnesota. The amounts in Illinois and Iowa were from an earlier system. This snowfall forecast is quite a change from what we had been seeing yesterday, where the models brought big snows to Iowa, Wisconsin and Nebraska. Now, the first and third states look like they're in trouble.

The presence of an east-based negative NAO and a positive PNA trying to sneak in adds to a New England ridge to try and promote a Midwestern storm track for this system. I believe that the GFS has a good handle on the track, but I don't want to trust any precipitation type forecasts until we get this system on US soil, where weather balloon data can greatly help the models in their forecasts.

Andrew
By Andrew at 4:05 PM 6 comments: Links to this post 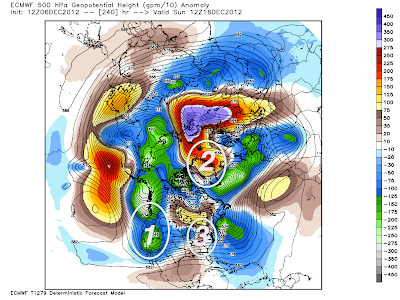 A much stormier pattern looks to be emerging in the next week or two, but persistent cold weather will be lacking.

The above image is today's new 12z ECMWF model forecast at hour 240, or 10 days away. The colors are shown on the legend on the right as 500mb height anomalies. Cooler colors show below normal heights (stormy trend), and warmer colors depict a quieter pattern with above normal heights. Let's dissect the areas of interest I marked off.

This is usually something that would drive many in the East US up the wall as far as cold and snow potentials being ruined. However, this negative PNA looks like it will come in a more bursting form. What multiple models are showing is that several storms will break off of the original Gulf of Alaska trough and move south, into the West Coast. Typically, they would stick around and hold the negative PNA pattern. However, this regime should incite pieces of energy (strong pieces at that) to move east and actually bring big chances for snow and storms to the central and east US. The question is, where will these storms tend to go?

We've all heard of the negative North Atlantic Oscillation (NAO) and how it brings cold and snow to the Northeast when it is in this phase. However, exactly where the ridge in Greenland is based is key. The ridge in Greenland is the base of the negative NAO. However, if it is west of Greenland, we call it 'west based'. West Based negative NAO's tend to favor the East Coast for all the cold and snow. If that ridge of high pressure is east of Greenland, we refer to the NAO as 'east based'. In the east-based negative NAO, the Plains and Midwest benefit the most from the storms and cold. If we take a gander at the above ECMWF forecast, it's apparent that we have an east-based (possibly back and forth with west-based) negative NAO. If we then follow up with our negative PNA and its storm train, I would think that the Plains and possibly the Midwest would get in on some stormy action. Precipitation type is a little harder to determine.

The reason this isn't a perfect storm with the negative PNA / negative NAO is because of how the negative PNA really works. Due to a depression in heights in the West, physics dictates that we would see an above normal height anomaly (high pressure tendency) to develop in the East. Now, because the storm train that the negative PNA looks to create, these ridges will not be in place for days and days- they should be off and on, depending on when the storms come through. However, this off-and-on solution shows that any snow that sticks in any place will not be welcome to stay for a long period of time. 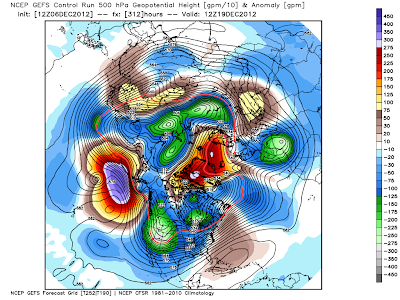 Looking at the longer range GEFS Control run (a member of the ensembles, but its parameters are unchanged, unlike other ensemble members), we see the negative NAO still struggling to determine whether it's east or west based, and our negative PNA continuing to blast energy into the West.

Something I think should be monitored, however, is the combination of a -PNA, -NAO and -AO. The -AO and -NAO would theoretically open the floodgates for cold, but that negative PNA puts a stop to it reaching the East. That said, I anticipate the cold to stay in Canada and the Northern Plains. The Dakotas, Minnesota, Montana and the like could get in on some of the cold action, but that's about it for the short term.

Despite this GEFS Control forecast, it is essentially one run of the GFS- not worth much on its own. That said, take this forecast for what it's worth. I personally believe the ECMWF has a good forecast going (it has verified well in recent months), and we should see some clarity in the models in coming days.

Andrew
By Andrew at 3:38 PM 4 comments: Links to this post