We continue to see the record breaking Kelvin Wave pushing to the surface, and anomalously warm waters are now appearing from the subsurface.

Water temperatures from the coast of Ecuador across the Equator are decidedly warmer than normal as of March 26th, as the chart above from the Climate Prediction Center shows. We see an arm of warmer than normal sea surface temperature anomalies (SSTAs) extending from about the 100W longitude line westward to roughly 140W. This noticeable warming comes as the strongest Kelvin Wave in history begins to push to the surface, in what could result in one of the stronger El Nino events on record.

The image here shows temperature anomalies on a depth by longitude layout on the bottom panel of this graphic, and the Kelvin Wave is clearly marked. As of March 31st, the water temperatures maxed out as high as 6.35 degrees Celsius above normal, confirming that this Kelvin Wave does appear to be the strongest one on record. This body of warm water provoked by the Wave is beginning to push to the surface, and this is already observed well by the extension of warm water to the surface around the 160E longitude line. I expect sea surface temperatures to continue to gradually rise in response to the agitated Kelvin Wave as it begins its trek to the surface. 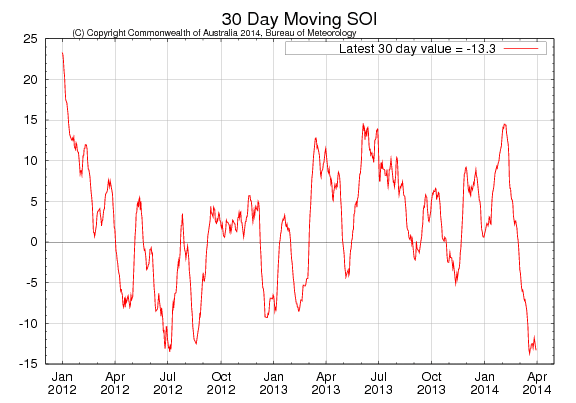 We have been seeing the telltale El Nino signal in the Southern Oscillation Index for some time now. The chart above shows observed values of the Southern Oscillation Index averaged across a 30 day time period, shown since roughly December 2011. We have seen a roller-coaster pattern, as the atmosphere has been undecided on whether it will declare a La Nina or El Nino, until recently. As the chart shows, the SOI has completely tanked in recent days, to levels approaching -15. Values below -8 are considered resembling of an El Nino, while SOI observations above +8 are considered indicative of a La Nina. With the SOI being as low as it has been, there's little question in my mind that along with this Kelvin Wave, and taking into account the predicted conditions in the Equatorial Pacific in coming weeks, that we are entering into an El Nino. 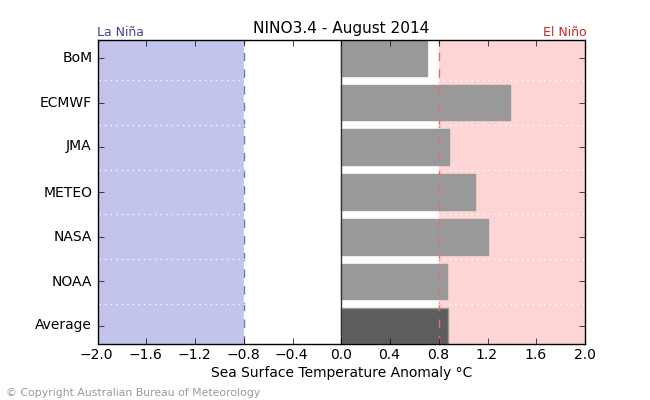 A spread of global model projections of the El Nino-Southern Oscillation (ENSO) phenomenon all agree on at least a weak El Nino forming by August 2014, but even this seems a bit weak to me. I fear that model guidance is underestimating the current Kelvin Wave, and the El Nino may be a fair bit stronger by August 2014 than what is being shown here.

Updates on this unfolding situation will be provided on a weekly or bi-weekly basis, depending on the new information available.