I am tracking the potential for a major snowstorm to strike the Midwest and portions of the Plains going into February 14-18. This discussion will involve the weather models as well as teleconnections.


Does the Hour 216 image look familiar to you? It should, because it is extremely similar to what we posted yesterday (click here) in yesterday's discussion. Either way, the ECMWF is now trending this storm and bringing it through the Plains and Midwest. It looks like the ECMWF is anticipating the storm to result from a phasing of two systems seen at hour 192. The way the system progresses from Arkansas to Ohio makes me think that a Southeast Ridge may be in place, emphasis on 'may'. While it does appear the ECMWF is showing a ridge over Cuba, I do not want to speculate as I am not seeing any big evidence of a ridge.
The ECMWF is indicating that the NAO may be moving from negative into positive, meaning that we will likely see neutral effects of the NAO. We will discuss teleconnections later.
To give you an idea of how accurate the ECMWF can be, this is a verification chart relating to this morning's 0z model runs. While the GFS, CMC, NOGAPS models have troubles with verification starting at hour 36, the ECMWF model stays rock solid through at least hour 120 (the closer the model is to the bottom of the line indicates its better accuracy). For that reason, I believe all ECMWF runs are very much worth watching for this storm. It is also reasons like this image show why I throw out the NOGAPS model and the GGEM (CMC) model if it's doing bad on these charts.

The 12z GFS takes the storm through the south and bombs it out on the Northeast. What I find here is a prominent +PNA pattern in some aspects, like the storm tracks. However, that is not exactly confirmed by the model's calculations and this general image above. The MJO appears to be similar for GFS/ECMWF. So what is the problem? Accuracy.
Using the image I put up above of the verification, it is obvious that the GFS is having problems. It was showing a major snowstorm for the Midwest a few runs ago, and seeing this sudden shift leads me to think that it is entering a time of turbulence typical of models in the long range. In summary, I am not buying the 12z GFS solution, even though it obliterates the coastal Northeast with over 12'' of snow.


The ESRL PSD 0z Ensembles are showing the system as well and mainly keep the entire northern US in the potential for snow, judging by the rain/snow line (red line on the left images). The right images are of the 500mb level. It looks like the PSD Ensembles are indeed showing a storm in this timeframe, indicated by the dipping yellow lines in the Great Lakes and Midwest. Going back to the point of a possible Southeast Ridge I mentioned after the 12z ECMWF images, the PSD Ensembles are not portraying any major ridging in the Southeast per the median line, marked in yellow. A closer look, however, shows individual PSD Ensemble Members indicating some Southeast Ridging going on, so that will have to be closely watched. 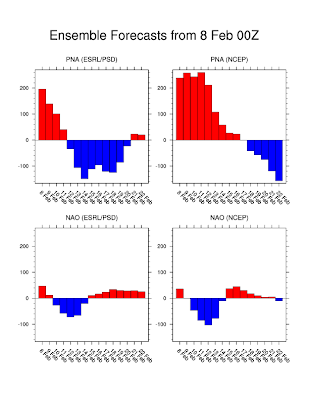 As for teleconnections, we have the PNA forecasts on the top and NAO forecasts on the bottom, with the ESRL/PSD and NCEP forecasting on the left and right sides, respectively.
The NCEP sees the PNA mainly keeping a neutral or slightly negative stance into the storm's timeframe. The ESRL has a major negative PNA in place, which would keep the warm air in place across the US. Because it looks like the PNA index initialized incorrectly for one or both agencies, I will not be making a judgement on it right now.
The NAO, however, appears to have a general neutral consensus for the storm's timeframe, possible just coming off a negative NAO. I have a feeling that this slight -NAO period would still linger some effects into the storm's timeframe, which may be why the ECMWF is nudging the storm towards the coast after the Midwest, but nowhere near as drastic as the GFS displays, which looks to equate to a raging positive PNA, storm track wise, which is not what we will be seeing.

Caveats of this storm:
•Still very much long range.
•All models, including the ECMWF, are still subject to major changes.
•NOTHING is set in stone.

Tips of this storm:
•I recommend the ECMWF for model guidance.
•Watch the NAO/PNA closely in this timeframe.

If you have any questions, you may ask them below.
~Andrew
By Andrew at 4:00 PM 31 comments: Links to this post

We will update on the potential February 14-17 snowstorm at 4:00 PM CST
By Andrew at 2:56 PM No comments: Links to this post