The 12z ECMWF model is printing an interesting solution. At 7 am October 19th, the ECMWF shows considerably high relative humidity values fairly close to the surface while the 540 line (line that theoretically separates rain and snow) has collapsed southward, allowing for a rush of frigid air to invade the Great Lakes. These relative humidity readings got me thinking: Does this mean the ECMWF is pointing towards snow? And since this is the best ECMWF in terms of maps we have available, I do believe that there is potential for snow in the areas in green, especially in darker green shades in the lower 2 images, which are relative humidity images.
By Andrew at 11:45 PM No comments: 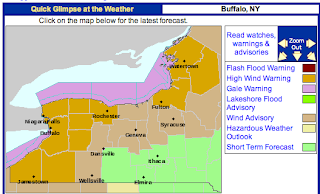 Northern and Western portions of New York are under a high wind warning, including Buffalo, NY. It does appear high winds will be coming off the Great Lakes, pushing wind gusts to as much as 55 MPH as shown in the National Weather Service forecast for tomorrow.
Since leaves remain on the trees in Buffalo, concern is rising as these leaves will catch the wind and increase the potential for downing trees which may in turn down power lines. Leaves work like sailboat sails: The sails catch the wind and go forward. Leaves are mini-sails and also catch the wind. With a lot of leaves, these mini-sails will catch the wind and put pressure on the tree to collapse, while a bare tree likely would hold up as there would be no leaves.
Below is the NWS-issued forecast graphics for the region valid for tomorrow at 5 PM EDT. 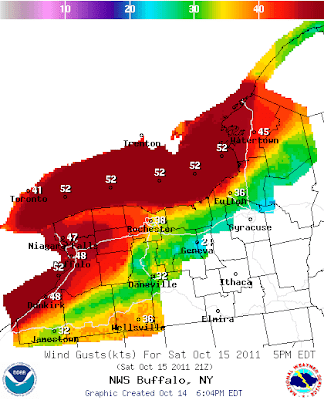 Notice the wind gusts reaching 48 MPH in Buffalo and 52 MPH just offshore a little ways south of Buffalo. Those are real wind gusts and are not to be messed with. If you live within a region in the High Wind Warning, be conscious of trees around your house that may collapse. Also be aware of power lines that may affect you and/or your property.
If you see a downed power line, do not touch it. Call your local authorities and stay away from the power line. Just because it is down certainly does not mean it is dead. You may electrocute yourself by coming in contact with a downed live power line.
By Andrew at 5:22 PM No comments:

This is our OFFICIAL 2011-2012 winter forecast storm track. Keep in mind all tracks are generalized, and color does not mean anything in terms of strength, etc.- it is simply to keep track of the lows in intersecting tracks.

RED: The red track is designed for clipper systems. We believe the upper Midwest will get the clippers, as usual, but with cold bursts, these may be pushed more southerly in some cases. We have not investigated this, but do believe out of common sense it is possible. Either way, with colder temperatures, the clippers will put down more snow than average from a clipper due to higher snow ratios.

BLUE: The infamous Panhandle Hooker storms are the most exciting storms. The monster February blizzard that shut down Chicago was a form of the Panhandle Hooker. Anyways, these may not set up for a while on account of the Southeast Ridge, which naturally directs storms north like the February blizzard shot north into the Midwest region from Texas. We also account this track for the Nor'Easter storms. There will be some of these, and we have to account for them.

GREEN: Sensing some wayward storms will go through this area, we figure it is the safest bet next to the clipper tracks. Why? Because, as a below weather enthusiast stated, the usually-unreliable CFS long-range model appears to have the general storm track down pat (which would affect I-80, north the worst), but this model finds quite a few chances to torch the nation in terms of temperature, which likely won't come to reality.

Email ThisBlogThis!Share to TwitterShare to FacebookShare to Pinterest
Because of your faithfulness as a viewer, we will release this winters storm track this afternoon!
By Andrew at 11:24 AM No comments:

Email ThisBlogThis!Share to TwitterShare to FacebookShare to Pinterest
For further updates, check our facebook page for noontime updates instead of here on the blog.
By Andrew at 10:13 AM No comments: