3 Reasons Why the Arctic Oscillation Will be Negative This Winter

As we approach winter, we begin to look at how certain atmospheric patterns will turn out for the season. I have found three reasons why the Arctic Oscillation should turn out negative this winter. 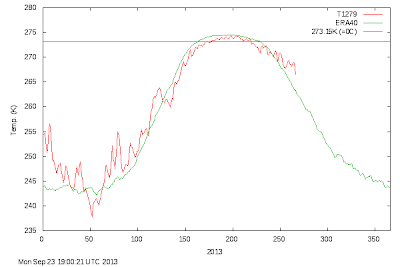 This chart above shows observed sunspot values on a monthly basis, with the average trend line shown in blue. The forecast line is in red, but since it obviously has not verified and will not verify in the future, we will disregard the forecast. Notice how low we are in terms of sunspot activity now when compared to the beginning of this century, on the far left of this graph. Did you notice that the winter of 2011-2012 was warmer than normal? Take a look at the trend line for the area right above the number '12' and you can see a bump up in sunspot activity right as it crosses that '12' line. There's no coincidence here; the spike in sunspot activity did affect the winter of 2011-2012. Did you feel colder than normal for the winter of 2009-2010? The sunspot graph agrees- we saw a cold United States in that winter, as well as a minimum in the sunspot count. Now, as we progress towards the winter of 2013-2014, sunspot numbers will begin to fall off again. Chances are elevated that we see a cooler winter than those in the last few years due to, among other things, a weakening sun. With a weaker sun comes a weaker polar vortex and jet stream, helping lead to not only a negative AO, but a cooler winter.