The latest forecast from the Climate Prediction Center on the 200 hPa level indicates that conditions will turn favorable for a late season spurt of tropical activity in the Atlantic.

The 200 hPa level is the level roughly where the jet stream is focused, and is associated with the Madden-Julian Oscillation, or MJO. Pushing past the conplicated aspects of the MJO, when you see below normal wind speeds at the 200 hPa level (green in the image above), conditions tend to be favorable for tropical cyclone formation. When this happens, the MJO is classified as being in Phases 8-1-2, all three of which can be favorable for tropical cyclone formation in the Atlantic.

The Madden-Julian Oscillation is headed to these three phases over the next few weeks, and one can expect an increase in tropical cyclone formation. We have already seen Patty and Rafael form in the last 7 days, and I am expecting at least another storm to be named in the next month as the MJO gets into those phases that get the Atlantic energized.

Many models are projecting amounts of rainfall that would create quite a flash flooding problem overnight. Let's take a look into this potential. 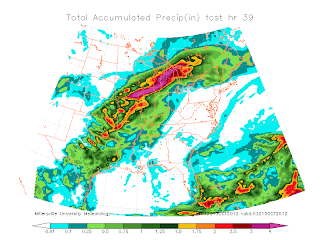 The 12z WRF model is projecting many spots to surpass the 4 inch mark, something that may set a challenge to sewer systems of less populated towns. Like the Gulf Coast, the general population tends to believe that since New Orleans has a powerful levee system, the entire Gulf Coast is now safe from flooding because every other town on the coast has the same powerful levee system. Not the case- many towns have levee systems that are miniscule in comparison to New Orleans. In this case, many believe that, since Chicago and St. Louis have big sewer systems, flash flooding won't happen. For more rural towns and some suburbs, the threat of flash flooding is much more of a problem, as their sewer systems are not as advanced as bigger cities'. 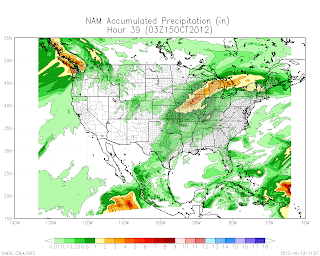 The 39 hour total precipitation forecast from the 12z NAM puts many of the same areas under 4 to 5 inches of possible rain- a huge feat for many sewer systems. Models vary greatly on final rainfall totals, but even the possibility of more than one model presenting such a big number is something that is quite alarming.

If you follow the Lezak Recurring Cycle, you will have to watch this system- it may very well come back in early December!

Andrew
By Andrew at 8:57 PM No comments: Links to this post 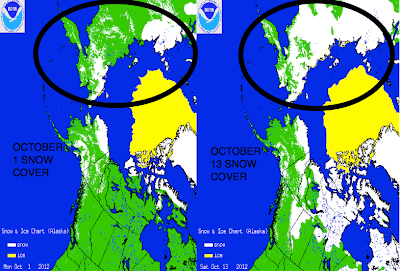 Siberia has developed a healthy snow pack in the past two weeks, with snow now covering much of northeastern Russia. Such a sudden increase in snowpack suggests a cold weather is on the way for the winter.

There is a proven correlation between Siberian snow cover in October and subsequent above or below normal temperatures in the following winter over North America. It has been observed that this snowpack correlates with the Arctic Oscillation, or AO, to make these temperatures fluctuate. The past two weeks have seen a rapid build of snow cover over Siberia and nearby regions of Russia. The presence of such a snow pack suggests a quick and cold start to winter may be on the way. I will be tracking Siberia through October to see what else we can expect for this winter.

Things are looking up for a cool start to winter. The question is, can it last?

Andrew
By Andrew at 7:13 PM 2 comments: Links to this post 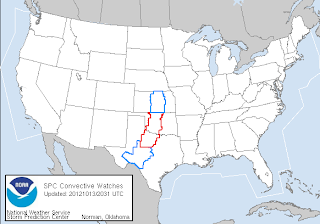 Three severe weather watches have been issued for the Plains. Two of these watches are severe thunderstorm watches, while a large watch box has been put out for parts of Oklahoma and Texas.

Surface based instability is very high in Texas, where some very strong storms are currently being observed. Considering the Storm Prediction Center is placing the tornado threat to the north, it appears large hail and damaging winds are the primary threats for the Southern Plains.

There is a lot of spinning ongoing in north central Texas, combined with abundant shearing and a very active environment, the chances for tornadoes are high. A tornado warning has already been issued to the north of Abilene.

TODAY IS A STORM ACTION DAY.

Andrew
By Andrew at 3:39 PM No comments: Links to this post