I have upgraded this storm title from 'Potential Significant Winter Storm' to 'High Impact Potential Blizzard' on account of recent model forecasts. 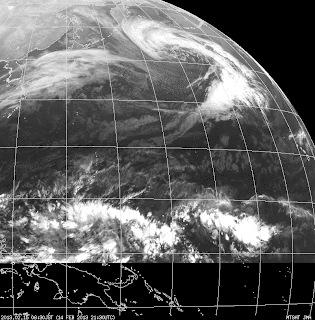 Current satellite analysis from the Japan Meteorological Agency (JMA) reveals that our storm system continues to kick up quite a ruckus in the North Pacific. A solid dry slot and enhanced cloud curving around said dry slot/low pressure center affirms that our storm system is quite a strong one. Further analysis on other charts indicates that the storm system is down to 968 millibars, with hurricane force winds. Usually, these types of systems are reserved for the Bering Sea, but this is the one we're watching to hit potentially a very large swath of the nation with intense accumulating snow.

In the interest of model forecasts and public awareness, I have upgraded the storm title to reflect my current outlook on the situation. Shown above is the latest ECMWF (henceforth referred to as the European model) model forecast for Hour 192, or 8 days from today (henceforth called Day 8). We see a very strong area of low pressure on the Illinois/Indiana border at this time, with very cold temperatures in the storm's wake. Analysis of pressure values around the Plains and Midwest reveals this storm to have a central minimum pressure of 995 millibars. That's a pretty strong storm system. Tight pressure contours to the west and north of the system suggest a blizzard potential with this system, hence why the title has been changed. The European Ensemble system, commonly regarded as the best ensemble prediction center known to man, agrees with the potential for a winter storm in this timeframe:

Somewhat low confidence is reflected by the broad-ness of the system by the ensembles. This is very common to see in the long range; the surprising thing is that the ensembles are even showing such a potential this far out. Their support behind this very interesting storm system adds confidence to my prediction for this storm system. Several other models and ensemble sets are in agreement but will not be shown to save space. Among the supporters are the American model, the American ensembles, and the Canadian weather prediction system has been known to previously support this idea.

A big concern is that this storm will be going extremely slowly. If the storm goes extraordinarily slow, we could see this storm system drop significant amounts of snow for over 24 hours. If current forecasts verify, some places may see over 36 hours of continuous snowfall. Accumulations would only grow if the storm continues to become slower in future model forecasts. This is another reason why I added both the High-Impact and Blizzard titles to this storm system.

For those of you wanting to see the European's snowfall forecast, here it is through 10 days out:

Here is an excerpt from yesterday's post on this storm. I am reposting it because it still contains my best thoughts as to what the storm could do.

I could go on and on about other models and ensembles supporting such a solution, but we need to take a step back and analyze the atmospheric pattern that will be in place when this storm potentially occurs. 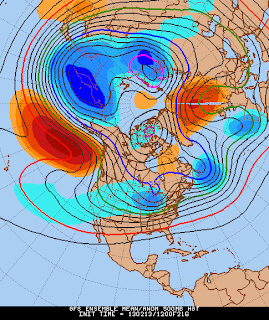 This is the American ensemble forecast, yet again for 9 days away from today. The colors show 500 millibar pressure anomalies, with blues signifying below normal heights (low pressure) and reds depicting above normal heights (high pressure). First and foremost, this system will be originating from the Pacific. If we look at the Pacific ocean, we find a very tight jet stream, shown as the 500mb pressure contours grouped very close together. This tightened jet stream adds increased energy to disturbances that flow through this jet stream. The pieces of energy may start off in the Bering Sea, where persistent low pressure is holding strong in this forecast. As they swing out from the Bering Sea, strong high pressure in the Gulf of Alaska tightens the Pacific Jet stream further. In response to the extreme above normal height anomalies in the Gulf of Alaska, low pressure would be tempted to develop in the Southwest. If we recall Newton's Third Law of Motion, every action produces and equal and opposite reaction. The presence of extreme high pressure in the Pacific will not only enhance low pressure in the Bering Sea, it will also do so in the Southwest. A concern from those two anomalies of pressure is that a Rex Block may set up. A Rex Block occurs when high pressure is stacked north of low pressure. We can see this trying to happen in the West US, with that Pacific high pressure apparently trying to progress into the Pacific Northwest region. Persistent low pressure in the Southwest would finish out the Rex Block. A Rex Block induces a more zonally-oriented (west to east) wind flow that is more favorable for warm temperatures and not big coastal storms. Fortunately, these concerns are alleviated when looking at other ensemble forecasts near this timeframe.

However, all hope is not lost for those in the Midwest. Rather, it is enhanced. This is the forecast from several global models and ensembles for the North Atlantic Oscillation (NAO). In the negative NAO, high pressure forms over Greenland and stays there. In response, the jet stream will dip south into portions of the US and produce an environment favorable for coastal storms (aka Nor'easters). We see a fair consensus of a negative NAO during the timeframe of this potential storm. The strength of this negative NAO is TBD, but the general idea of a negative NAO is in place.
The North Atlantic Oscillation then gets more specific with the West-based and East-based phases. The West-based negative NAO means that high pressure over Greenland is centered to the west of that land mass, hence west-basednegative NAO. It is this specific phase that is best for Nor'easters. The East-based negative NAO means that high pressure is strongest to the east of Greenland, and this means storms and cold are preferred in the Midwest over the Northeast. Looking over more model forecasts, the negative NAO will be nearly evenly distributed among both regions, but the East-based is definitely a favored phase by the time this storm's timeframe rolls around.
The negative PNA will set off the storm originally going through the Southern US, but high pressure in the Southeast will try to force it north into the Northern Plains, a common storm track this winter. However, the east-based negative NAO will suppress that high pressure to the point that the storm system is able to stay on a more eastward track that then goes through the Midwest and Lower Great Lakes, delivering snow to those areas. For those wondering if the Southeast ridge could disappear and the storm goes up the coast, chances are nil. The negative PNA, having a stronger influence on the US weather as it is upstream from the nation, will make the Southeast ridge prevail to an extent that matches my description in the first few sentences of this paragraph.

My current prognosis remains the same as yesterday. It will have to be altered to spread further north (just to cover some more of the Plains, that's all), but I want to see another round of model forecasts before I make a serious change. 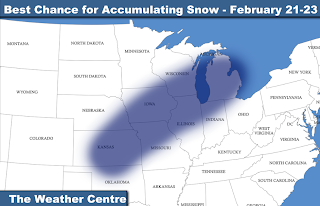