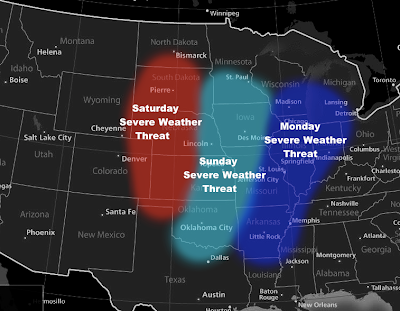 A significant severe weather outbreak may hit the Plains and Midwest this weekend. Although the title does not indicate it, this event is still rather uncertain and is not set in stone.

Synoptic set-up begins with storm system digging through Northern Plains and pushing down towards the central Plains. Negative tilt will evolve with this system, and high pressure will blossom through the Midwest into southern Canada. As a result of this negative tilt digging southeast, instability and moisture will flow freely throughout the Plains and Midwest, resulting in significant severe weather potential. Saturday severe weather potential looks to be a stormy day for the Northern Plains, with the potential for all modes of severe weather. Sunday appears to be the most significant day of this trio, as the storm goes into a full-on negative tilt and gets the severe weather going. There is potential for a severe weather outbreak on Sunday evening, as extreme instability and a rather favorable environment for tornadoes takes over the area outlined in turquoise. We'll get a bit more in-depth on Sunday later on in this post. Monday looks to be an interesting day still, although at this point the storm system as become a closed low and the negative tilt has dissipated. We should still see a severe weather event for those in the dark blue, although the depth of this event is to be determined. When gathering all the facts for all three days, and after examining several modes of forecasting tools, I anticipate that a (potentially significant) severe weather outbreak will get going this weekend.


I went through a series of analog dates that were spit out by the CIPS system for Sunday evening. Precipitation is shown on the top left, 500mb vorticity values on the bottom left, and 300mb wind speeds on the bottom right. The only one we care about in both of these images is the bottom right image, which shows that date's 300 millibar wind speeds and pressure contours. The reason I want to focus on this is because we will be able to determine which analog dates are most similar to the upcoming severe weather event by looking for the negative tilt, where 300mb winds are to the southeast of the storm's center, and by looking for the massive ridge extending from the Midwest into Canada. We see both of these analog dates have these features we're looking for, though with varying strength in storm system and wind speed. Now that we have our two dates that best match up with this upcoming event, let's look at storm reports for both of these days.


We see both images had fairly solid severe weather events on their respective days, with June 8 1993 having the more active day. The fact that the 1993 date is more significant does not surprise me- the storm system is stronger in 1993 than 2004. It's also the reason why I believe that this event will turn out like what happened in June 8, 1993. The storm system that will be arriving this weekend will also be pretty strong, possibly a good comparison to June 8, 1993. 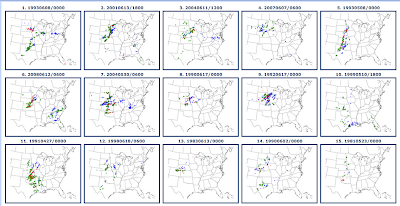 When looking at the top 15 analog dates that the CIPS system is putting out for this event, you can see why I'm concerned for this weekend. The top 9 analogs all had rather large severe weather outbreaks across the Plains and into the Midwest; not unlike what we could see this weekend. I feel that we will see this severe weather event centered in the eastern Plains and not so much in the Northern Plains as the June 8 1993 analog suggests. However, we're still a long ways out from this multi-day event, and multiple small-scale factors need to be determined before we can figure out who could be in the target zone for this multi-day event.