The stratosphere is telling us that the Central and East US may be in line for some very cold weather in the second half of December, and verification from its last cold weather indication says that we should be monitoring this development. 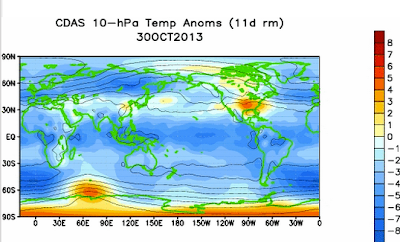 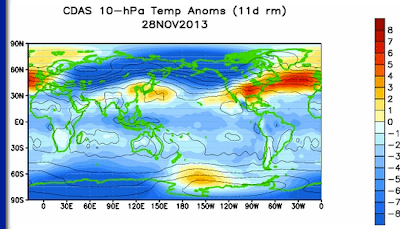 In the last few days, the upper stratosphere has suddenly sprang to life, with a wide swath of much above-normal temperature anomalies extending from as far west as the Rockies to the Eastern Seaboard, through the Atlantic Ocean and off to far western Europe. This would seem to hint at colder than normal weather making a return to the nation somewhere in the December 14-28 timeframe, roughly 2-4 weeks after yesterday (November 30th). Normally, I wouldn't be putting so much faith in the stratosphere to dictate temperatures for the next few weeks. However, with its stellar verification in the prior event, I'm willing to give this stronger warming event a shot. That said, I'm going along with this colder than normal prognosis for December 14-28 with low confidence, as there are a few other factors that may try and intervene to bring about warmer temperatures for this timeframe than what the stratosphere is suggesting. But until those come to fruition, I'll go ahead with the stratosphere's call for cooler temperatures between December 14th and 28th.

Andrew
By Andrew at 7:25 PM 5 comments: Links to this post

Stratospheric Warming Events May Be Suppressed This Winter

Latest data suggests the probability for stratospheric warming events is relatively low for much of the winter. While they are not completely ruled out of possibility, the likelihood of them happening is reduced.

To add to all the troubles the stratosphere is having, the Quasi-Biennial Oscillation (QBO), a wind-related oscillation entrenched in the stratosphere, is doing nothing to help matters. The QBO switches between positive/westerly and negative/easterly phases, where the positive QBO strengthens the polar vortex and the negative QBO weakens it. The Quasi-Biennial Oscillation had previously been in a deep negative trend, as shown by the solid negative phases and significantly weakened positive phases over the past few years. Now, the new positive QBO is breaking through that barrier and is at levels not seen for several years. To summarize, this positive QBO is bad for stratospheric warming prospects, especially now that the +QBO continues to strengthen. 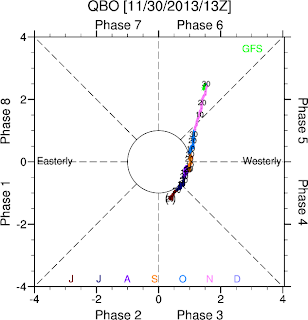 Michael Ventrice has been able to divide the QBO into eight phases, not unlike the Madden-Julian Oscillation. Each phase has its own mid-level (500 millibar) height anomaly distinction, as Mr. Ventrice's composite chart for December-January-February shows below.

As you can see, Phase 6 of the QBO (which we are currently in) promotes significantly below-normal height anomalies across the Arctic Circle, leading to ridging over the Southeast and East Coast, in addition to ridging over the Gulf of Alaska. This has been displayed well in the recent weather pattern, and medium-range forecasts show no end to the Phase 6 QBO. We are all looking forward to when (or if) the QBO enters Phase 7, which is projected to happen later on this winter. When the QBO shifts to phase 7, the composite chart tells us that high pressure will dominate the upper latitudes, leading to a favorable winter pattern over the Central and Eastern US. Now, this does not mean that the weather pattern will always be high pressure over the Arctic and cold in the Lower 48. But it does mean that those conditions become more possible/probable with the emergence of that Phase 7 QBO. However, until that Phase 7 evolves, we're really out of luck in the stratosphere, as the unfavorable QBO, anomalously weak eddy flux values and colder than normal stratosphere temperatures combine to create a trifecta of unfavorable SSW conditions.

Data in this post was contributed by Eric Webb.
By Andrew at 12:20 PM 7 comments: Links to this post

There is a chance that a snow and ice event may evolve across the Southeast over the December 8-9 period. 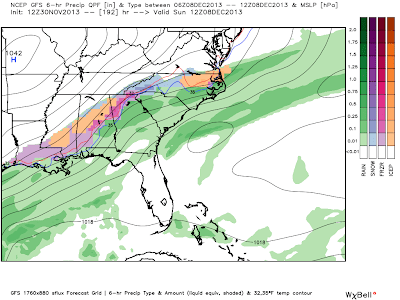 The GFS model predicts that areas of ice pellets, freezing rain and snow will begin to form across Louisiana, Mississippi, Alabama, Georgia, and North Carolina for the morning hours of December 8th, in conjunction with liquid precipitation falling across the rest of the aforementioned states. It appears that snowfall would be favored the further north you go, meaning North Carolina, far northern Georgia and upper Alabama would be under the gun for some snow. 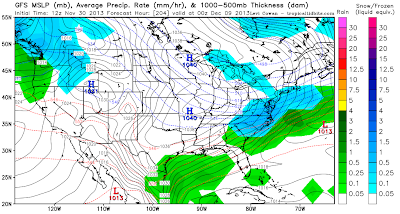 The real show begins just 12 hours later, in the evening of December 8th, when the GFS model indicates the precipitation switches over to rather heavy frozen precipitation, particularly across the Carolinas and Virginia. This image, provided by Levi Cowan, does not differentiate between different frozen precipitation types like the WeatherBell image did above, so we are only left to fear that this will either be a potent ice storm, or a decent snow event. The whole event itself is still in question, so there is a lot to still be figured out in the next several model runs. As always, updates will be provided when needed here at The Weather Centre.