Tropical Storm Chantal had a major collapse overnight last night, as the rather-unfavorable environment took a massive toll on the system.

Overnight, it appears that the storm system turned into an open tropical wave at a certain point, meaning it was no longer a tropical cyclone. This came as a result of just how bad Chantal was looking on satellite at that point. As of this morning, a reconnaissance plane from the National Hurricane Center evaluated Chantel. 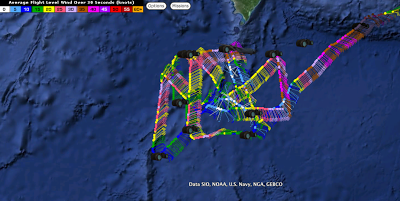 This image shows wind barbs from the recon plane's observation, with the barbs colored to illustrate the  associated wind speed. A quick glance from this image would see the strongest winds at around 45 knots in purple on the northern side of the storm, right to the left of the little plane icon.

If you look closely in the center of all of these colorful wind barbs, you will see a few white wind barbs. This illustrates areas of calm or nearly calm winds, which we identify as the center of the storm. I ran over a few of the reports from these white wind barbs, and the average surface pressure from the 4 I looked at was 10104 millibars. That's a very, VERY weak tropical cyclone, folks. It clearly shows just how much Chantal suffered overnight.

There's something else that happened overnight that is more concerning, in my opinion. As Chantal went through her overnight crisis, she did not shift northwest as was expected. Instead, the progressed west. This is not something we want to see happen. If Chantal maintains a westward path, chances are she will go into the Gulf of Mexico. And if Chantal goes into the Gulf of Mexico, we're going to have a big problem.

Analog tracks provided by Wunderground show tracks and strengths of storms that were in the immediate vicinity of where Chantal currently is. One look at this chart and it's apparent that the expectation for Chantal to move east of Florida has changed. As Chantal remains weak, I would expect her to hold a westward track and not be that involved in the northern component that was previously expected by other forecast models. This brings me to believe that we will be dealing with Chantal entering the Gulf of Mexico. 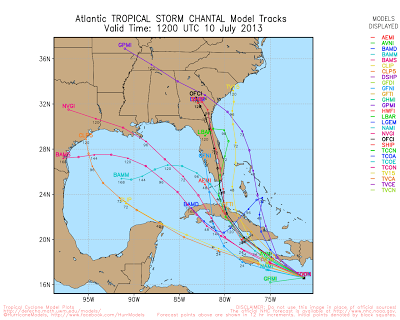 The latest suite of forecast models lost the consensus it had built up earlier. If you recall, nearly all forecast models agreed on Chantal moving just to the east of Florida, possibly impacting the Southeast coast. Now, however, the model guidance has disbanded, likely as a result of the turmoil that Chantal underwent last night. The official NHC track calls for Chantal to hit the tip of Florida as a tropical depression after moving through Cuba. Looking at the latest wind pattern that can very well determine where Chantal will go (image below), this track does appear to be a very possible one. At the same time, however, Chantal has a real chance of moving west some more and going towards the Yucatan Peninsula. Whether she hits that area or moves into the Gulf of Mexico is to be determined, and the possibility of her going to the Yucatan Peninsula is also TBD. It's like the red carpet is being rolled out for Chantal to move towards Florida, but when you're dealing with tropical cyclones, it's important to always expect the unexpected.

Andrew
By Andrew at 1:33 PM No comments: