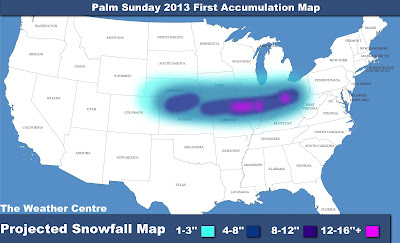 First accumulation map rides on most recent model trends and accounts for model majority. Current thinking is a major snowstorm will erupt from the Rockies and produce major accumulating snow across much of the Plains, Midwest and Ohio Valley. Latest model trends support amounts over one foot in some isolated areas, and it is these areas that are in the lowest confidence zones.

For my first forecast, I am predicting a light accumulation zone of 1-3 inches in the Lower Great Lakes and far northern Central Plains states like northern Nebraska and northern Iowa. Recent model trends have been showing these amounts, and in accordance with what seems to be the final track, I agree with model guidance on those amounts. General 4-8 inches is predicted from the Front Range in Colorado across the midsection of the Plains, through the southern Midwest and into the Ohio Valley. I'm liking the higher end of that scale for portions of central Nebraska, north central Kansas and towards I-80 in Illinois and south of Gary, Indiana. Darker blue depicts 8-12 inch forecasts. I expect these amounts to be most prevalent from northeast CO into border counties of Nebraska and Kansas. Keep in mind that this zone is uncertain, and will likely take another ~12 hours to determine where (and if) that higher accumulation zone sets up. A west to east line continues with the 8-12 inch predictions, cutting through northern Missouri and Central IL/IN into Ohio. Isolated spots in central Illinois, central Indiana and central Ohio could see 12 to 16 inches out of this event, more likely in the lower end of that spectrum.

Andrew
By Andrew at 3:16 PM 5 comments: Links to this post