Tropical Storm Nate Forms in the Bay of Campeche, off shore of Mexico

TS Nate has formed offshore the coast of Mexico in the Bay of Campeche. The NHC has not officially released tracks and wind forecasts for this system, but estimates are that Mexico and possibly the US will be affected. Here is the ECMWF portrayal of Nate. 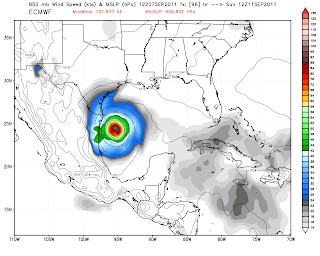 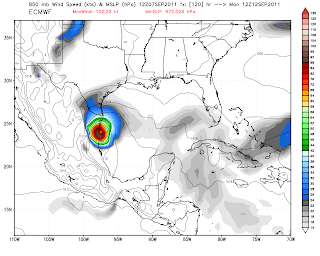 The ECMWF allows Nate to develop into a hurricane, then make landfall on Mexico, only affecting South Texas with outer wind bands. Only sprinkles may come from that system if this verifies. These forecasts are still considered 'long-range', so they will be changing over the next several days.
By Andrew at 4:46 PM No comments: Links to this post

Midwest Chill not Over, but Warming Trend to come?

The cold air mass stationed over the Eastern Half of the US will continue to stick around for at least another 5 days, but slow, gradual warming will occur during this period. Here's an 8-day portrayal of forecast temperature anomalies compared to normal temperatures.
Despite this cold air mass, warming is forecast by the GFS ensemble members. Below is an image of 10 days out temperatures.

Ensembles indicate the cold air mass over the US is forecast to dissipate as a warmer air mass moves in from the northwest US and Canada. Below is the Day 15 forecast temperatures by the same GFS ensemble members.

At this point, some GFS ensembles indicate strong warming is to take place in the Central US, but together they indicate the cold air mass fading and a modestly warmer air mass to move across the US.
By Andrew at 4:42 PM No comments: Links to this post

Katia has weakened to a Category 1 hurricane and will continue to go out to sea.
By Andrew at 6:33 AM No comments: Links to this post