What Systems Are We Watching for the LRC?

Recap of LRC:
-Pattern setting up between Oct. 1-Nov. 10 every year.
-Certain atmospheric features will repeat approximately 30-60 days after it occurs if this feature is within the timeframe mentioned above.
-Pattern repeats through winter, spring, into summer.
-Pattern is never the same each year.

Note about this year's LRC:
-Each cycle is 46 days long. That is, each system below would theoretically repeat every 46 days.


SYSTEM 1: October 19, 2011
An Upper Level Low was cut off from the jet stream on October 19th. The piece of energy stayed in place, putting precipitation over the same areas for a couple days, before it was nudged north back into the jet stream. Over this time period, the equivalent of around 6 inches of snow (that originally fell as rain on October 19) fell over the Michigan area/ Ohio Valley. This same system is currently repeating at the time of posting. Because this is happening, the chances of the next system occurring are rising.
SYSTEM 2: November 9, 2011
A possible Panhandle Hooker storm came up into the Midwest/Great Lakes region, putting down impressive precipitation totals. In the 3 days pan that was measured, as much as 1.97 inches of rain was recorded in the region most affected. This would easily equate to 20 inches of snow. It's pretty crazy to think that 20 inches of snow might fall in one area every 46 days. But if the LRC pans out, the atmosphere might be able to pull this feat off. The chances of this are increasing as the 1st system is panning out. If the 46 days are true, then this system could be coming back around December 28th- right after Christmas.
By Andrew at 7:58 PM 11 comments: 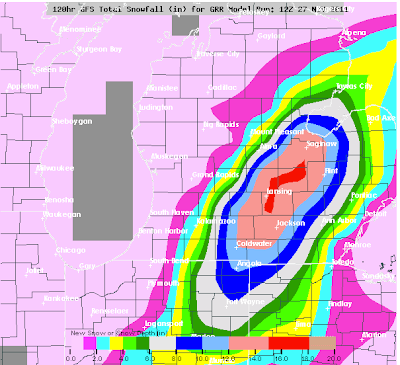 The 12z GFS is forecasting a devastating snowstorm for Michigan on November 30. While the image above encompasses 5 days from now, we have investigated and these high totals do come from the November 30th.
The interesting thing is how the NAM does not bring this solution to light. It appears that the models are divided into two camps:

(GEM has mostly rain but back-end snow, will not put in category)

I would say that there ought to be a snowstorm, but may not be as severe as some models are projecting.
By Andrew at 3:08 PM 3 comments: