Preword: Recently, I have been caught up in the swing of the stratosphere and investing all of my confidence in just a few factors. Starting today, I will present the good and bad sides of the forecasted weather, even though you may not find it as exciting as my other posts. 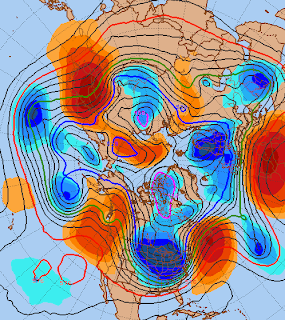 In a disastrous recurrence of last winter, the winter of 2012-2013 has so far brought little snow and only modestly increased cold in comparison to last winter. Don't get me wrong, this winter has had many more advantages than last, but still remains dismal. The long range will be a classic, painstaking case of some factors looking good while other factors ruin the party. We start with the current 500 millibar anomalies over the Northern Hemisphere. Blues indicate low pressure areas and reds show high pressure regions. Deeper shades of each color indicate stronger modes of their respective pressure systems. We can see a deep blue positioned over the Great Lakes in the wake of a very powerful storm system that impacted much of the nation's population. This area of cold will move on out of the region later on as we head towards the weekend. I want to turn your attention to eastern Asia in the upper right-hand corner of the image. See that massive high pressure system there? That will provoke high pressure in the United States as we enter next week and into the following weekend, and we could see another bout of above normal temperatures. Snow cover that was received in the past couple of days could be eradicated. This comes at a time when high pressure finally emerges into the West Coast, a good sign for cold and snow in the Midwest and East US. But, as a result of the forecasted high pressure system, it will be Alberta clippers that bring the best chances for snow. 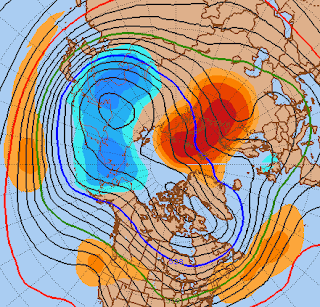 We now move ahead to Mid-February. There is no longer high pressure over East Asia, but persistant low pressure anomalies. These low pressure anomalies would then inspire a stormy period to round out the month of February. Could these storms hit the Northeast? I'll discuss that a bit later down this article. Something that certainly is not good is that persistant low pressure in the Bering Sea. This goes with my 'some good, some bad' forecast, as this persistant low pressure in the Bering Sea can lead to above normal temperatures in south-central Canada and much of the northern United States. Even more depressing is the lack of Greenland blocking. Greenland blocking is the phrase that is used to reference persistant high pressure over Greenland. When that set-up happens, the atmospheric pattern is more inclined to introduce more wintry weather into parts of the US. A lack of this blocking leads to a more zonal, west-to-east jet stream that allows for warm temperatures and not many storms. It is very possible some of that high latitude blocking in eastern Europe (shown in deep reds) could migrate over to Europe, but that remains to be seen. Frankly, I'm not that optimistic on the idea. This dismal explanation is verified by slight high pressure in the New England area, likely as a byproduct of the low pressure in the Bering Sea, and in response to a lack of Greenland Blocking. One bit of good news is the forecasted high pressure over the Pacific Northwest. If you get high pressure in that area, the jet stream can be persuaded to dip south and let out some cold into the Northern US. Storms tend to follow a jet stream that favors wintry weather for those same regions, the Midwest and Ohio Valley for example. 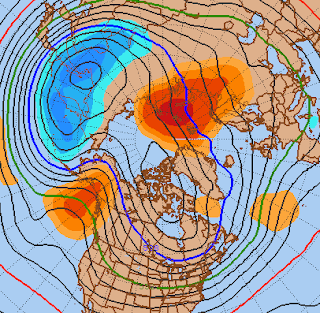 Lastly, looking ahead to the heart of February just a few days after the above image, we find that the atmosphere has changed. That high pressure that was in the Pacific Northwest has now migrated into the Gulf of Alaska. This situation can then go one of two ways. The first option is for high pressure to then spread back on land into the Pacific Northwest, or the high pressure pushes west into the Bering Sea. Both moves would support a cooler pattern in the North US, but I'm not betting on it at the moment, as the consensus is not overwhelming and we are over 2 weeks away from this forecast image. We still see persistant low pressure in East Asia, adding to my theory of a stormy end to February. Also, we then see the forecast emerging for some spotty patches of high pressure in and around Greenland. Such an action could provoke a better pattern for the Northeast (notice the high pressure in New England is gone), but it's too far out for me to think about accepting or rejecting this idea.

So we could see some storms in late February, but the big story will be warmth in mid-February, with Alberta Clippers dominating that scene. Early February will be when the effects from the sudden stratospheric warming dies off, so that will add to the troubles the cold may face in the coming month.