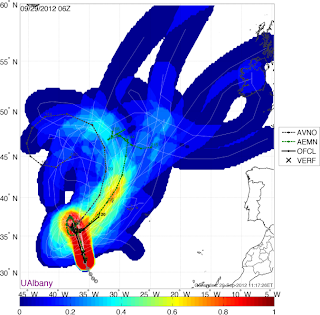 "Hurricane Nadine? I thought she was gone!" You might be thinking this. But, Nadine actually reformed a while back, and has been chilling out in the Atlantic as a hurricane. As of now, it is a Category 1 hurricane, and is no threat to North America. However, Europe may be at risk.

The image above shows the forecast track probability off the 0z GEFS for Nadine. The consensus is next to nothing, but the models appears to move northwest before making a loop and moving east-northeast. From there, the models drop off in a wild spread.

This unknown track comes as Nadine closes in on the longest-lasting tropical cyclone record in the Atlantic. The record is 28 days, and is held by Hurricane San Ciriaco from August 1899. This is no 20 year record, we're talking over 2 centuries that this record has stood. Nadine is currently at 18 days, just a week and 3 days shy of tying the record.

Looking at the models, it looks like Nadine may die off if she is to move northeast into a less favorable environment. Should this happen, Nadine would probably break the Top 10 chart of longest-lasting tropical cyclones in the Atlantic. Number 10 is a 19.25 days (1 day above Nadine) in September 1893, held by a storm called 'Storm 9'.

Andrew
By Andrew at 11:29 AM No comments: Links to this post

Snow May Fall In Midwest As October Begins

There appears to be a possibility for some snow on the morning of October 8th in the Midwest, possibly as far south as Chicago, IL and Gary, IN.

This potential snow event looks to be in the early hours of Monday, roughly around 1 AM central time. All thickness lines, minus the yellow 1000-850mb thickness line, are south of the projected precipitation. Now, this could very well be cold rain or a slight ice event, but I think that cities like Milwaukee have a shot at flakes flying, while Chicago has a lesser potential for such activity. Not a zero chance, but less than areas to the north.

The 6z GFS does show some very slight accumulations in central and southern Wisconsin, but nothing major.

(Caption copy-pasted from COD-NexLab)
By Andrew at 10:28 AM 3 comments: Links to this post

Coldest Weather Of The Season On The Way 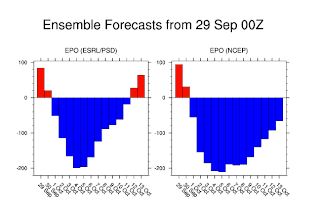 The Earth Systems Research Laboratory (ESRL) and the National Centers For Environmental Prediction (NCEP) are agreeing on a strong negative EPO going into the first week of October, something that could have major implications on temperatures.

The East Pacific oscillation, or EPO, has a positive and negative phase. In the positive phase, a stormy pattern in the West and warmth in the East is a common sight. However, these two agencies are both predicting a very negative pattern. This would lead to an enhanced potential for cold air to work its way into the East, while high pressure sets up across the West.

The Arctic Oscillation, another major factor in bringing cold air to the States, looks to be dropping negative going into the first week of October. This negative EPO, combined with the negative AO looks to be a perfect storm for some cold weather.

These two indices look to produce a very chilly first week of October for the East. I would not be surprised to see cities like Chicago, Milwaukee, or possibly Indianapolis reaching into the 30's, possibly getting below freezing at times.

You heard it here first at The Weather Centre!

Email ThisBlogThis!Share to TwitterShare to FacebookShare to Pinterest
Related: Fall is Here series 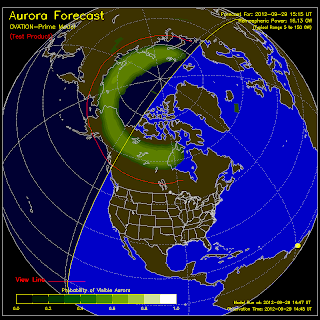 A flare released by the sun yesterday is expected to make impact with the Earth in the next several hours, producing the chance for widespread auroral viewing across southern Canada, and possibly areas in the extreme Upper Midwest.

The Planetary K index has not yet risen to high values, so we do not know how strong the aurora will be or how far south it will stretch. I will have a much better feel on this by tonight, and will issue a post concerning the aurora's extent by then.

Persons with jobs in the electrical, astronautical or those residing in the higher latitudes should be aware of possible damage to transformers, corrective orbital action needed for satellites affected, and power loss in higher latitudes.

Andrew
By Andrew at 9:58 AM No comments: Links to this post