In week 1 (top), the CFS v2 is indicating extremely warm temperatures to be present across all of North America- an uncommon feat. The only exception is Alaska, which is forecasted to be much below normal. The unusually warm spring theory looks to be off to a great start per these CFS v2 forecasts.
Week 2 (bottom) still has a huge area of much above normal temperatures, but as the forecast period increases, so does the uncertainty, thus the lessened intensity of the temperature forecasts. However, Alaska still remains much below normal.

In week 3 (top), a large swath of above normal temperatures still exists over the North America, but here's the thing- notice how Alaska is no longer cold. This could very well mean that the infamous Alaskan Vortex could be replaced by a ridge, thus lower temperatures in the US. But this is not reflected in the US, meaning that some other indices may be influencing the pattern to disprove the possible below normal temps and keep them above normal.
The same situation exists in week 4.
By Andrew at 6:03 PM 3 comments:

Here is the week 1 (top) and week 2 (bottom) forecasts from the CFS v2 of precipitation for North America. Unsurprisingly, the Northwest will remain wet as systems continue to crash ashore. Perhaps the most significant parts of this forecast is the dry East and wet South Plains. The dry East US indicates that warm air should continue to be in place with one or a series of ridges of high pressure. The wetness in the Plains indicates where severe weather would strike with any system in the next few weeks.

For week 3 (top) and week 4 (bottom), the colors are less intense as a result of lower confidence as the forecast period increases. However, we can still see dry patches in parts of the East US, again saying that ridges should be fairly common in that area. However, the forecasts are indicating the area of precipitation to move east, meaning that the possible ridges would be losing ground against storm systems.
By Andrew at 5:57 PM No comments:

Here's the week 1 (top) and week 2 (bottom) forecasts from the CFS v2 model for the jet stream. positive anomalies indicate a amplified jet stream, while blues represent a more subtle jet stream. For week 1, the US will be under a pretty de-amplified jet stream as it will be pushed further north into the Canada/US border, which is just out of the picture. The same story goes for week 2.

For week 3 (top) and week 4 (bottom), the colors are less intense as the forecast period and uncertainty grows. However, it is still reasonable to see that the jet stream will remain displaced north per the arrow directions.
By Andrew at 5:42 PM No comments:

The Storm Prediction Center has issued a slight risk of severe weather for tomorrow as the remnant pieces of convection push away from its original position, which is in Arkansas and Texas.

To be honest, I'm not seeing it in the cards to have severe weather in the areas highlighted. A few minutes after eyeing this, I checked out the SPC's SREF ensemble suite for the 3 hour calibrated severe thunderstorm risk. It is showing nothing in the next 30 hours for the slight risk area. There is a little something showing up on the SREF's general calibrated thunderstorm outlook, but it is showing a 20% probability of storms in general. This makes me think 'Something's not right.' So I take it to the University of Illinois' WRF member suite.

All available members as the University of Illinois WRF member suite are showing general showers and a possible embedded thundershower for the area in slight risk, with the stronger storms down south. Now i'm pretty confused. The storms appear to be trying to hit at the afternoon, which is reasonable, but the WRF members are not showing action in Northeast Illinois. North Michigan looks like it will be in for a little something, but I feel like the models are not giving the NE Illinois area anything worth issuing a slight risk area for.

The NAM is finally the model I find that seems to have provoked the SPC to issue a slight risk, and here's why:

This is the Significant Tornado Parameter (STP) forecast from the 12z NAM. Values of 3 and higher are considered elevated. The NAM is showing values of up to 5 in Southeast Michigan and parts of Indiana. The 12z NAM is actually showing a higher risk than the 6z NAM, but not much higher.

Considering the lack of model agreement and potential for clouds out ahead of the storms, I'm not too keen on accepting a severe weather risk.

The Storm Prediction Center extended the slight risk of severe weather south along the Gulf Coast, which was a very good choice in my opinion, as strong storms were forecasted to be ongoing in that area at some point.

A storm system will be moving northeast, with a pool of cold air behind its cold front. As it moves east, the cool air will crash into the warm, Gulf air that is providing this unseasonably warm weather. The result is severe weather.

Instability forecasts have not changed too much, with only minimal amounts expected in Arkansas, where the highest tornado threat is at this point. Despite this, CAPE (instability) values of 500 j/kg are pretty widespread across Texas right now, meaning the instability could be a bit higher than previously thought. 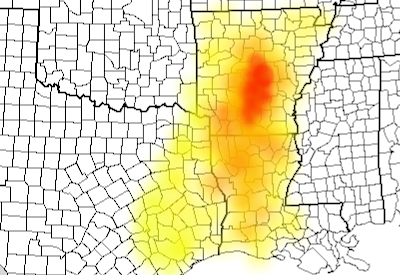 Here's what I am expecting today for severe storms. The yellow signifies a general risk of strong thunderstorms. The orange represents a risk of some severe thunderstorms with the threat of some severe weather reports (hail, high wind, tornado) being called in. I did add a small area of red to the picture, signifying that I am expecting a tornado somewhere in that area.

I am rushed on time today, so this graphic is based off of the Storm Prediction Center with the oranges and reds, and I do apologize that I do not have enough time to concoct my own forecast map this morning.

Remember- Daylight Savings Time begins today, so set your clocks forward one hour.
-Andrew
By Andrew at 9:47 AM No comments: