It is becoming increasingly apparent that three big atmospheric factors will have to combine in an Arctic Trifecta to make for a brutal end of January into February.

Part I: The Stratosphere

The stratosphere is one of the three big factors needed for a brutal back-end winter, as it is where the polar vortex is based. If we want cold weather, we need that polar vortex to break down.

Observed temperatures are shown on the two graphs above, with the 1 millibar level being shown in the top image, and the 10 millibar level temperatures depicted on the bottom image. These two images show a spike in temperatures in recent days, and this is in response to the big sudden stratospheric warming (SSW) that is in India and spreading across much of Asia as an extreme SSW. The 50 millibar ongoing SSW has yet to be recognized at that level. Nonetheless, any progress is good progress as we will now see a round of damage be inflicted upon the polar vortex. This is the first warming of three that I am concerned about as far as implications on the polar vortex go, so we will move right along to the second warming.

The second warming event should take place in the next two weeks, and the ECMWF model is pinpointing its appearance in the 9-10 day range. Shown above is a forecast image of temperatures across the stratosphere and troposphere, the latter layer shown in the bottom part of the image. We want to pay attention to the upper stratosphere in this case. We see significant warm air anomalies prevalent in the upper stratosphere between 70 N and 90 N. A look at Days 6-8 forecasts reveals this warm air intrusion is only beginning on Day 10, and such an intrusion is signifying that, yes, the second warming event should be ongoing through Days 9-12. I cannot be confident on that timeframe, considering the ECMWF only goes as far out as Day 10. Any way you put it, this significant warming in the upper stratosphere bodes well for extensive damage being put on the polar vortex.

The negative zonal wind anomalies at the top of the right hand corner also suggest a second warming event is in the making. Notice the now-weakened polar vortex between 30N and 50N. This will only get weaker with this second warming, if the second warming turns out to be near the significance that the currently-ongoing one is having.

Skyrocketing heat flux forecast values and a downward-propagating geopotential Wave 2 forecast enhance the chances of a good second warming in the stratosphere:

If the geopotential Wave 2 does propagate downwards with its higher heights (high pressure, observed by the warmer colors in the top image), one can expect lower stratosphere disruption in the polar vortex. It doesn't matter if the polar vortex is gone in the stratosphere- it only matters if the troposphere feels the effects, and that's what we need right now to make sure this trifecta can happen. As far as the heat flux goes, it is nowhere as strong as the ongoing SSW, but again, progress is progress, and after a fairly dismal December, we will need all the help we can get.

And then there's the chance for a third warming. This third warming, if it were to happen, would come at a time when the polar vortex has already been split into multiple pieces and absolutely decimated on all levels as far as strength goes. Suppression south is beginning to occur with the remaining polar vortex pieces, meaning Eurasia and North America would begin to feel an Arctic chill.

This suppression is well observed in this long range GFS forecast, which shows the polar vortex entering the Great Lakes region. Temperatures as low as -30 are observed in the upper Midwest, and cities like Chicago, Quad Cities and Gary would experience temperatures well below 0. This is just one of many possibilities facing us if this third warming event comes to fruition.

I should note that the lower stratosphere is predicted to have a good piece of the polar vortex in southern Canada during this same timeframe, meaning that the stratospheric effects are propagating down to the surface. Cold air would certainly be in order for much of Canada and possibly the US if the polar vortex made its way close to the US. If it ENTERED the US, record-breaking cold is more than possible, but I want to wait several more days to let the GFS sort itself and any forecast errors out.

There is an atmospheric pattern called the Cross-polar flow that is widely acknowledged as the pattern that brings the coldest air to the US the easiest. The term originates from the way a strong ridge of high pressure builds into the Gulf of Alaska to the point that the jet stream actually has to cross the North Pole to get north of the high pressure in the Gulf of Alaska. From there, the jet stream collapses south into the Rocky Mountains, transporting frigid air as it goes. We are seeing good signs of the cross-polar flow setting up in the long range. 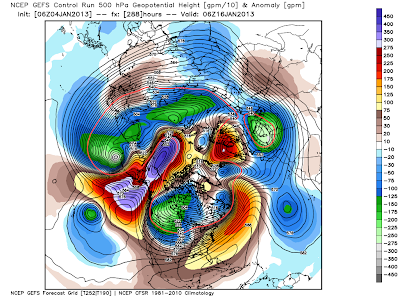 For example, hour 288 of the GFS control model run shows a fantastic cross-polar flow ongoing, with extreme ridging happening from the Gulf of Alaska to the Arctic Circle. The jet stream is then observed shooting south into the West US, with significant cold air following the jet stream. This pattern also opens the door for a McFarland signature, which is the death-bringer to crops everywhere near the Rio Grande. As observed by McFarland, an atmospheric pattern will set up in which high pressure will build in the East, and low pressure in the West. A severe arctic outbreak will press east across the nation, and anomalous high pressure will build in its wake, holding the nation in a deadly Arctic outbreak. This forecast certainly shows some McFarland characteristics, but for now we will just focus on the cross-polar flow.

The ECMWF model and ECMWF Ensembles also try to build some cross-polar flow, albeit to a much weaker degree than the GFS control:


Don't immediately bet against the GFS control. The ECMWF Ensembles naturally have to be weaker than the individual model forecasts because the ensembles are just that- ensembles. They are composed of multiple forecasts and are only showing an average of the members' forecasts. It is entirely plausible that 50 of the 51 ECMWF ensemble members show extreme Gulf of Alaska ridging, but one member shows record-breaking low pressure anomalies in the Gulf of Alaska. While that's most likely not happening, just remember this is an average of dozens of individual forecasts.

The third and final part of this Arctic Trifecta is the teleconnections, particularly the North Atlantic Oscillation (NAO) and the Arctic Oscillation (AO). In the negative phase of the NAO, the jet stream buckles south to bring cold and storm systems to the Northeast, while the negative AO brings about a cold weather pattern across the nation. Both of these oscillations ca be detected by models, so let's see what they show. 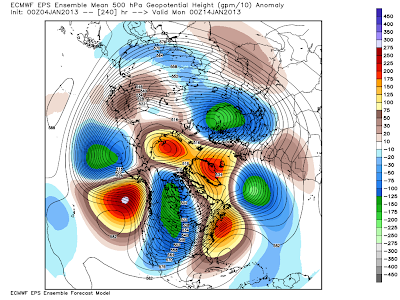 This Arctic Trifecta can work out very easily, I have no doubt about that. The question is, can the negative PNA turn into more of a McFarland signature to push the cold east, or will it persist in the West? If persistance occurs, cold prospects are dimmed. However, the breakdown of the polar vortex practically assures that some degree of colder weather will be forced into the US- it's how cold that is the question.