The GFS continues to indicate that the first snow of the 2011-2012 winter may be upon the Northeast as soon as October 28th. For the past several days, the GFS has been trending for this solution to come to realization. The ECMWF, considered one of the better models in winter weather forecasting, is bringing over 4 inches of snow to the Northeast. Below is the ECMWF Snowfall for Oct. 27 at 8:00 PM EDT, then October 28 at 2:00 AM EDT. 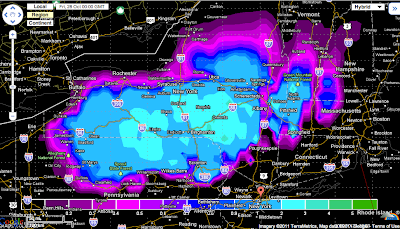 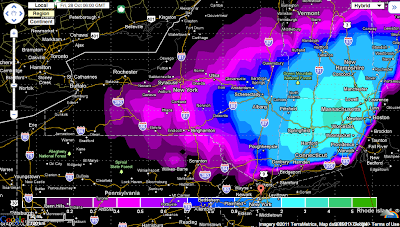 Get excited, northeast folk- this one looks promising!
By Andrew at 5:54 PM 4 comments:

Rina has become a hurricane and is currently at Category 1 hurricane status. As per the NHC, Rina is forecast to move westward into a NW direction, take a sudden North turn to apparently avoid hitting land. After that, the NHC believes Rina will move in a general eastward direction. I do not trust the last couple track points on this chart, as they have been changing in the last few image updates the NHC has issued on Rina. 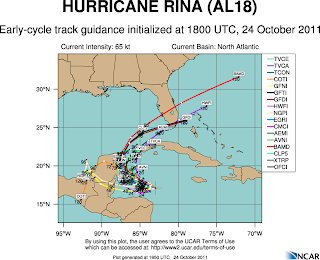 The ensemble members tracking Rina remain in a fairly confused state, but a few models still show this hurricane making its way to Florida. It will still be awhile before we can find a consensus on this Florida track, if there will be one. 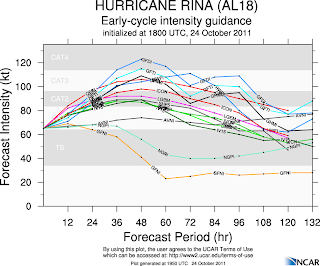 Intensity models remain in a high placement for forecasts, with most models extending into Category 2 strength and Category 3 strength. Is it possible a major hurricane could hit Florida? Possibly, but this late in the season? Probably not.
By Andrew at 5:43 PM No comments:

The NHC is projecting newly named Tropical Storm Rina for move in a wobbly WNW direction in the next several hours, then making a sharp north turn while nearing the shores of Mexico. It is as if Rina is swerving to avoid crashing into land. As it does so, the NHC forecasts the system to reach hurricane status. At that time, the forecast time frame runs out, so we turn to ensembles, which have an interesting take on the situation. 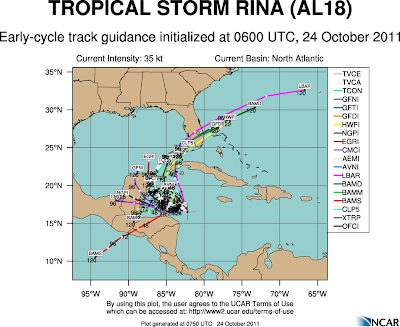 3 ensembles make it as far as landfalling in southern Florida. most of them follow the general path of the NHC's track, but it appears the time frame runs out for many of the ensembles. About 4 ensembles deviate from the group and go into Mexico, which would significantly reduce strength potentials. We can expect the ensembles to organize themselves out in the short term over the next few model runs of these ensembles. 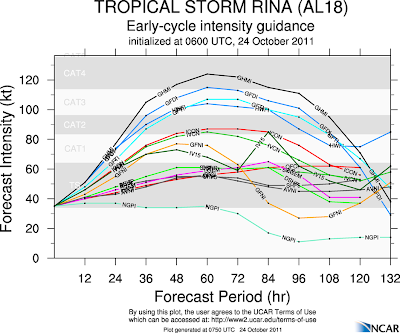 Check out the ensemble forecasts for the storm's strength. This is the more concerning image. One ensemble member even makes it to Category 4 hurricane strength! The majority keep it around Tropical Storm/Category 1 hurricane strength, but this will be something to watch closely over the coming days for a potential threat to Florida.
By Andrew at 6:44 AM No comments: