And the fact of the matter is, this is 384 hours out. So many things can and will change- it is very possible the polar vortex may weaken rather than strengthen. However, this forecast of a rebuilding has been coming back for multiple runs of the GFS, and trends are always key when looking for a forecast that has the best chance of verifying.

So keep your eyes on the models, but unless the polar vortex rebuilds at the 100 millibar level, the 1 millibar level is really nothing to write home about.

Andrew
By Andrew at 4:51 PM 3 comments: Links to this post 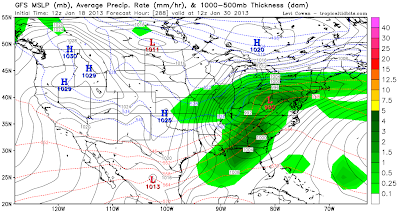 The models are hinting at the evolution of a potentially major storm system that would affect much of the central and eastern US.

Above are two forecast images from TropicalTidbits, showing the forecasted sea level pressure and precipitation in mm/hour. The top image is valid on the morning hours of January 30th, with the bottom image valid the evening of January 30th. The synopsis involves a storm system cutting along the the Midwest from the Plains and into the Ohio Valley and eventually the Northeast. Throughout this process, strengthening appears to be the key word of this system, as it eventually drops to 982 millibars off the coast of New England. If you look really closely, you can make out a blue dashed line with the number '540' on the line. This is the rain snow line; any precipitation north of the line is snow, and any precipitation south is rain. Using that as our guide, the GFS calls for possibly upwards of 1 foot of snow in parts of the Midwest, with possibly amounts nearing 10 inches in portions of the Northeast. If only this were a trustful forecast. Alas, beyond 5 days out the GFS model is biased towards making storms too strong and temperatures too cold, giving many the long range forecast of over a foot of snow, only to find rain and warmer temperatures when the forecast verifies- and that's even if the storm happens!

Either way, I will provide updates on this storm as the date draws closer, but for now, don't get too hung up on the forecast.

Andrew
By Andrew at 2:57 PM 3 comments: Links to this post

There is still potential for a storm system to impact much of the northern and northeastern US between the 24th and 26th of January- the question now is where could it go?

The above forecast shows the 12z GFS model forecast, valid for the morning of January 25th. Here, we see low pressure centered over Gary, Indiana, with another low pressure system down over the Texas/Oklahoma border. These two systems are the pieces to this puzzle, the question is could they combine into one storm system? That is another discussion not for this post. At the moment, we will focus on different model scenarios. This GFS model is on a similar track with the ECMWF model, which I will show below: 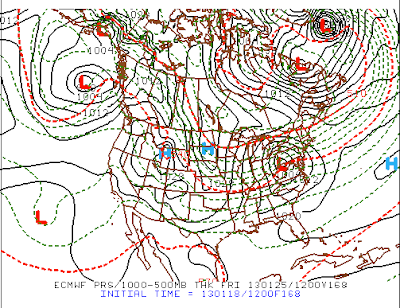 The ECMWF model, valid for the later morning hours of January 25th, has this storm system most likely affecting the central and eastern Great Lakes with accumulating snow, not to mention the following lake effect snow. Both models show the two areas of low pressure; we already mentioned the GFS low pressure areas, and can already see the main low pressure area on the Ohio/Pennsylvania border in the image above. But if you look closely, in Mississippi, you can see almost a tail-like curve in the pressure contour lines. That is the second area of low pressure. You may notice the storm systems do not line up with each other in each forecast. The reason is simple: The immediate above image (ECMWF) is valid for Hour 168, while the very top image  (GFS) is valid for Hour 162, meaning the ECMWF is slightly further to the east than the GFS.

Exciting times ahead folks- this system could deliver a swath of accumulating snow anywhere from Duluth to Chicago. Right now, the Upper Midwest and Great Lakes are in the crosshairs, but that will certainly change with time.