There is potential for a winter storm to hit the Plains during the timeframe of October 4-6. 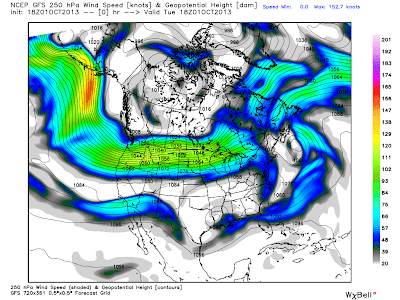 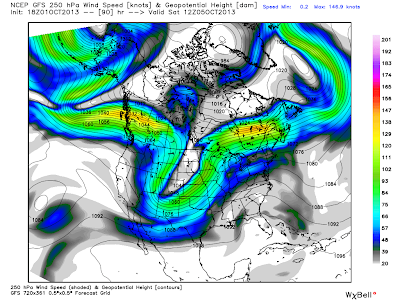 By the time the storm system enters the Central Plains, it will have bottomed out to the Rockies, as the jet stream is pictured to buckle as it carries the storm system east and eventually north. The flow out ahead of the system pictures where the storm is expected to move towards, with a northeast track most likely.

As this storm moves northeast, it now appears that a winter storm, possibly a blizzard, may hit portions of the Plains in the next 5 days. Latest model forecasts encourage a very strong system to develop, with an intense snow band to the northwest of the storm system. The GFS snowfall forecast is shown below, with the NAM forecast immediately below it.

Models tend to agree that if this is a big snow event, it will hit the Dakotas the worst. The NAM and GFS agree that amounts may approach or even surpass the one foot mark. Based on the composition of the storm system, I wouldn't be surprised to see scattered reports of amounts over 12'', with this being a very strong and well-set-up storm system. What is worth mentioning that the ECMWF model is not on board with this being a big snow producer. The latest maps I have seen have significant mountain snows in the Rockies, but nothing in the Dakotas from the ECMWF. As of right now, I'm naturally skeptical of such a big storm, but if it does happen, this would have significant implications on the winter pattern this year.

Andrew
By Andrew at 6:28 PM 6 comments: Links to this post