Okay everyone, I have pulled the trigger and upgraded the storm's title, as models and ensembles are suddenly converging on a solution favorable for heavy snow in parts of the Midwest and Great Lakes. Let's get going with a model overview.

We will start with the European ECMWF model, which will be referred to as the European model henceforth. The European model is showing a very strong storm system present in southern Indiana at Hour 240 (Day 10), with the minimum pressure just below the 990 millibar mark. This storm system would be laying down some solid snowfall in the region, as does happen with any winter storm. The big question is, why is it so strong? We will try to answer that later on, but right now I want you to look towards the Southeast US. If you look closely, you may be able to see low pressure area placed near the Carolinas that is kind of jutting out east of the main storm system. This lower pressure area could eventually slide up the East Coast and make for another big snowstorm if the atmospheric flow is right.

The American GFS model, which will now be called the American model henceforth, is also showing this storm. However, it is significantly weaker and slightly further southeast, with the center now in southeast Indiana. The central minimum pressure is immediately below 1005 millibars, which means this is a very weak storm system. As mentioned above with the European model, we again see an area of lower pressure jutting out east in South Carolina, and this again could be a coastal storm potential. I want to wait for another few days before trying to go into this second potential, because right now the forecast is focused on this Midwest aspect.

Now, it's not just one model forecast showing this storm, no matter how reputed the model is. Ensemble sets are now picking up on this storm potential as well. This image shows 850 millibar temperature forecasts as well as sea level pressure forecasts. The blue colors begin the freezing line, and all areas north of that first light blue layer are in the preferred snowfall potential region. The GFS Ensembles pictured above for Day 10 show this storm system, but it is considerably further north of the European model and American model. If you are suddenly throwing out your snowfall potential after seeing this ensemble image, please do not. This is one ensemble set, and while they can be defined as more likely to be valid, it's just one set of ensembles. There are many more, and we will keep showing them below.

Now, this is a very big set of ensembles that you really want to have on your side. This is the 850 millibar temperature forecast and mean sea level pressure forecast from the North American Ensemble Forecasting System, or NAEFS Ensembles. This system combines the Canadian and American weather agencies to bring together a set of ensembles that is known to be very reliable, at least with temperature forecasts. The NAEFS Ensemble set has the system in northwest Ohio at Hour 240. This does appear to be in line with the American Ensembles, maybe the European model as well if we were able to go further into the future, but this is as far as the European model can go. The NAEFS Ensembles would give snowfall to Michigan, probably other Midwestern cities as well. Further analysis of the NAEFS Ensembles reveals that Chicago, Milwaukee and other Midwestern cities would indeed get some snow from this event; the amounts are TBD. 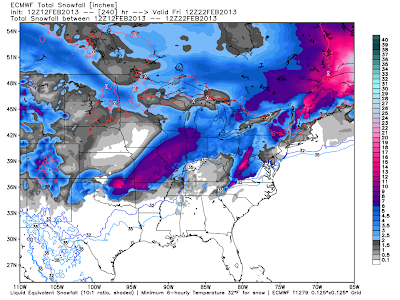 This is a forecast image of the ECMWF model's snowfall forecast to Day 10. It does not show the full snow event, because Day 10 is as far as the model goes. However, from this image alone, we can see amounts over a half foot of snow across wide swaths of the Midwest and the Plains. This is a very interesting forecast, because the model is again a very reliable model. I will be watching this model (and other models and ensembles, for that matter) very closely in coming days, because this event has been being picked up by the GFS model for several days now.

I took a look over a few atmospheric indices for this time period, and the thing I'm not liking is the potential for low pressure to become stagnant over the West Coast. If this were to happen, the storm system in question could take a track that may either go through the Gulf Coast or into the Northern Plains. Some forecasts have been suggesting this storm takes a more suppressed track down through the Gulf Coast, and this track is not out of the question. However, if this stagnant low pressure anomaly in the West US gets itself in the right place, high pressure may form in the Southeast US and push the storm in a track similar to what the European, NAEFS and other forecast systems are showing. We will get a much better picture of this event in coming days as the models come to a consensus.

For now, things are looking so-so for a storm in the Midwest, with some crucial caveats still unresolved.

Andrew
By Andrew at 5:00 PM 4 comments: Links to this post

Stormy Pattern Evolves in Next 7-14 Days

The stormy pattern we recently began with that historic Northeast snowstorm will continue in the next 7-14 days. For those wondering, I am not changing my forecast of the pattern becoming less favorable with time for snow and persistent cold.

Shown above is the 500 millibar forecast from the GFS Ensembles over the Northern Hemisphere. We see pressure contours clumped very close together in the Pacific Ocean, with low pressure anomalies in the Bering Sea and very weak/nonexistent high pressure anomalies off the coast of East Asia. These two factors will act to tighten the Pacific jet stream and really pump up storm systems that cross the northern Pacific. The persistent low pressure in the Bering Sea will shed off pieces of energy that will then crash into the Pacific Northwest region of the United States, or into southwestern Canada. Due to the already-active subtropical jet stream (another, weaker jet stream that is present in the South US, does lead to Nor'easters when storms go in that path), I anticipate the Pacific Jet Stream to drop south into the southern Plains and have the two jet streams merge in that region at least once in the next 7 to 14 days. When this merging happens, the storm itself will strengthen and we will see at least a modest chance of severe weather along the Gulf Coast, depending on where the system goes. If the subtropical jet stream captures that piece of energy, it could become a Nor'easter. If the polar jet stream catches it, the Midwest and Ohio Valley could benefit.

The forecasted Madden-Julian Oscillation (MJO) shows Phases 2-4 in the next several days, possibly into Phase 5 towards the end of this two week period. Phases 3 and 4 actually support high pressure across the eastern US, so that could diminish the chances for storms in the East US. Instead, these storms may be more provoked to go into the Plains, like they have most of the winter. However, going to back to the top image, if we see that arc of pressure contours over Greenland work out, the Midwest would benefit. You see, that arching pattern is a negative North Atlantic Oscillation (NAO), and when it's negative it enhances the chances for a high-amplitude pattern and storms for parts of the central and eastern US. If the highest pressure is based to the east of Greenland, it is an east-based negative NAO. This is more conducive for storms in the Midwest, A west-based negative NAO implies highest pressures are west of Greenland and thus favors storms in the Northeast. Based on that GFS Ensemble forecast and the Madden-Julian Oscillation forecast (along with a few other factors), I think the Midwest will get at least one fair snowstorm, but the Northeast and Plains (possibly the Midwest as well, if they're lucky) will need to watch out for lots of disturbances that could form some good snow-producers.