This is the 6:00 PM update for Tropical Storm Irene.
It's been quite a wild day for the computer models. At this stage, as Irene has become a tropical storm, that means some sense has been knocked into present and future model forecasts. At this point, it appears the entire Southeast Coast is at risk for hurricane conditions in the next 5 days. 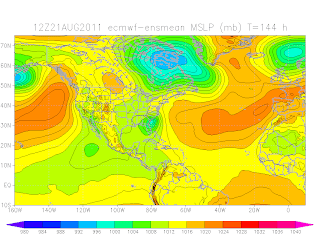 Here is the ECMWF ensemble as of the 12z run from today. It appears that the ECMWF ensembles brush the East Coast. It's still too far out to see if Irene makes landfall in the Carolinas or not, but the likelihood of that is high. 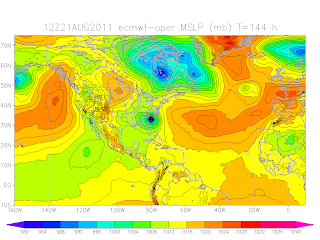 Here is the real ECMWF model run. The ECMWF goes to devastating lengths to impact the East Coast (Georgia, Carolinas). This outlines a very deadly situation should no one heed these warnings. It does appear that the ECMWF is a front runner in model reliability. While it is a far ways out, the ECMWF is a very trusted model, which means you should be on the lookout if you live in the states previously mentioned. 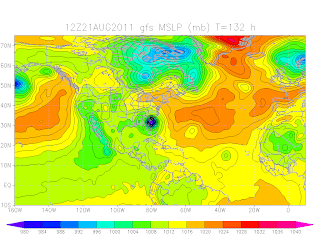 The GFS makes landfall with Irene a bit south of the ECMWF but still dangerously strong. Pressures appear to be lower in this run than in previous runs, indicating a stronger system.
We will have more on this situation in coming days.
By Andrew at 5:47 PM No comments:

Tropical Storm Irene has formed as of last night in the Caribbean area. While I was conferring with a few meteorologists, it became apparent that Irene was shifting more north, thus her track would as well. It appears her center had relocated slightly north.

The National hurricane Center is opting for a Florida landfall, while most models are either doing the same thing or going east of the NHC's track. That said, areas west of the state of Mississippi may have an incremental chance of being hit by this storm. I cannot guarantee that, but latest model guidance and my gut feeling indicate that is what should be laid down. 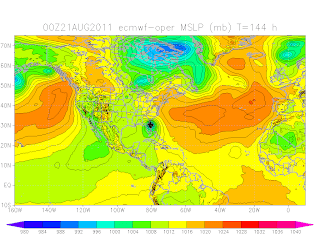 The ECMWF model takes Irene and slams her into Georgia. Now, Georgia has not had a major hurricane in a large number of years. It is possible their hurricane preparation tactics may not be implemented as skillfully as they would be with Florida residents due to lack of experience with hurricanes. I would advise residents of Georgia to have evacuation plans ready, or, if you cannot leave for some reason, stock 2 weeks of food, water and batteries for safety in a sturdy building on higher floors. The ECMWF, along with several other models, has formed a consensus which we will show you in a moment. 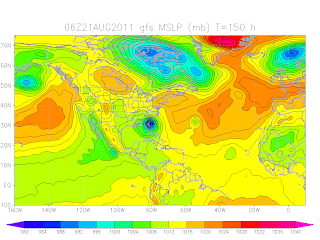 The GFS model takes Irene to a stronger level than the ECMWF, but appears to hit Florida's coastline, ride that north and then hit Georgia at the strength shown above. This could be even more devastating than what the ECMWF shows, but we are still 5 days from impact and these models will change. 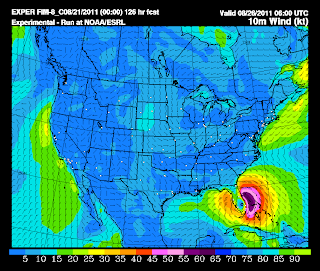 Here is the experimental FIM model developed by the Earth System Research Laboratory (ESRL). The plot mapped above is surface winds about 5 days away from now. We can see the wind strength around 65 knots. While that may seem like a lot, it is only a Category 1- Category 2 hurricane (wind may fluctuate). However, even that strength can make a big impact on any state, even one that is prepared for hurricanes.
By Andrew at 10:27 AM No comments: