Have upgraded storm title in accordance with latest model trends. 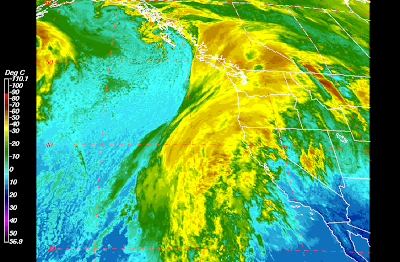 Satellite imagery indicates the storm system in question is currently still mainly offshore of the west coast of North America. The enhanced infrared values over land, however, show that this system is at least partially sampled into the upper air network. This means that weather balloons can collect data from the storm that then enhances model forecast verification chances. This is a point that I will restate in the next several minutes that you read this. 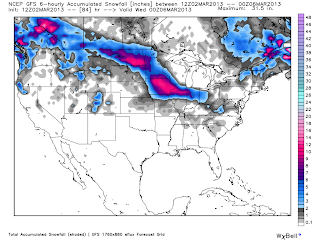 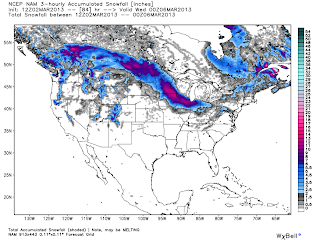 Recent observations of the latest model forecasts show that this system will be putting down some significant snowfall. The two images above show the 84 hour accumulated snowfall forecast for the GFS on top and NAM on bottom. As you can see, both models remain slightly different in placement of snowfall, and there are differences in snowfall amounts. The NAM model has more snowfall than the GFS, which is typical, since it has a wetter-than-normal bias. The GFS model and NAM model both indicate that there will be a heavy snowfall event in North Dakota, possibly into Minnesota. From there, we diverge into two different tracks. One track has heavy snow in Chicago and Milwaukee (essentially the NAM and European models), while the other track has the heaviest snow in Iowa and central Illinois (American model).

Looking at animations of recent model runs, I have seen a clear northward trend in model forecasts, more towards the first track I mentioned in the above paragraph. Because the system is just now getting onshore and into the weather balloon network, changes in the models were bound to occur. However, this last-minute shift north is interesting in more than how the system is now just getting onshore. I could see how the system maintains this north track. It will be coming into the US from the Pacific Jet Stream, which is the jet stream in the North US. As a result, it is more likely than not to be bound to the northern jet stream (essentially the northern track) than completely separating and shifting south, in my opinion. I feel like the recent models are also counting this factor in, but the big question is where the snow will fall. In that aspect, I can't say I'm too sure just yet. I will need to see another 12-24 hours of snowfall forecasts before I'm confident enough to issue an accumulation map. However, I am confident enough to say that I can make a preliminary map, which is shown above. 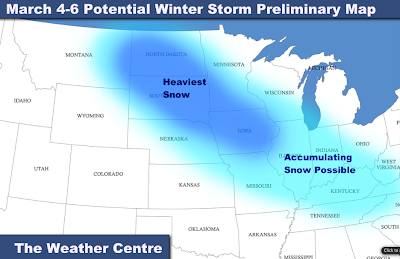 I may need to extend that 'Heaviest Snow' area further south and east with time, but I'm just not confident enough yet to bring it in that direction.