The GFS and ECMWF models are hinting at a storm system over the Midwest/Ohio Valley in the very late November time frame. The GFS believes areas within the two aforementioned regions could receive some light snow, while the ECMWF takes the low farther north into Illinois where some snow would likely be found in Wisconsin. Temperature anomalies are suggesting the potential for a major cool down in the Southeast US into the Midwest and Plains, with temperature anomalies as low as under 10 degrees below normal.
The teleconnections are less impressed by this prospect. They are offering a small chance for some snow and cold chances, particularly in or just after the November 30th timeframe. Today's 12z ECMWF has indicated that the PNA index, so stubbornly negative for a long time now, thus preventing cold and snow, may turn positive for a couple days while this storm makes its way across the Ohio Valley and Midwest. However, the ECMWF also keeps the NAO, WPO and AO indices positive, which are bad signs for snow lovers. All in all, it's up to the teleconnections. Models are very prone to have trouble in the long range, so don't take this as gospel.

On a side note, the Accuweather Updated Winter Forecast will be released December 1st. From what i've heard, some changes (possibly bad for snow lovers) are in the works. I stand firm by my forecast and believe any changes that may be made that would result in a shortened or less-harsh winter for the Midwest is incorrect.
By Andrew at 4:05 PM No comments: Links to this post

Global Warming Slowing in US

There is evidence that, in the last decade of temperature observations, global warming has been slowing in the United States.
We are not nearly joking on this matter, and we do have evidence to prove it. Below are some images from the National Climatic Data Center, or NCDC. The first image is of the average mean temperature from 2001-2011 with regional trends. 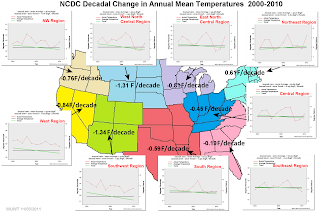 We can clearly see how much of the US has been slowing in global warming, even to the point of cooling down. The charts above the regions depict trends for a more in-depth view of how the temperatures have been sliding in the past decade.
What does all of this mean? It means that there is now solid evidence that global warming may have taken quite a hit, as this cooling indication is showing how winters are colder and summers are cooler over the last decade. If you want more images with regions, you can go to the NCDC's website.
By Andrew at 3:32 PM 2 comments: Links to this post 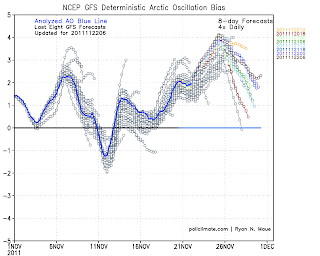 The GFS model, based on the last several runs, appears to be easing out of the likelihood of a nosediving Arctic Oscillation. If the Arctic Oscillation were to go negative, cold air would start coming to the US. However, if the pattern keeps positive, winter may be delayed yet again.
By Andrew at 6:28 AM No comments: Links to this post