Nothing much will happen over the next couple days.
Thursday will be a concern over a very small portion of the Plains for severe weather.
We will be watching the Midwest and Plains for a severe weather outbreak going into the Weekend.

I apologize for not issuing forecast discussions at all or weak ones like this.
I cannot carve out enough time.
However, moving into tomorrow, I will be putting in more effort for this forecast every night.
By Andrew at 8:00 PM No comments: Links to this post

As I have been saying for the last day or two, there is interest in yet another storm system initiating storms in the Midwest. The set-up could be all to similar to just last Sunday.
However, in this update, there are some changes.
1. Timing will be earlier in the day.
2. Temperatures will be warmer.

DEVELOPMENT OF THE STORMS 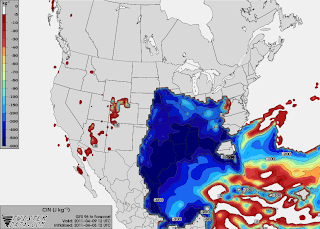 These storms will be influenced by a strong cap over the area. As a warm front lifts northward, this cap will set up, blocking any storm development until the cold front comes in and breaks the cap, initiating storms.
TIMING

The above image is an HPC map indicating positions of fronts around noon or so CDT. The warm front will be lifting more north, ushering in warmer air to the Midwest. Right on the heels of that will be a cold front, bringing another squall line threat. Again, tornadoes appear to be a potential risk.

The above is the significant tornado risk for this event. Immediately I am directed to the assumption this will be a squall line event. Anyhow, the image depicts a risk area within the Illinois region yet again. With parameters this high while this far out is concerning me. I will watch this develop.

Of greater concern is this image only 6 hours earlier, depicting a potentially devastating tornado event in the South. While tornadoes are impossible to predict at best, this is definitely raising my eyebrows. 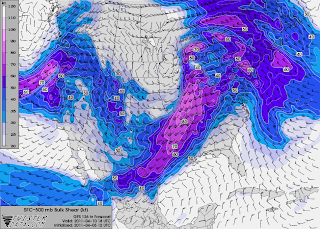 This image is of wind shear at about 500 millibars. At this level, wind shear is becoming important for tornadoes to form. Either way, the presence of such intense wind shear is a concerning factor, indicating that these storms could be accompanied by damaging winds and tornadic activity. 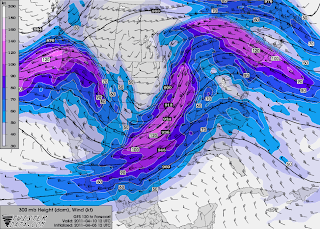 SUMMARY
This storm system definitely has potential, possibly even more than last Sunday's system.
1. The cap will be stronger.
2. Temperatures will be warmer.
3. The system as a whole will be stronger.
By Andrew at 4:57 PM No comments: Links to this post

Despite that area of 30% risk of severe weather, the SPC outlines that forcing will not be strong enough for a regional severe weather outbreak.
To get an idea of what systems will look like on that day, below is an image form the HPC.

Even though this hasn't been updated from last night, it provides a look at why the SPC issued this bulletin and risk area.
Full write up this afternoon.
By Andrew at 7:19 AM No comments: Links to this post 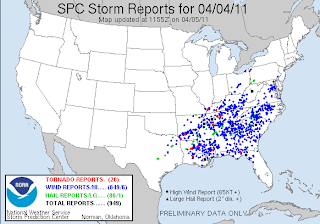 These are the reports in a rash of storms, as we can see. The worst storms were around Kentucky/Louisiana, where some potential tornadoes occurred.
By Andrew at 7:09 AM No comments: Links to this post