Tropical invest 90 has formed in the Eastern Pacific Ocean. The National Hurricane Center has gauged this invest to have a 30 percent chance of tropical cyclone development in the next 48 hours.

Discussion... Tropical convection has formed to the south of Mexico and has concentrated itself into an area of low pressure. This low pressure area has no defined circulation or extreme convection, indicating tropical cyclone development will likely occur in the 48 to 72 hour period, if development occurs at all. 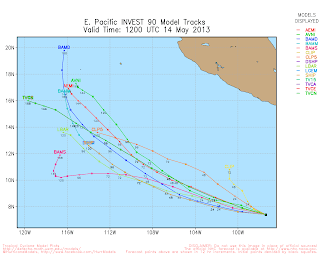 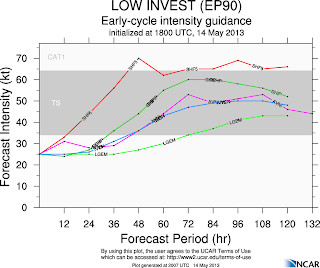 Model guidance predicts this system to move generally to the northwest over the next few days, while intensity forecasts project this cyclone to develop into a cyclone generally between the Hour 36 and Hour 72 mark. This puts us in the latter half of the workweek to see the first real chance of development.

Andrew
By Andrew at 5:53 PM No comments: Links to this post

A multi-day severe weather event may be evolving for the upcoming weekend.

Unusual model confidence leads the Weather Prediction Center to turn to the GGEM model for this afternoon's forecast preference. Due to the large difference between the ECMWF and GFS models, the idea of turning to the Canadian model looks like the safest bet at this time.

Storm system will dig into the Plains to round out the workweek, with highest vorticity values tilting to the southeast to declare the development of a negative tilt in the storm system. Increased 'digging' from this negative tilt will enhance building of the high pressure ridge over the Midwest, Great Lakes and Ohio Valley, as evidenced by the large arcing formation over the aforementioned regions. It is at this time I anticipate we will see the most prevalent severe weather. This would set the stage for a Sunday evening severe weather event. Don't get me wrong here, Saturday looks to be active as well, but what makes Sunday more worthy of discussion is how quickly the negative tilt will transition into a closed low set-up that will essentially decimate severe weather chances for those east of the Ohio Valley. As the negative tilted storm system continues digging towards the Southwest, it will eventually reach a point where it can no longer push southeast and must then swing its highest vorticity values north in a circular formation. From there, the closed low develops, and severe weather basically ends. Until then (Monday-Tuesday), however, severe weather will remain in play for the Plains and Midwest.

A few factors will play into the development of this event. We will start off seeing massive upper-level divergence of the jet stream, which will allow instability to build with relative ease. A caveat to this unstable environment will be rather consistent model projections of a stubborn capping mechanism above the surface to prevent thunderstorms from forming. The more prevalent issue will be the wide expanse and amount of moisture that will be spilled over the United States from the Gulf of Mexico. As the image above shows, forecasts predict that precipitable water values (a measure of moisture in the air) could easily surpass 1 inch in many portions of the nation. That means that if you were to compress a column of air in any given space and extract the water from that air, it would equal over an inch of solid water. In summary, amounts over 1 inch tend to make for a humid day- amounts over 1.5 inches can be just downright nasty as far as how humid it gets. 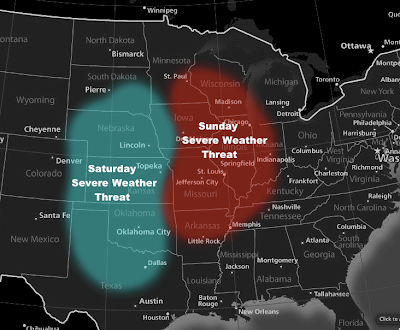 I've remade my forecast map to respect my thoughts in cooperation with the Storm Prediction Center's ideas on how this will go down. I anticipate Saturday's severe threat to target the Plains, while Sunday will be reserved for the Midwest.

Andrew
By Andrew at 4:46 PM 3 comments: Links to this post