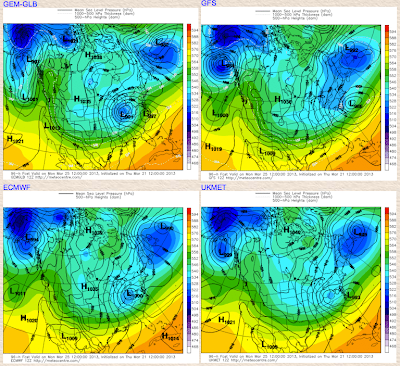 Model guidance has come into line with its first consensus for the storm. The model choice is for the storm system to drop well into the Plains before skirting to the east-northeast/northeast up the southern Midwest region and into the Ohio Valley. This track would blanket portions of Illinois, Indiana, Ohio and more Plains states out west with snow that could reach beyond one foot, especially in the Midwest. Shown above are four model guidance members, with the Canadian model in the top left, the American model in the top right, the European model in the bottom left and the United Kingdom's model in the bottom right. Due to timing issues, this is the best depiction I could get of the storm at tis timeframe, which is 96 hours away (4 days away). The colors shown are 500 millibar heights, while the mean sea level pressure values are shown in black contour lines. The Canadian and European models are sticking to a solution that has the storm in the Midwest/Ohio Valley at this timeframe, while the American and United Kingdom models favor the system being offshore by the time Hour 96 rolls around. This shows how there remains considerable uncertainty in the track even though we are only a few days away.

Notes on model guidance... Slight trend north has been observed with most recent forecasting guidance, will have to watch this as models tend to bring the storm to the north after dropping south, like we saw the models do with this storm. Model uncertainty remains too great to pick any particular forecast. 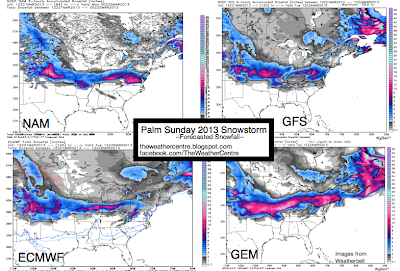 Analysis of multi-model snowfall forecasts above shows a clear consensus on where the heaviest snow should fall. Portions of Illinois, Indiana and Ohio are likely to receive the brunt of this storm system, with accumulating snow continuing out to the Plains and possibly into the Northeast. Short range American NAM model takes the storm's snowfall a bit further to the south than other model guidance, bringing snows just over 1 foot into Ohio and a portion of Indiana. Nebraska and Kansas are also hit hard. American GFS model hits the same areas with heavy snow, but is slightly weaker in Illinois and Indiana. European model blows up the snow in IL/IN/OH, with formidable snows back out to the west. Canadian model is in its own world, I have no desire to take its solution seriously.

Current thoughts are shown above, with a wide stripe of accumulating snow potential from Kansas and Nebraska (even though NE is not marked, it is in the stripe) into the southern Midwest and Ohio Valley, continuing through the Northeast. I am feeling confident of NE/KS/MO getting in on an accumulating snow event, however confidence drops when we reach the Midwest and Ohio Valley. The storm track is not set in stone just yet, and we could very well see a shift further north in the next 24 hours. I did put the Northeast in this graphic in the chance that some snow does hit that area. Again, even though model forecasts aren't too supportive, there is lots of time for change. I will put in amounts when models clear up further, probably in tomorrow afternoon's update.