I believe that a tropical system currently entering the Caribbean (Invest 97) will eventually threaten the United States, specifically the Gulf of Mexico in the coming 7-14 days. There is potential for this invest to become a hurricane prior to landfall.

We'll start with a look at satellite imagery over the Caribbean. On the right side of the image, we see Invest 97. It looks rather ragged right now, less impressive than it was earlier today. An animation of the Caribbean does show convection has dropped off with the onset of evening and nighttime, and considering how other storms in this region have been, this dissipation is not much of a surprise. I would not be shocked to see a flare in convection not only overnight, but into the early morning hours. If we go 12 hours from now without seeing a surge of convection re-igniting this invest, the system may have to be watched for significant weakening. But that's all in the event we see the system stay quiet overnight.

Intensity and track forecasts concerning Invest 97 show the general consensus to be having the system shift northwest and move through Cuba before re-emerging and possibly threatening or scraping Florida. Intensity forecasts project little change in strength over the next 24 hours before a sharp increase in strength by the 2-3 day forecast period. Some models get really rambunctious and take the system to Category 2 or even Category 3 strength, but there are reasons why I doubt this whole set-up in general.

Take a look at the current steering winds over the Atlantic. This chart shows you the current flow of the atmosphere, specifically relating to storm systems above the 1000mb strength mark. Invest 97 is shown as the yellows and oranges just west of St. Lucia, St. Kitts and the string of islands that are the doorway to the Caribbean. The streamlines ahead of Invest 97 would have the system moving almost southwest per the current trend. This would go against model projections of a northwest movement in coming days. My thinking is the models prefer to have Invest 97 get caught up in the circulation of the abomination east of Florida. However, it is clear that Invest 97 is entangled in the flow pattern favoring a more southwest movement. 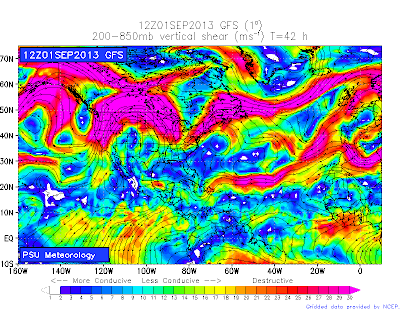 For all intents and purposes, let's say Invest 97 stays on course with my thoughts and does move southwest in accordance with the atmospheric flow. The question then becomes, how likely is the invest to develop further? Well, in order to find that out, we need to check out shearing over the Caribbean. The GFS forecast for 850-200mb shear by hour 42 shows a favorable to 'OK' environment for tropical cyclone development in the Caribbean. Assuming the invest is now either southeast of or south of Hispaniola by hour 42, we look at shearing values for that area and find a neutral environment. It is not the most favorable environment for additional development, but it is also not the worst. I would not be surprised to see significant development of Invest 97 being put on hold for a little while longer due to this shear, but beyond the Hour 60 mark, shearing should diminish and actually become quite favorable for further development. 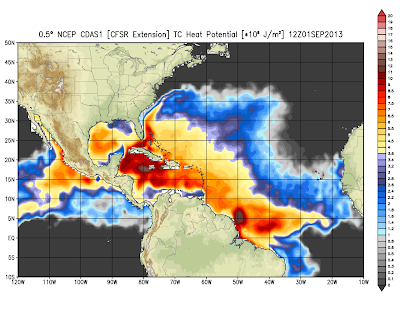 Now that we've worked out the invest should end up in a rather favorable environment for development per shear forecasts, let's see just how ready the Atlantic waters are for tropical development. An analysis of TC Heat Potential from WeatherBell literally rolls out the red carpet through the Caribbean into the Gulf of Mexico. Those darker oranges and reds you see across the Caribbean indicate very favorable water conditions for tropical cyclone formation and development. That said, if we see the invest take the southwestern path (which I do think it will), and after it deals with some moderate wind shear, the invest may be ready to play ball and get itself going across the central and western Caribbean. From there, the question becomes: is it bound for the Gulf of Mexico?

Well, it's a little too far out to tell for certain, but the GFDL ensembles are following the idea I discussed above, and they tell what could be a very true story:

The GFDL ensembles show, with the exception of one or two members, a very strong consensus of a Gulf-bound hurricane, possibly on the magnitude of Category 2 to even major hurricane Category 3 status. Now, the GFDL ensemble set shows pretty much what I'm thinking. I'm not sold on the strength of the system, because all models are notorious for incorrectly forecasting a storm's strength. However, I am open to the idea of a hurricane developing with the strength shown by the GFDL ensembles in the image above for the reasons I described above: low shear and favorable ocean heat content. If you're going to trust one forecasting set with this system, trust the GFDL ensembles. I have a feeling they'll be right.