-No new information to add, still holding to my forecast graphic. Chicago's totals continue to be the most controversial, will hold my amounts there as models are in shaky agreement.

Post title removed the 'High Impact' just because it was getting too long to write and the high impact snows (well above one foot) are looking less synoptic (large scale) and more mesoscale (localized).

Latest 500 millibar analysis shows that our storm system is beginning to work its way onshore of the US. Recent model runs have had the privilege of getting weather balloons into the system, so the model data is more reliable as it ingests data from the storm. These weather balloons could not get into the storm earlier, as the system was over the Pacific. Nonetheless, now that the storm is beginning to shift onshore, weather model data is becoming more and more reliable with each step the system makes to move fully onto land. 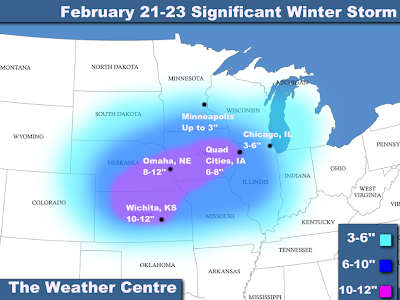 I decided to add in choice cities to my forecast graphic today, so those of you in the crosshairs will be able to get a better look at what snow amounts you may receive. Wichita, KS into Omaha, NE are definitely looking like the big winners with this storm, where amounts will likely flirt with (and even surpass) one foot of snow. Localized areas in central Kansas to the west of Wichita could see amounts trying to reach above 18 inches, but the spectrum of that potential remains to be determined. The Quad Cities are on the border of the 6-10 inch line. I decided to go conservative in that area, as the Quad Cities eastward are going to be the tricky spots as far as how snow accumulation will work out. The Quad Cities into Chicago will be ground zero for hair-pulling, as forecasters will be dealing with how to forecast snowfall amounts after storm has begun to weaken.

One city I want to highlight in particular is Chicago. I have been surfing multiple weather forums and have seen local forecasters with amounts past a half foot. I even read one testimonial about a government official (not the big Washington politics guys, we're talking government meteorologists) saying this city would receive over a half foot of snow. However, other nationally-forecasting models show lighter amounts. Due to known bias' with these local models, I have decided to go for the conservative 3-6 inches, with 6 inches being the high end if the local models end up right. Then again, if they do, both the Windy City and Quad Cities will have to be bumped up.

Andrew
By Andrew at 5:57 PM 5 comments: Links to this post