The winter of 2012-2013 is most likely going to start off on the slow side before we get into a pretty active period to finish off the winter. Let's get into why I believe this will happen. 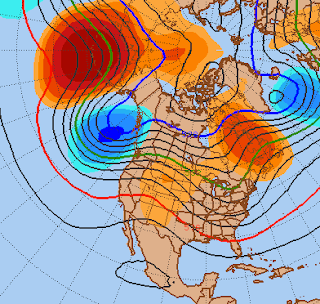 A big reason for this likelihood is something called the Rossby Wave. A Rossby wave is a storm system that emerges from the North Pole and moves to the southwest, something not usually seen in the Northern Hemisphere. The Rossby wave can be an event, where several of these storms will form and reform over the same area, typically setting up a pattern that can last for a good 4-6 weeks at a time. Unfortunately, this Rossby wave pattern has set up over the northeast Pacific, which has led to a stormy West US, and, consequently, a warm and dry East US. That is not something we want to see heading into the opening weeks of winter.

If I extrapolate (use observations to forecast the future) this Rossby wave pattern, this bad pattern in the East will end in the first couple weeks of December, as the pattern shuts down and moves on elsewhere. I am thinking that the shut down of this pattern will happen from early December to mid December, with the latest shut down date being the week before Christmas.

(This data was originally published on November 9) Observed snow cover in Siberia during the month of October is also supporting the idea of a back-loaded winter, something many winter weather lovers out there are dreading.

Something forecasters use in the fall months to help predict the upcoming winter is indeed Siberia. In October, the anomaly of snow cover over the region has been proven to correlate with observed Arctic Oscillation anomalies in the following winter. For example, if the month of October held a very below normal snow cover situation for Siberia, the Arctic Oscillation (AO) would most likely be on the positive side (warmer weather) for the winter.

If we apply this rule to the upcoming winter, I would expect a fairly warm November and most of December before some moderation in the AO occurs. This moderation from mostly positive would most likely happen around the Christmas timeframe. From there, the first week or two of January would hold continued moderation in the AO (not too positive, not too negative). However, later on in January and in February, Siberia is encouraging the idea of a strongly negative Arctic Oscillation. If this were to verify, we could see extreme cold in much of the nation- something that winter-season farmers may not want to see. 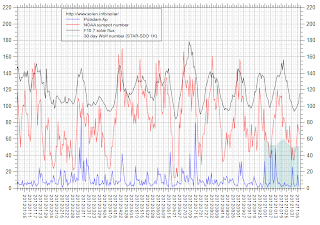 Solar activity will also play a role in this winter. A negative correlation has been found in geomagnetic activity (as shown above) and the Pacific North American index (PNA). A negative correlation means that when Factor 'A' goes up, Factor 'B' will go down. In this case, when geomagnetic activity goes up, the PNA index tends to go more negative, and we are already seeing this and will continue to see this in coming weeks.

Extrapolating previous ups and downs of the observed geomagnetic activity values in the chart above, the PNA should be the most negative in coming weeks before pushing towards positive territory by the beginning of December. The PNA should enter the positive phase by the first week or two of December, fitting in with what I have shown with Siberia and the Rossby waves.

In conclusion:
•November, much of December will be slow for snow.
•Plains, Rockies are snow hotspots for this period.
•Gradual change in last 2 weeks of December.
•January starts off modest, ends active and cold.
•February brings brutal cold, snow to the East US.

Credit on the PNA/geomagnetic piece goes to blizzardof96 on the Accuweather Forums (see entire post here)
By Andrew at 11:30 AM 15 comments: Links to this post