It's looking like we're going to see a storm around the February 4-6 period, which could very well be significant.

Shown above is the 500mb anomaly forecast off the ECMWF model, valid on the morning of January 26th. If you've followed this blog for a while, you know that we can use that area of negative height anomalies over Japan to forecast a storm in the United States. As Joe Renken states, we can extrapolate a storm over East Asia out 6-10 days to arrive at the timeframe for a storm here in the United States. Going that length past January 26th gives us a storm timeframe of February 1-5. That's not the only thing we can take away from this predictor, however. Looping the ECMWF forecast tells me that the storm system will be moving essentially due east as it passes through central Japan. This tells me that we could (keyword here is could) see our February 1-5 storm system also moving on a west-to-east track, not really curving north or dropping south too much. The 12z and 18z GFS models caught on to that idea of a west-to-east storm, but had the storm hitting the US on January 31st to February 1st, which is just outside the timeframe presented here. We'll discuss the models a bit later on in this post.

Adding to the evidence of a possible storm in the early February timeframe is what we saw happen in the Bering Sea on January 18th. The image above shows contoured 500mb height anomalies over the north Pacific on January 18th. We see a storm system moving east from far northeast Russia, which is the westernmost 'X' on the image above. The next day, we saw the storm move nearly due east to the second 'X' in the image, only moving just a bit north in the process. Going back to that link I posted above, there is also something called the Bering Sea Rule, developed by Joe Renken. The Bering Sea Rule states that a storm in the Bering Sea can result in a storm over the United States 17-21 days later. If we extrapolate the January 16th date out using the 17-21 day timeframe, we arrive at a potential storm in the February 2-6 timeframe. This fits well in the February 1-5 timeframe we got from the East Asian correlation, and the nearly west-to-east movement in the Bering Sea tells us the storm in the US may be west-to-east as well, like we saw in the ECMWF forecast. (End copied portion)

The East Asian correlation and the Bering Sea Rule aren't the only things rooting for this storm- the Lezak Recurring Cycle is also in on this storm potential.

The Lezak Recurring Cycle, or LRC, is a tool developed by meteorologist Gary Lezak that, in essence, can enable forecasters to predict the overall weather pattern months in advance. The gist of the LRC involves a cycling weather pattern that develops in October and November of each year; no pattern is the same from year to year. Around mid November, the LRC begins to repeat, meaning we start to see a similar weather pattern in mid November that we saw in early October. This means that the cycling pattern has begun, and it will continue to cycle on a regular (non-changing) 40-60 day interval for the next ~10 months before it dissipates over the following summer.

This season's LRC cycle is on a 57 day cycle length, meaning the weather we saw in December can be expected to "come back" as we enter February. The image above shows the surface condition map on the left and 500mb map on the right from December 14, 2013. If w extrapolate that date out 57 days, we come to the February 7th mark. To make up for natural shifts that occur in the weather pattern, we can reasonably stretch the timeframe out to February 6-8 if we want to. In this case, it wouldn't be the strangest thing for this system to bend the cycle length a bit to fit in with the East Asian + Bering Sea correlations, and I feel that they will be working in sync on this particular storm threat. As the 500mb map above shows, we have high pressure over the West Coast, with only slight ridging in the Southeast and the storm system easily working its way across the Plains. Based on the pattern I'm seeing to start February, I'm thinking a storm track similar to the one this system took in mid-December could very well be in the cards.

Now that we've got the trio of long range predictors backing this storm potential, confidence is rather high on the idea of a storm system happening around February 4-6. Now, we can start to outline a possible track.

We'll begin by taking a look at the predicted Pacific-North American (PNA) index. We see on the top panel that ensemble members from the Climate Prediction Center want the PNA to plummet as we head into February. By the time this potential storm system comes around, the Pacific-North American index looks to be well into its negative territory.

The pattern in a negative PNA state is shown above, and we can see how cold and stormy weather invades the West US as a result of persistent high pressure in the Gulf of Alaska. This stormy West then allows high pressure to form in the East, essentially cutting off any chances of a Nor'easter. What the -PNA does allow is the Great Lakes Cutter type storm, where a storm system begins in the Plains and 'cuts' north towards the Great Lakes, laying down potentially significant snowfall in its wake. It's very possible we see somewhat of a cutter storm here- the long range predictor East Asian correlation and Bering Sea Rule argue for a more west-to-east track, which does look like the preferred track at this point, but models may want to shoot the storm north when it hits the Ohio Valley, which also is in the realm of possibility.

There's a key model bias that has been (and will continue to) impacting model forecasts for this storm. The model bias references a negative height bias, which is shown when a storm system enters the Plains. In those cases, model guidance lowers heights in the East US too much, leading to a storm track too far to the south. In reality, high pressure systems in the East should be stronger than what they are projected to be on model guidance, leading to a more northern storm track. This system fits the bill for that bias; for the full explanation from the NWS office in Louisville, you can read below:


The model has a slight cold (heights too low) bias, especially for about the eastern third of the country, with respect to the prediction of mid/upper tropospheric geopotential heights and resultant thickness calculations. Often the MRF will dig troughs in the height field too far south across the Great Lakes and Northeast regions, most noticeably after about Day 3. During the cold season (mainly October-April), the MRF will depress the storm track too far south across the Plains states as a response to this cold bias. Forecasters across especially the Northern Plains/Upper Mississippi Valley areas need to be aware of this characteristic and be careful predicting, for example, snowstorms to "go to their south".

How have we already seen this model bias? Take a look at this side-by-side forecast from the 0z GFS model on the left, and the 12z GFS on the right, both forecasting 500mb vorticity values for the morning of February 4th, when the storm is just beginning.

If we look at the 0z GFS on the left, we see the storm system on February 4th is digging into the Plains, but the high pressure in the East US, shown as the arch-like contour lines, isn't strong enough to push the storm system north. This lets the storm system stay to the south and dump snow on the midsection of the US. However, in the 12z GFS, we see what looks like a correction of that height bias we mentioned earlier, as the heights are noticeably higher in the East. This allows the storm to push north and dump snow across the northern US, including the Plains, Midwest, Great Lakes and parts of New England. The negative PNA (whose forecast went even more negative today when compared to yesterday) raises an immediate red flag to the forecasts that want the storm to stay further to the south. The increasing strength of the -PNA projections only highlight that red flag. There are indeed items that could make this storm take the southern track, but I find it more reasonable right now to take that northern track. 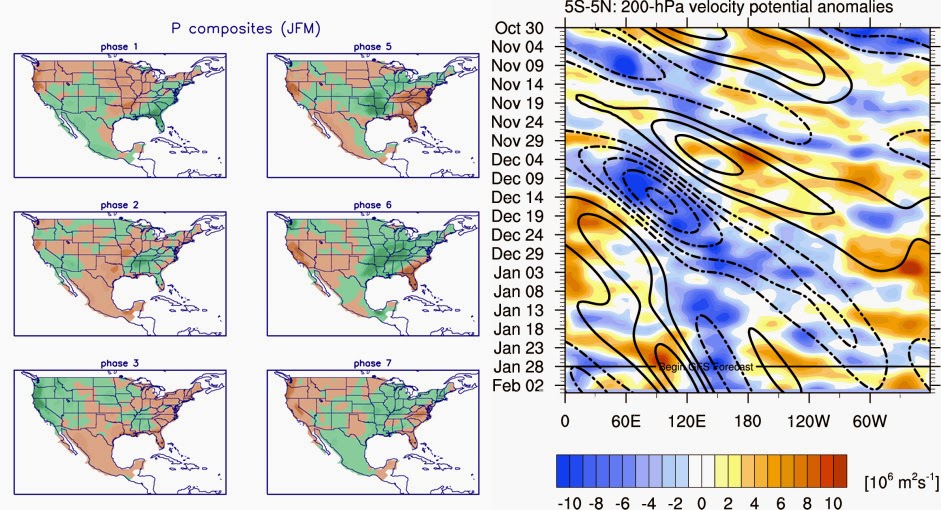 Another item rooting for this northern storm track is the Madden-Julian Oscillation. The Madden-Julian Oscillation, also known as the MJO, involves the placement of enhanced or suppressed tropical convection year-long. The image on the left shows precipitation anomalies for Phases 1, 2, 3, 5, 6 and 7 for January, February and March. Phases 4 and 8 were left off, as they are not needed in this post. The forecast on the right shows 200mb velocity potential anomalies forecasted by the GFS. We see blues (dashed lines) highlighting active tropical convection, thus an active MJO phase, while oranges and solid lines indicate the lack of tropical convection. We see that there is a swath of blues covered by a dashed line oval at the bottom of the image, near the 180 longitude line. The MJO is predicted to be just west of that line, and if you are to look at the outgoing longwave radiation (OLR) composite for December-January-February MJO phases, you would find that Phases 6 and 7 are defined by enhanced tropical convection (blue colors on the right panel) being placed on or just west of the 180 degree longitude line. Taking a look at Phases 6 and 7 on the precipitation composite on the left tells us the MJO favors a storm track through the Midwest, Great Lakes and Ohio Valley. This would enhance the chances of that northern storm track working out instead of the southern storm track for this storm system.

Lastly, here are a few snowfall forecasts from different models to show what the snowfall track (NOT necessarily the snowfall amounts) may be like if this northern track works out.