A rare fungal infection by the name of mucormycosis has been discovered in some victims of the deadly Joplin, MO tornado.
So far, three people have died from this infection. All three victims had:

-Serious Injuries
-Some form of fungus.

One person who died was confirmed to have mucormycosis, but the other two have yet to be determined.
Eight people have contracted the fungus. All of the eight people had:

This form of the infection is a case which occurs with the piercing or damage of soft tissue. For example, any object with a spore on it can pierce the skin. The spore becomes lodged inside.
Over the course of a few weeks, the infection sustains itself and progresses, to the point where immediate medical attention is required.
If you have any of the following symptoms, seek immediate medical attention.

-Wounds that are not healing
-A discoloration (which could be something other than this fungus)
By Andrew at 11:04 PM No comments: Links to this post

By Andrew at 6:34 PM No comments: Links to this post

Hurricane Adrian is a major Category 4 hurricane. Maximum sustained winds reach 140 mph, with central pressure at 946 millibars. Adrian is moving to the WNW at 9 mph.
Adrian is forecast to remain in major hurricane strength (Category 3 or higher) until about 10 am CDT Saturday. From then on, Adrian will become a Category 1 or 2 hurricane until 10 pm CDT Sunday, when it weakens to a tropical storm. At 10 pm CDT Monday, Adrian becomes a tropical depression, and then an extratropical depression 24 hours later. 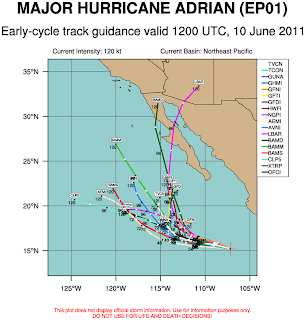 The NHC and these ensembles are on the ball about this hurricane's track. The big consensus remains to have the storm move parallel to land, which is also the NHC's solution. 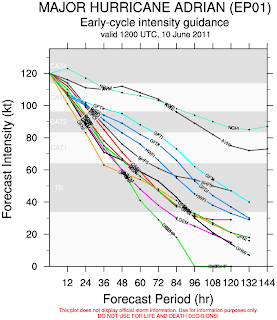 Adrian defied these ensembles majorly by becoming a Category 3 then Category 4 hurricane when no one else thought it would. That said, I have lost some confidence in these ensembles. At this moment, I believe that the pink line on the above ensemble chart is the best bet for going along with the NHC's forecast.

There is unfortunately no infrared satellite image available at this time.

Adrian is now mostly forecast to weaken- first gradually, but then rapidly into an extratropical depression by 5 days from now.
By Andrew at 9:05 AM No comments: Links to this post