Positive QBO May Not Survive into Winter

The positive QBO we have seen evolve in the past few months appears unlikely to survive into this winter.

The graph above shows the evolution of the Quasi-Biennial Oscillation (QBO) over the past few years, up until the present day. The QBO involves a wind pattern in the stratosphere- in positive QBO winters, the polar vortex is strengthened, and opportunities for cold weather in North America are lowered. In a negative QBO, the wind pattern opposes the polar vortex, leading to additional chances for colder weather. We see more bouts of negative pulses than positive ones on this graph, and the positive QBO waves that do come about are not nearly as strong as the negative pulses. Looking to the far right side of the image, we see a new positive QBO pulse has evolved in recent months. Looking at the far, far right part of the image, we see that the positive QBO has been weakening recently. Could this be a sign that the +QBO pulse is weakening? Will it survive the winter? The first question is a yes (at the moment), while the second question could be a no.

I managed to string together several other atmospheric factors that can help determine the future of this +QBO wave. The first one involves a rather complicated pattern known as the AAM.

This image shows the observed AAM values from August 2012 to the present day. If you look closely, you can see that the AAM trend matches up with the QBO trend. We see negative AAM values from August to roughly November; a quick look at the QBO chart shows negative values were present at that time. Towards the winter months of 2012-2013, we see a definitive positive trend in the AAM, and this occurs around the time the QBO begins its ascent to neutral, and eventually positive territory. Now, with two big negative dips in June and July on the AAM chart, we are starting to see the QBO decrease. Is this correlation a coincidence, or an actual correlation between the two? It's an actual correlation- There is a positive correlation on the order of 0.391 between the AAM and QBO. This means that whatever the AAM does, the QBO tends to do as well, as we showed in this analysis of the two charts. The QBO's trends are also reflected onto the AAM. A value of 0.391 is pretty substantial, compared to other correlations I have seen in different atmospheric patterns, so this should be closely watched.

There's an even more significant correlation that is aiding in the positive QBO dwindling down, and the atmospheric pattern causing this new correlation is the Southern Oscillation Index, or SOI.

This screenshot displays the average SOI values over the past 30 and 90 days- the third box is something we will not discuss here. In the last 30 days, the SOI has averaged out to 8.9, and the last 90 days have brought the SOI to a 7.6 value. A look at any possible correlation between the SOI and QBO reveals a significant negative correlation of -0.521. This negative correlation means that whatever the SOI does, the QBO tends to do the opposite- in this case, the presence of positive SOI anomalies could very well be helping along the weakening of this positive QBO pulse. As I said in the previous correlation, 0.391 is a pretty noticeable correlation; -0.521 is an even bigger correlation, and one that, in my opinion, ought to be driving this fading +QBO pulse. If we want to see the +QBO weaken (which would be good for cold prospects (a negative QBO would be great for cold weather)), I would want to see the positive SOI strengthen to double digits for a prolonged period of time- that would seriously hurt the +QBO pulse.

Our last correlation is not nearly as significant as the previous two, but is another factor assisting in the weakening of the current +QBO phase.

This screenshot shows sea surface temperatures (SST's) in the Nino 1+2 region from now all the way back to August 2012. If you recall, the Nino 1+2 region is located in the waters immediately offshore of western Ecuador. Recently, we have seen very strong below normal SST anomalies in this region, and I decided to see if there was a match between the Nino 1+2 temperatures and the QBO phase. There is a positive correlation of 0.144 between the two. Again, it is not nearly as significant as the other two. However, as the Nino 1+2 region has been so anomalously below normal recently, there must be at least a slight helping by this factor to help weaken the +QBO.

If these correlations work out, the AAM continues to go negative and the SOI strengthens in its positive phase, the chances of the QBO at least weakening further are rather high.

Andrew
By Andrew at 6:11 PM 5 comments: Links to this post

Tropical Storm Dorian has increased the threat of making a landfall on the United States overnight, as computer models suppress the storm to the south in an effort that could draw the system into the Gulf of Mexico.

Latest model guidance has a fairly straightforward solution this morning. TS Dorian is favored to continue on a west-northwest path, staying just north of the Caribbean in coming days. As it approaches the waters north of Cuba, some models start to curve the system northward in the beginning stages of what would have Dorian make a u-turn and move back out to sea. However, as many GFS Ensemble members are showing now, some other models hold off on this u-turn plan and continue on a WNW path. This is a new development, and one we need to discuss.

This is the current atmospheric flow chart for TS Dorian. The system is seen just below that big anticyclone of white circles as a small red area in the bottom right corner of the image. If we follow the white lines in and around TS Dorian, we see a WNW track is indeed favored over the next couple of days, as the massive anticyclone to Dorian's north suppresses the system and pushes it along. 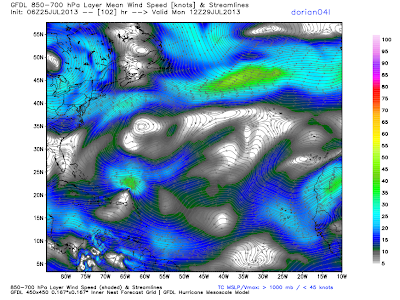 This is where things get interesting. On the GFDL model's forecast for the same atmospheric flow level in the image above (valid for July 29), we see Dorian ENE of Cuba, shown as a green and blue swath in this image. But look where the arrows directly west of the green area are pointing: west. Some arrows on the northern fringes of Dorian are going for that u-turn pattern, but the arrows (streamlines) in the center of Dorian are the most influential on its path, and call for a continued WNW movement. If we were to go into the future another 24 hours, we would see that this westward trend continues, and Dorian would be headed for not only Florida, but possibly the Gulf of Mexico.

This all depends on just how the major anticyclone in the second image operates. This continued WNW path would depend on if more anticyclones are able to suppress the storm into taking a Florida or Gulf-bound route, as the above forecast is currently showing. 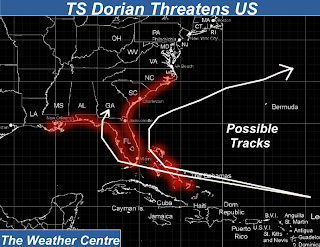 The two most prevalent tracks I see involve the U-turn idea, where Dorian would curve north and out to sea before hitting Florida, although greatly impacting the Bahamas, and a track where Florida is hit, but not by a direct landfall. Landfall then occurs on any land from Mississippi to the Florida Panhandle, as a u-turn curve pattern takes place. Regardless of the track, the Bahamas will experience tropical activity if the latest forecasts hold up (which I think they will).

Andrew
By Andrew at 9:39 AM No comments: Links to this post