This post is an update on the current outlook for the winter of 2013-2014, and will address why preliminary indications show that the Plains and Midwest may be frontrunners for a harsh winter this year.

Before we get into the discussion, I want to lay out the Lezak Recurring Cycle, which will be used in today's post. The Lezak Recurring Cycle, or LRC, is a tool developed by meteorologist Gary Lezak that, in essence, can enable forecasters to predict the overall weather pattern months in advance. The gist of the LRC involves a cycling weather pattern that develops in October and November of each year; no pattern is the same from year to year. Around mid November, the LRC begins to repeat, meaning we start to see a similar weather pattern in mid November that we saw in early October. This means that the cycling pattern has begun, and it will continue to cycle on a 40-60 day interval for the next ~10 months before it dissipates over the following summer. Now that we are in October, it is time to start looking for atmospheric phenomena that may factor into the LRC this year. Using the LRC, and long range model guidance, some early returns on who may get hit hard this winter are surfacing.

The first item to address is the October 4-6 winter storm, which delivered close to 5 feet of snow in a few isolated spots across western South Dakota. This storm system trekked northeast after strengthening over the Plains and dumping all of its snow. In the wake of this storm, a cold front meandered south through the southern Plains, Midwest and the Eastern US. Just on a very preliminary look at the winter storm, and the environment surrounding it, I would not be surprised to see this storm stay in the Plains and Midwest through the next couple of LRC cycles through this winter. To show why, take a look at the 500mb map for October 5th:

You can see the storm system in the Plains as a closed low, signified by the closed contour lines. There's a reason it went northeast rather than east- there was a ridge of high pressure in the Southeast. This ridge means it really can't just dive south or go due east unless the ridge moved, and in this case, it didn't. That said, considering the LRC should maintain a similar atmospheric pattern through its winter and spring cycles in the upcoming year, the storm system should go northeast again when it re-cycles in mid-November. I don't see this storm system being one that will become a big snow producer for the East, given the position of the ridge in the Southeast, but I would also be surprised to see extreme snowfall amounts like the ones seen in early October from this storm. Depending on how the jet stream changes from now until the next cycle in mid-November, the storm track may change slightly, but the overall pattern should remain similar enough to keep the storm track at least relatively on the same track as we saw in early October. With another storm system about to move into the Plains again, this region is looking at multiple snow and cold chances this winter, even though we're only ~25% into the LRC.

Let's take a look at what the models are predicting for the next week or two.

This image shows the European ensemble forecast (left) and the American ensemble forecast (right) for October 19, predicting 500mb height anomalies across the Northern Hemisphere. The grand idea here is that the weather pattern will be experiencing a drastic change in the medium-range. Both ensemble projections agree that a strong ridge will set up across Alaska and western Canada, and it may be strong enough to incite a cross-polar flow, which would enable cold air to be transported from Siberia to North America. Regardless of if this cross-polar flow does set up, significant negative height anomalies will form in the Central and East US as a result of this intense ridging in the western part of North America and ridging in Greenland (a +PNA signal and -NAO signal, respectively). A ridging pattern will be maintained to varying strengths in the Southeast US, which should keep the strongest cold weather in the Plains/Midwest and Great Lakes, hence why these regions are outlined for frontrunners for a harsh winter; the cold will be stronger when the LRC brings this cold pattern back in a couple of cycles for January. These negative height anomalies in the Central and East US will be enhanced by a recurving typhoon in the west Pacific named Wipha:

The American ensembles take this pattern further, maintaining it into the 2-week range: 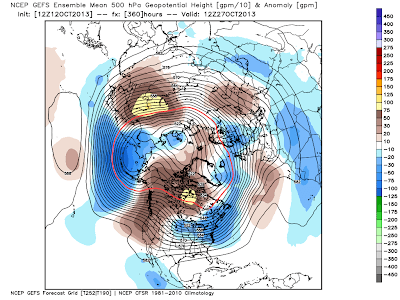 The American ensembles continue to maintain ridging across western North America, aided by deepening negative height anomalies spreading south from the Bering Sea. Thanks to the continued ridging in western North America, persistent negative height anomalies are maintained in the Central and Eastern US. I'm a little skeptical of the negative height anomalies being shifted so far east, opposed to being in the Plains and Midwest, as ridging in the Southeast should still be present in this timeframe and the negative NAO pattern (ridging in Greenland; favorable for a chilly Northeast US) will have either weakened or dissipated by this time per the ensemble projections. On the other hand, a typhoon crashing into East Asia in the next 3 to 4 days (as shown below) should lead to a continued troughing Central/East US pattern beyond the next 10 days, enhancing the argument by the GFS ensembles.

The weekly CFS model maintains a positive PNA pattern until the beginning of November, and if this verifies, the Midwest and Plains would continue to be frontrunners for a harsh winter this winter.