I'm seeing the potential for a significant storm system in the March 12-17 period. 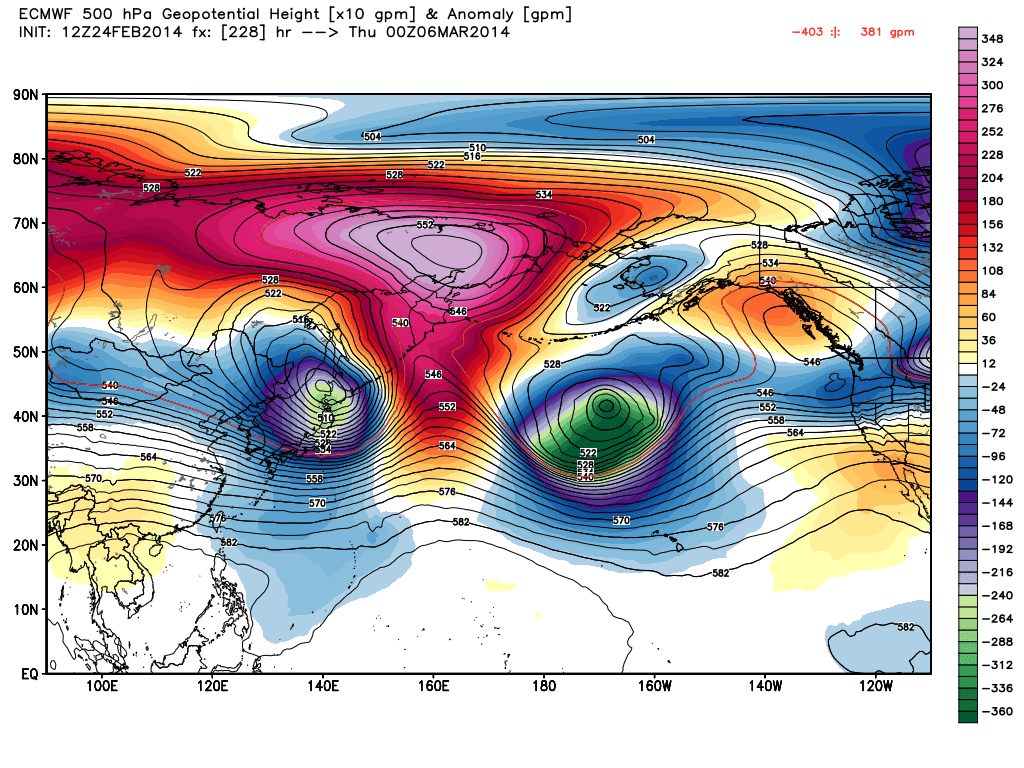 Shown above is an ECMWF forecast for the evening of March 5th, depicting 500mb height anomalies over the North Pacific. If we look on the left half of the image, we see a deep trough over Japan, one with strength we haven't seen in some time.If we use the 6-10 day correlation, explained by Joe Renken, to tell us when these two systems may 're-appear' in the US, we find ourselves at a March 12-16 potentially significant storm. If this solution were to verify, we could see the strength of the trough translate over to that March 12-16 storm as well. This could mean a significant storm system, potentially accompanied by significant cold weather. It's too far out to tell if this could be a big snow maker, but judging on how the climate is shaping up for mid-March, I would certainly keep an eye out for some snowy impacts. 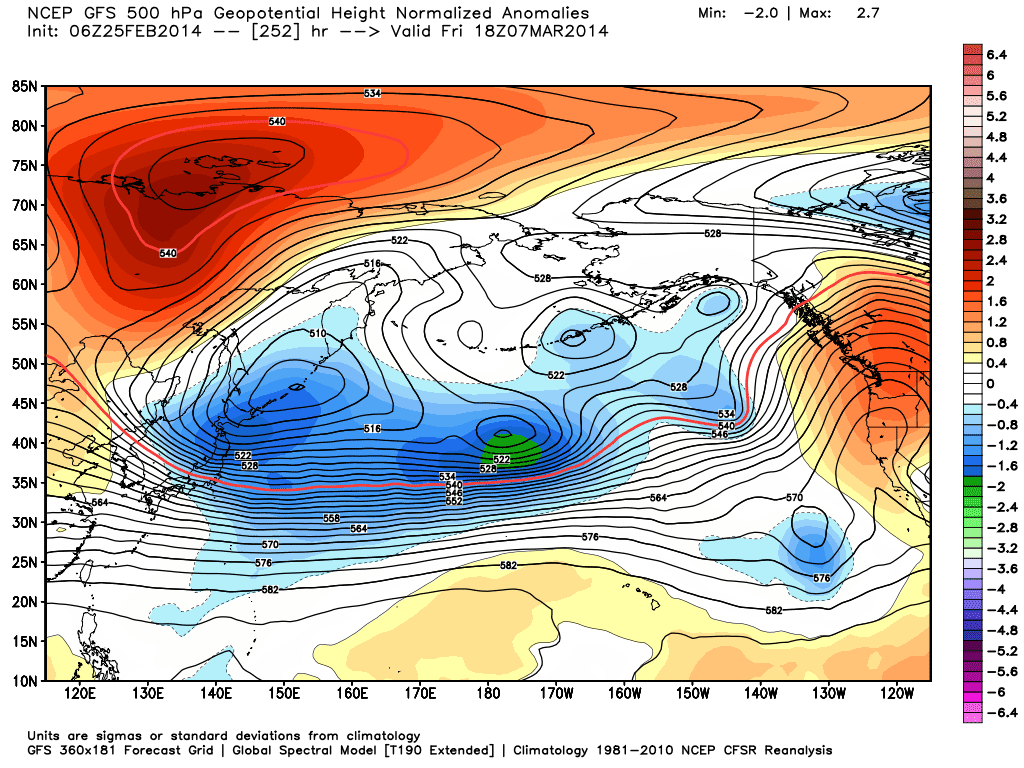 The GFS model shifts the timeframe a little further down the road to the afternoon of March 7th, but agrees on the idea of a strong storm system over Japan. Again, it'll take a while before we get into details, but it's clear that there is a chance for a significant storm system over the March 12-17 period. I'll have more details on potential tracks in coming days.

Andrew
By Andrew at 8:11 PM 2 comments: Links to this post

There is a rising possibility of potentially significant snowfall over the March 1-4 period.

The first wave of this snow event will come along on March 1st, roughly around this Saturday. Latest model projections take this system as a rather disorganized system, with lobes of vorticity scattered about the general storm. The jet stream around this system has a jet streak just to the southwest, meaning the storm would be expected to strengthen and dig a bit further south in the process. However, seeing as this system never really develops itself, and with a lobe of the polar vortex to the north in Canada, the best bet would be to maintain the storm where it is. Barring any significant model changes in the future, this first wave looks close to being correct.

The second wave is a bit trickier. We have an elongated band of vorticity, which is able to trace its roots back to Baja California. We also see a large system in Montana, which will have quite an influence on the system. The jet stream looks to have this system in its grips, as the band of air is depressed in the Southwest and rises northward as a result. This is also reflected here on the 500mb chart, as you can see the northeast progression of contour lines from the Southwest to the Northeast. On one hand, we could argue that the jet stream may eventually push this storm further north than projected. However, on the other hand, the lobe of the polar vortex to the north could end up pushing the storm back to the south. If there is to be a shift, I would be more inclined to side with a northward shift, but everything remains up in the air until we get these two waves sampled.

The general idea here is that we are likely to see a snow event in the March 1-4 period. How can I be so sure? Take a look at the graphic above. If you look closely you'll see a bump over Japan in the upper left hand corner, and if you were to loop through the 500mb anomaly charts for Japan over the past few days, you'll see that there have actually been two systems moving through Japan. If we use the 6-10 day correlation, explained by Joe Renken, to tell us when these two systems may 're-appear' in the US, we end up with a rough March 2-6 timeframe, and that really boosts confidence in this snowstorm idea. In the past, this 6-10 day correlation has verified with a high success rate, and I expect a similar story to unfold over the next several days.

Just for a little eye candy, here's what this morning's 6z GFS showed for the snow events. Don't buy into this, the GFS gave out some strange solutions in this run that I don't really agree with. The thing to take away here is that two storm systems are likely in the first week of March, and we could see some significant snowfall as a result.

Andrew
By Andrew at 6:11 PM 5 comments: Links to this post