It now appears the end of September and much of October will end up cooler than normal for multiple portions of the nation. 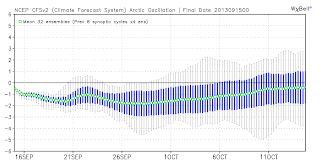 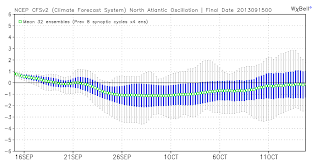 This cool prognosis for September and October is supported further by CFS model projections of a negative North Atlantic Oscillation (bottom image) and negative Arctic Oscillation (top image). These two indexes are closely related, so it is no surprise to see these two going negative at the same time. It is epxected that the NAO and AO remain negative until at least October 10th, when the CFS starts to bring the two indexes to more neutral territory. But even in that situation, the CFS has lowered the projection from neutral to slightly negative in past model runs, which could mean we continue to see a negative AO and NAO past October 10th. Such a development would lead to a colder United States if the rest of the atmospheric pattern cooperates (indications are it would).