A westward shift of El Nino waters began in mid-July, when the Nino was still east-based. However, the warm waters have begun a trend west, and this trend has resulted in warm water anomalies being centered between the 120 W and 180 lines in the Pacific. For the El Nino to be west-based, one would want the warmest anomalies to be west of the 180 line.

This has big implications for this winter. It is known that different strengths of different ENSO phases in different regions of the monitoring area all have different solutions. In this case, we have a moderate El Nino that began in the east-based region. In winter, if you live in the East US, you would want the El Nino to keep pressing west, as a west-based El Nino is better for snow and cold in the East.

A way to remember it is the quote "Go west, young man!". El Nino translates to 'young boy' in Spanish and fits into the classic quote.

Andrew
By Andrew at 10:09 PM No comments: Links to this post

All of these posts will be automatically posted, and I will set up a temporary directory page when it all begins to provide easy access to all forecasts.

Andrew
By Andrew at 7:23 PM 2 comments: Links to this post

The latest 12z GFS model has produced a scary scenario in extremely late August/Early September, where a hurricane with pressure as low as 980mb landfalls on the East Coast. The worry comes as the GFS is unusually skilled in forecasting tropical cyclones.


The GFS is projecting Invest 94, shown above currently stationed offshore Africa, to move west and quickly develop into a deep tropical system. As you can see, right now Invest 94 is not too organized. Despite the lack of major convection, I am seeing some startling signs of circulation, with a very defined banding pattern evident across the invest's cloud extent. This is very worrying to me, and only a few sustained bursts of convection would be needed to get the invest into a serious player.

The current tropical cyclone formation probability suggests a pretty elevated chance of a tropical system to form in the presence of Invest 94, which is roughly near the 30 W and 15 N lines. If we look back to the satellite imagery, one can also see where it may go in the future.  The 10 N line can be used as a reference point to help determine tropical cyclone tracks. For example, systems to the north of 10 N typically have a better chance of recurving north and out to sea, while systems below the 10 N line typically have a better chance to move west and impact the Caribbean. 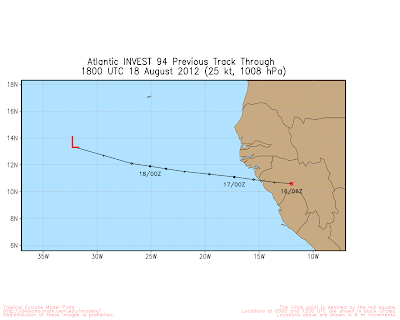 However, the past track of Invest 94 displays the clear west-northwest motion of Invest 94. If the system is to pose a threat to the East Coast, a nearly perfect westward path would need to be established, and development would have to be delayed. As we saw with Ernesto, a lack of strength with the system can have the system keep at a westward path, with motions to the south possibly tainted in there as well.

Because the GFS is so long range with it, I question the validity, as I do with all long range forecasts. However, a strangely well-defined circulation and fair west-northwest movement tells me that the East Coast is indeed in a possible path of this system.

Andrew
By Andrew at 5:35 PM 3 comments: Links to this post 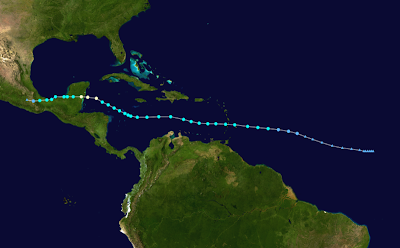 Hurricane Ernesto began as an invest in the Eastern Atlantic. For a few days, Ernesto waded west-northwest before becoming a tropical depression, and then Tropical Storm Ernesto was born shortly after.

Ernesto continued right into the mouth of the Caribbean. Model scenarios began depicting a potential scrape with the Yucatan Peninsula before the system would move into the Gulf of Mexico. Beyond then, forecasters could only fear the worst- rapid strengthening and a landfall on US soil.

As Ernesto continued on a mainly westward path, tainted slightly to the north, the cyclone was not strengthening as quickly as expected. As weaker storms tend to move west rather than south, forecasters began to see models shift south with their solutions, producing a full-on Yucatan Peninsula landfall.

Moving a few days ahead, something happened overnight that was unexpected to forecasters. Ernesto took a wobble south. This little movement was the nail in the coffin for any potential landfall in the Gulf of Mexico. Ernesto then made another northwest movement, but it was too little too late.

Ernesto finally became a Category 1 hurricane right before the first landfall on the Yucatan Peninsula. After the landfall, Ernesto emerged a tropical storm, and headed west-southwest before making a second and final landfall on Mexico. It seemed Ernesto was set and done. But on the other side of Central America... 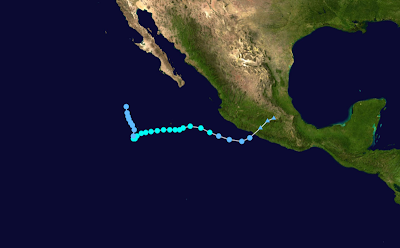 ...Hector was born! The remnants of Ernesto moved southwest over Mexico before emerging into the East Pacific. Immediately, a tropical depression formed. This tropical depression made a little swing south as it moved west before eventually forming into Tropical Storm Hector.

It is not too common to have a cross-ocean tropical system. Because Ernesto technically dissipated over Mexico, it had to be renamed when it reformed in the East Pacific. However, if Ernesto had retained tropical storm strength, it would have emerged as Ernesto once again in the East Pacific.

Tropical Storm Hector continued on a west-southwest path before making a sharp turn north and degenerating into a tropical depression for a couple of days until degeneration and the end of Hector/Ernesto.

So, combined, how long did Ernesto's remnants stay alive? If Ernesto formed on August 1, and Hector dissipated on August 17, then this tropical system stayed in the game for a full 16 days. It's not often you see storms that survive that long, much less cross the ocean and regenerate.

Andrew
By Andrew at 7:53 AM No comments: Links to this post