See the video briefing here:  http://www.youtube.com/watch?v=XA092WIrVUA
Mentioned by Paul Yeager from the Huffington Post. http://www.huffingtonpost.com/paul-yeager/winter-forecast-2011-2012_b_981801.html
Mentioned by 8NewsWeather in Richmond, Virginia
See updated Midwest Snowfall Map Here: ***UPDATED*** 2011-2012 Winter Snowfall Map for Midwest
See the Official 2011-2012 Winter Storm Track Map and Discussion Here:  NEW: ***OFFICIAL 2011-2012 Winter Storm Track***
Hello everyone, this is the first official 2011-2012 Winter Forecast produced by The Weather Centre. We have decided that this will be an official forecast rather than a 3rd preliminary forecast, as we are investing a higher amount of confidence in this forecast than we would in a preliminary forecast.
Let's take a look at the newly-declared La Nina this year.

The La Nina is currently East-Based, meaning the lowest temperatures are sourced from the eastern regions of the ENSO areas. To know where the ENSO area is, just look along that horizontal line in the images above- that is within all the Nino regions. Anyways, looking at the SST (Sea surface temperatures), it is very clear a La Nina is in effect on the far eastern side of the ENSO region, with anomalies below -.5 degrees, which is the threshold for a La Nina. The CPC does expect this La Nina to continue and strengthen onwards as we continue through this year.
You might be wondering what all this talk about East Based La Nina is. Below are the temperature effects from West and East Based La Ninas.

The East-Based Nina favors a cooler nation, while West Based La Ninas typically torch the East Coast westwards through into the Plains. Right now, I am expecting this East Based La Nina either to stay where it is, or more likely, spread slightly westward into the center of the ENSO area.
The CPC does make forecasts as well, and they are something we analyzed closely while looking at this forecast. Below is the December-January-February (DJF) forecast for precipitation, then temperatures.

One thing to base anomalies off of is historical information from past Nina's. Below is the raw data for a typical La Nina in terms of temperature and precipitation.

Something else we can forecast for is the NAO, or North Atlantic Oscillation index.
The NAO is basically associated with a permanent low pressure system over Iceland (Icelandic Low) and permanent high pressure system over the Azores (Azores High). These two vary in daily and monthly etc. strengths, and that variation is called the NAO. Below you can see an example of the variations in pressure.

You can see how the NAO went negative during practically the whole 2010-2011 winter. Recently, the NAO has also been down. When the NAO is negative, it leads to heat waves across the US. You can take a more short-range past look at the NAO below.

All that considered, we can produce a very good forecast for the US. We present to you the 2011-2012 Winter Forecast by The Weather Centre. 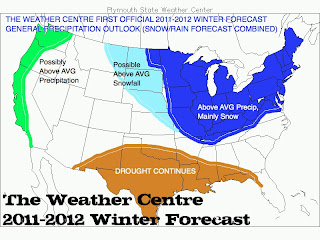 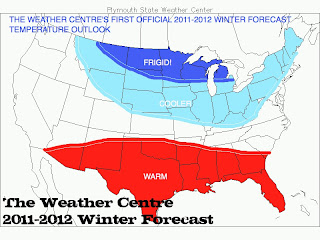 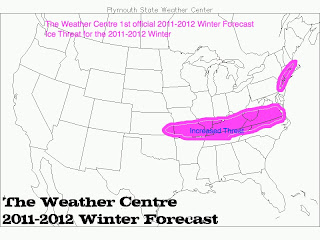 The Ice Threat for this year is in similar areas as to last year, but with a more pronounced threat out west with the potential for a warm winter start across the nation's midsection. 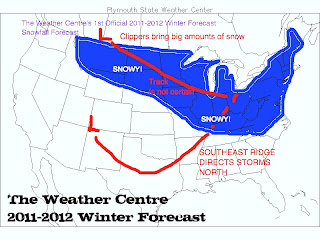 We strongly believe the North US will be very cold, with much of the north half of the US cooler than normal as well. This La Nina will keep the Southern US warm, and, yes, dry. Things will only get worse throughout this winter for the South. The entire Midwest/Northeast/Upper Midwest will get in on above average precipitation. While we cannot pinpoint if all of that will be snow, we are taking the chance that the majority will be snow. The West Coast may have to deal with another wet winter, but we are not entirely sure on that prospect. Portions of the western North Plains will have potential for above average snowfall forecast. This is based on the prospect for clippers this year. We anticipate the North Plains to receive quite a bit of snowfall from these clippers. If the worst case scenario pans out, you will need a new (and bigger) snowblower this winter in the North Plains. Lake Michigan is warm. You know what that means- lake effect snow. Undoubtedly, there will be very heavy amounts of lake effect snow for Michigan, Indiana, and probably Chicago, IL.
There is something we have to discuss- the Southeast Ridge (SE Ridge). The SE Ridge is an area of high pressure that forms over the Southeast. This ridge of high pressure directs low pressure systems northward towards the Ohio Valley and Great Lakes/Midwest region, in turn giving those places snow. An example of this is the 2011 Feb. 1-3 Groundhog Day Blizzard. This unusually strong storm fired from the South US north and demolished Chicago and places nearby. There is a consensus that this SE Ridge will be stronger than last winter. This would mean the storms having a slightly higher likelihood of going north than south. I do see a potential for 12'' snowfalls (notice the plural) across the Midwest/Ohio Valley/Great Lakes, but I hesitantly say no to another Groundhog Day Blizzard. That was a once in over 20 years storm for the Midwest. This SE Ridge's strength may affect the Northeast's traditional 'Nor Easters', but there will still be the heavy snow, ice and rain for them too.
Bottom line- this winter will be wild across the Northern tier of the United States. From Chicago to New York, it will get messy. If you haven't already, buy an extra shovel or two for this winter, ESPECIALLY if you live in a lake effect snow-prone area.
By Andrew at 12:00 PM 26 comments: Links to this post

Valid at 5 am tomorrow morning, the WRF model is predicting that Southern Illinois will get socked with a line of strong, training thunderstorms associated with a low pressure system over the region. It looks like this image is the peak point of the storms, after this they spread out into moderate showers over a larger area. This image indices the threat of flooding, as it appears possible the storms may be training. In Figure 1, check out the 12 hour precipitation.

The 1st Official 2011-2012 Winter Forecast will be released in just over 2 hours.
Make sure you're here when it's released!
By Andrew at 9:08 AM No comments: Links to this post

Fantasy-Land CFS Model Shows US Taking Quite a Cold Hit

This is an image of the CFS model for 1020 hours out (meaning it won't happen, or theres a microscopic chance it will, thus the post name 'Fantasy-Land') for temperatures across the US. These temperatures are calculated in Celsius, so with the -21 Celsius reading on the IA/IL/WI border comes a -5.8 Fahrenheit temperature reading.
Again, take this with the smallest grain of sale- it's just something interesting I wanted to share.
By Andrew at 12:01 AM No comments: Links to this post