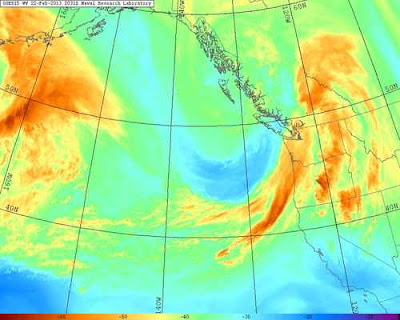 Current satellite water vapor imagery indicates that the storm system in question is currently over the waters just offshore the Pacific Northwest. Enhanced water vapor values across the Pacific Northwest would indicate the presence of precipitation, and radar analysis confirms that precipitation is ongoing in the oceanside states. Despite its appearance of close proximity to the United States, 500 millibar analysis reveals the storm is still too far away for weather balloons (that are launched in the US Mainland) to get into the storm and put data into the models that would help significantly improve their forecasts for this storm.

For this post, we will be using the European model and ensemble forecast out of consistency for this storm. American model remains out of touch with current trends, which will be reflected in this post. Shown above is the Hour 72 (times will be expressed in hours for this post. If you want to know how many days out that is, divide the number of hours by 24) from the European ensembles, forecasting 500 millibar heights. The system is clearly indicated by a deep depression in the Rockies and Plains. Such a strong depression does indicate a strong storm. Looking closer at the storm, we see it is almost pointing straight down with those light blues. This indicates a neutral tilt storm. This means that the storm's 500mb appearance is not pointed towards the southwest (positive tilt) or the southeast (negative tilt), it is simply pointing south. For future reference in this post, a negative tilt means the storm is at its strongest point.

Let's go back to the winter storm we just had across the Plains and Midwest. If you recall, the concern in the days leading up to the forecast was that it would reach a negative tilt too quickly, and would then occlude (or weaken) as it progressed northeast towards the Midwest. This did end up happening, and the Plains got the brunt of the storm. This was thanks in part to how early the storm attained a negative tilt. By the time it was exiting the Rockies, it already had developed a negative tilt. However, looking at the forecast above, we see it is holding on a neutral tilt- a good sign for those east of the Plains as far as snow potential goes. Another thing relating to this recent storm is where it exited the Rockies. I did mention in a recent post how it would be exiting the mountains in southeast Colorado. This is further north than what is being shown above. The European ensemble's forecasted south placement of this storm system relative to the previous storm is more good news for folk in the Midwest and Great Lakes that may be affected by this system.

We now progress ahead to Hour 96 of the European ensembles forecast, again looking at the 500 millibar level. We find that the storm has now exited the Rockies and has attained a negative tilt, shown by how the storm seems to be pushing into the southeast. This pushing motion/negative tilt does a few things. For one, it strengthens the storm. The presence of a negative tilt does mean the storm has reached maturity, as I mentioned earlier in this post. Second, the system begins to dig down towards the southeast. In a similar situation to the most recent snowstorm, there will be high pressure to the east of this storm system, and that feature is exhibited well by large arcs of greens and yellows in the East Coast and Northeast. This high pressure, combined with the strongest areas of vorticity pushing southeast (the technical definition of a negative tilt) results in the cold front catching up to the warm front, and this results in the final stage of occlusion. Occlusion of a storm means that the negative tilt swings north so the storm seems like it's pointing to the east or even northeast. When this happens, significant weakening of the system occurs and precipitation weakens in response. This is exactly what happened in the Midwest and Great Lakes with the most recent storm system. Luckily for those folk, the European ensembles believe that this will happen when the system is beginning to cross into Canada in the central Great Lakes just east of Michigan (the mainland Michigan, not the U.P.). 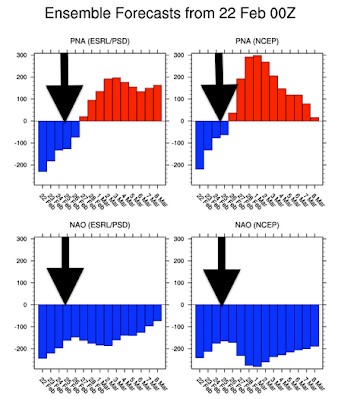 Now it's time to look at what the atmosphere will be supporting as far as storm tracks. Shown above are two different atmospheric indices, forecasted by two different government weather agencies. The ESRL/PSD agency has their forecasts on the left hand side of this multi-panel image, while the NCEP agency is on the right hand side. The two indices being forecasted are the Pacific North American index (PNA) and the North Atlantic Oscillation (NAO). For ease of viewing, I superimposed arrows pointing towards the date of this storm's timeframe. The two agencies generally agree on a slightly negative to neutral PNA. A negative PNA means there are negative height anomalies in the West US (low pressure), thus positive height anomalies must form in the East US (high pressure), as dictated by Newton's Third Law of Motion. The negative PNA discourages the big coastal storms known as Nor'easters, and are typically detrimental to the formation of any big winter storms in the central and East US, save the North Plains. However, as I stated with the European ensembles, there should be very little influence from the PNA at this time, which leaves more influence up to the NAO. Both agencies have the NAO negative during this timeframe. In the negative NAO, high pressure builds over Greenland. In response, the jet stream drops south into either the Central or Northeast US, bringing cold to the region. The negative NAO then enhances the subtropical jet stream, which is basically another jet stream along the Gulf Coast and South US. This is the jet stream that drives the Nor'easters up the coast. As the subtropical jet stream (STJ) is enhanced, high pressure in the East is suppressed, meaning that if there were a solid negative PNA, it would have to fight the negative NAO. Luckily, there will not be a strong negative PNA this time around. 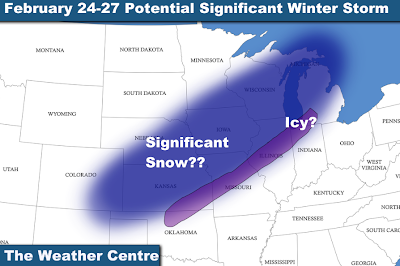 Here's my current thinking on the system. I'm going to buy into the European model and ensemble's consistent solutions and insert a large swath where significant snow may fall. It should be noted that the significant snow area may have to be pulled south a bit if some indications of mine become stronger. I also put in a potential icy area. Temperatures are shaky right now in the icy zone, and those areas could see a potentially major icing event. Don't begin preparing yet- besides the system not being in our upper air network yet, ice storms are a much shorter-range forecast than snow, as ice is much harder to forecast. Nonetheless, keep up to date on the latest forecasts if you are in the icy zone.

Comments are welcome, please don't ask for your location's snow or snow day chance. You will not get an answer, because we are too far away from the event.

Andrew
By Andrew at 4:02 PM 7 comments: Links to this post