**Although not mentioned, all posts today are dedicated to Dawn Hochsprung, the principal of S.H.E.S. killed in the school's shootings.** 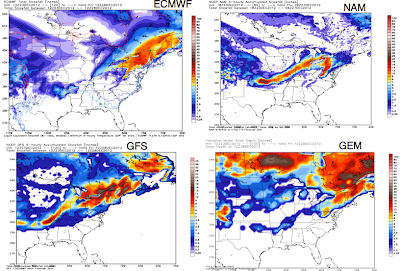 Above are the four major models' snowfall forecasts for the December 25-27 significant winter storm. All 4 models go out to 120 hours, except for the NAM, which can only go out to 84 hours.

The ECMWF and GFS appear to have a good handle on the snowfall. The ECMWF's snow is not showing up as significantly, because the site where this was gotten from (WeatherBell) derives the snow from precipitation forecasts, meaning they use a different algorithm to get snowfall forecasts from that model. Getting the real algorithm requires a LOT of money.

The GEM model is off in its own world, typical of one of the worse models in the forecasting industry. The NAM is heavier with the snow in the Midwest than the GFS or ECMWF models are. This is to be expected, however, considering the NAM has a colder and wetter bias than other models (a.k.a. it overestimates snow).

Personally, I'm thinking the GFS has a good solution going, mainly because the GEM is unreliable, the NAM always overestimates snowfall, and the ECMWF snowfall forecast isn't showing up correctly for some reason.

To see the full update from earlier today, click on this link. 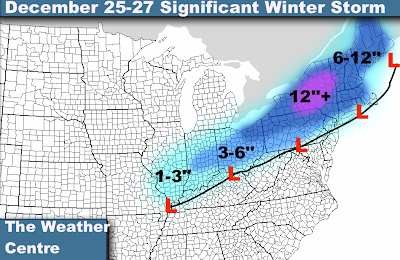 The December 25-27 timeframe only continues to look better and better in terms of snowfall for the Ohio Valley and Northeast.

Above is my latest thinking about this storm system. I believe that the system will drop a good 1-3 inches in southern Illinois and much of Indiana before 3-6'' accumulations take over in central Indiana. The storm begins to strengthen at this point, and all of Ohio s under the gun for shovelable snow. Northeast Ohio looks to get in on the worst snow of the state, with 6-12 inches possible. It is not out of the question that isolated areas in northern Pennsylvania could see amounts flirting with 12 inches, but much of the state should get 3-6 inches. New York will receive the worst of the storm, with the central part of the state up for a good 12''+ accumulation. Most likely the maximum amounts will get just below 15 inches, but certainly a good storm, depending how strong the storm gets when it receives the Atlantic influence. Maine is a little tricky, with much of the state likely to near 12 inches and scattered locations surpassing the one foot mark. 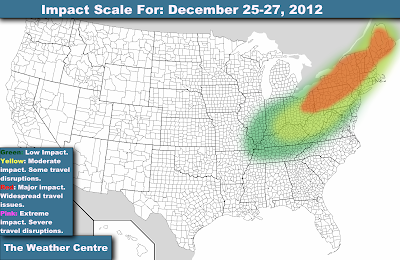 Considering this is a very busy weekend, the Impact Scale will come in handy. I am projecting Low Impact conditions through the Midwest locations, save Indiana. Indiana, Ohio and Kentucky are in the middle of a 'Moderate Impact' forecast, where some travel will be disrupted (i.e. some plane cancellations, several delays). The Northeast is covered in a 'Major Impact' forecast, as the heaviest snow will fall there. Widespread travel disruptions are likely, and I anticipate a chaotic mess for the days after Christmas as dozens of flights are cancelled, and hundreds of delays are observed.

A word of advice: I heard stories about some people driving to their location rather than flying during the December 19-22 blizzard. The car is much more dangerous than the airplane, as far as potential for having an accident in a winter storm goes. The car is in direct contact with the potentially-icy ground, while the airplane (despite its delays and cancellations) is much faster and safer. But that's me, and I'm not one to decide how you get back home for New Year's. 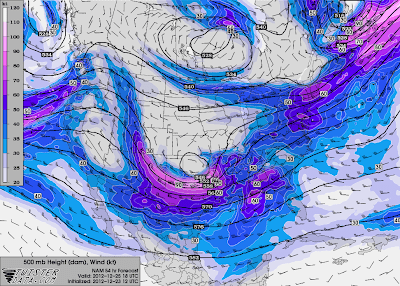 The 500mb wind forecast from the NAM model on Christmas Day shows a strong storm system in Oklahoma, with winds surpassing 90 knots. Notice how the winds are also tilting to the southeast. This tilt means the storm system is negatively tilted. In a negatively tilted system, cold air is able to flow more freely aloft, meaning higher instability and higher chances for severe weather. 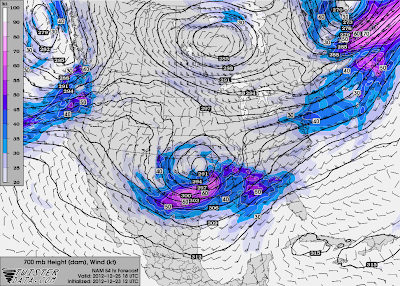 The 700mb winds show a very strong value of over 60 knots present over Texas and Louisiana. The presence of very high winds in the lower level jet stream only significantly increases the threat of severe weather and tornadic thunderstorms. Considering the high gradient of dewpoints, it does appear that these storms will form along a dry line (high gradient of moisture). Drylines are commonly the focus of severe storms in the spring, so we could very well be dealing with spring-type severe weather.

Such a situation needs to be closely monitored, as, if these forecasts verify, lives and property could be threatened.

Potential is on the rise for a winter storm around December 30th into New Year's. Above is the ECMWF model's 500mb height anomaly forecast for the evening of December 28th. In areas of blues and greens, lower pressure is observed, hence the term of a low pressure system. Warm colors depict the presence of a high pressure system. The storm system we are watching is in Oklahoma/Texas at the moment.

Note the presence of a Rex Block in the West. A Rex Block involves high pressure in the Pacific Northwest and low pressure in the Southwest or just offshore of the region. When the Rex Block is in place, the southern jet stream amplifies, and high pressure will attempt to form in the East US in response to the increasing number of storm systems passing through the South Plains. In this forecast, the high pressure system is based in southern Canada, not the waters off of the Southeast, so a move into the Ohio Valley is not as likely as you may think.


On the evening of December 29th, we see the storm system has actually moved slightly to the northeast and has separated into two low pressure systems. One is based in Michigan, the other based in Missouri. If we count in the Fujiwhara Effect, these two systems should continue a motion to either the east northeast or plain northeast.

For those unfamiliar with the term, the Fujiwhara effect involves two cyclones that begin to orbit each other. This is not unlike the phenomenon of a binary solar system, but the two suns orbit each other rather than planets orbit the suns. If the Fujiwhara Effect does happen to evolve into this situation, I could see the Missouri system moving east northeast, and the Michigan system slightly retrograding or moving east to wait for the Missouri system to catch up.

The ECMWF Ensembles show a similar situation, but more to the north:

The ECMWF model shows snowfall as being confined to the Midwest (IL, WI, east IA, north MO) on the order of 3-6 inches. Do not use the heavy amounts in the Northeast or Ohio Valley here, that snow is for the Dec. 25-27 storm.


Those of you who have followed me for a while know how I use a pattern called the Lezak Recurring Cycle (LRC). This involves a pattern setting up every year that has repetitions, called cycles. Each cycle happens every 40-60 days.  The below image shows the observed 500mb height anomalies on November 7th, about 53 days from January 1st. This year's cycle length is 53 days, meaning that this system does fit into the pattern.