**First and foremost, this post is dedicated to the victims of the September 11, 2001 attacks at the World Trade Centers, The Pentagon, as well as Shanksville, Pennsylvania. Also in this dedication are the first responders and Good Samaritans who both did or did not survive this tragedy.**
New data has come to my attention that suggests that the atmosphere may be trying to sabotage El Nino at this time.

As I reported in an earlier post, the El Nino is on differing pages as for the sea surface temperatures and the atmosphere. The SST's are showing an El Nino is present, while the atmosphere is not positively responding to such a revelation. Let's take a look at what I have found.

The animation above shows temperature anomalies in the Equatorial Pacific waters, specifically over the ENSO monitoring area. At the beginning of the animation, we can clearly see an El Nino progress upwards from deeper waters, specifically from the 200 meter mark. The main body of warmer waters is centered further to the east, making this a central-east based El Nino.
However, take a look at the last few frames. We can see the warm waters over the central ENSO monitoring regions actually dissipating, and cold water anomalies forming right below this. These cool waters are actually slightly strengthening, posing a big question as to how formidable this El Nino really is. Could the waters be turning on the El Nino in addition to the atmosphere? Will the El Nino even be around for winter? Let's take a look at what the atmosphere says on that subject.

Let's start with 850 millibar wind anomalies. Above is what an El Nino would bring in terms of 850mb wind anomalies to the world. We want to focus in on the equatorial Pacific, where we see above normal wind anomalies in the fall months. That said, if we were to be looking for a sign that the atmosphere is on board with an El Nino, we would want to see stronger than normal winds at the 850mb level. Let's take a look at what 850mb winds are looking like right now.

Latest observed wind anomalies in the region suggest there is nothing significant suggesting that an El Nino is present. The chart above shows pockets here and there of stronger winds, but by the slightest of margins- and they aren't even in the right places! The fact that there are no lower level winds that would be in line with that of an El Nino greatly concerns me, and concerns my confidence in the potential for an El Nino to take hold in the next several weeks.

Moving on, we can also use something called the OLR, or Outgoing Longwave Radiation, to measure the ENSO phase. In a nutshell, when the OLR is positive, a La Nina is likely to be present. However, in the negative OLR, an El Nino should be found. Let's take a look at the latest observed OLR values for the last few months, as well as the values for the last several days. 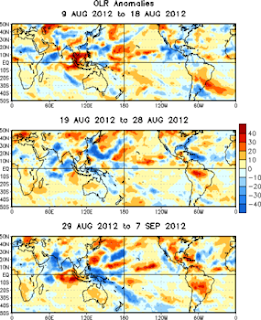 Monthly oLR values over the past several months suggest a low confidence level of the atmosphere, with fluctuations from positive to negative being observed from late spring to the current time.  July did have a low OLR which would signal the presence of an El Nino, but August dashed those hopes, with a +0.2 OLR being observed.
Looking at the last few weeks, fears of an un-Nino like environment are confirmed. Throughout the past several weeks, a notable absence of negative OLR values was observed. Positive anomalies were even found where the El Nino should be, conclusive to a lack of atmospheric support to an El Nino.

In conclusion, this new suite of data I have discovered has led me to believe that the atmosphere is not on the same terms as the sea surface temperatures. Additionally, underwater cooling of the same warm water anomalies is only building concern for how far the El Nino can go, especially into this winter.

Climate models are beginning to back off as far as the intensity of the El Nino goes. In my opinion, this is a very wise choice- some further weakening may even be needed going into late fall and winter, as the El Nino is expected to die down further going into that time frame.

As for winter-- The analog year of 2006-2007 that I posted on the earlier referenced post is looking better and better to me, as long range forecasts encourage a stormy pattern over the central and east US, with ridging in the Northwest. Some of you may know a pattern called the LRC, or Lezak Recurring Cycle, and this may be a part of that cycle that is setting up this winter. 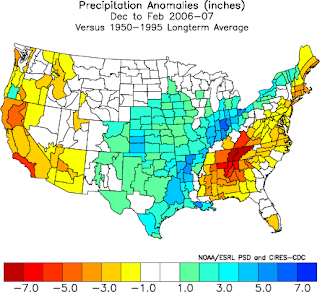 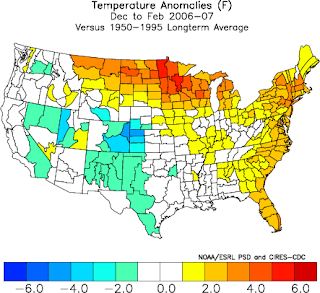 The winter of 2006-2007 was a wet one for the Ohio Valley and Midwest into the Plains. The probability of this exact scenario is unlikely, and there are always additional margins for error with using only one analog year. However, with each day of the atmosphere and SST's differing on the Nino, the prospect for a 'fake' El Nino grows further.
Andrew
By Andrew at 4:30 PM 28 comments: Links to this post

New and very interesting developments concerning the El Nino have come to my attention. A post with the details on the new information will be out at 4:30 PM CT this afternoon.

Andrew
By Andrew at 12:11 PM No comments: Links to this post