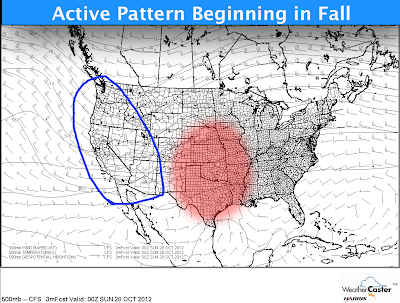 An active pattern looks to be in store this fall if the CFS is to verify.

The 500mb forecast for October shows a depression of height lines on the West Coast which has been outlined in blue. This depression is characteristic of a storm track pushing through the West Coast and through the Southwest. This track is traditional for what can become severe weather outbreaks in the Southern Plains. The area outlined in red is for where this pattern could produce an active weather pattern going into fall.
This pattern could be temporary, as the CFS does not predict this depression on the West Coast going into the rest of fall and early winter months. However, I find this to be an interesting development, as this would essentially break down the ridge that has been spreading record-breaking heat across much of the nation.

Andrew
By Andrew at 9:27 PM No comments: Links to this post

There is a severe weather threat over the Upper Midwest and Midwest into the western Great Lakes in early August, particularly on Saturday, August 4.

Andrew
By Andrew at 8:54 PM 3 comments: Links to this post

Invest 99 has formed off of Africa with little evidence of circulation but an abundance of showers and storms.

Satellite imagery indicates that Invest 99 is composed of several clusters of showers and thunderstorms, with what could be a weak center of circulation in the middle of the image shown above. However, no significant circulation is evident, nor any enhanced convection around the weak circulation. Thus, the invest appears weak at this time.

However, the GFS Ensembles (GEFS) are forecasting this invest to trend westward and into the Caribbean, shown as the circles in the above image. This image shows 1008 and 1048 isobar markings, meaning that this invest could stay in fairly weak territory. Despite this, I find that the Caribbean may be supportive enough for development should the MJO race around to Phases 8-2 in the next 5 or 7 days in order to make a 'perfect storm' of development potential. Whether that happens remains to be seen.

Andrew
By Andrew at 10:13 AM No comments: Links to this post