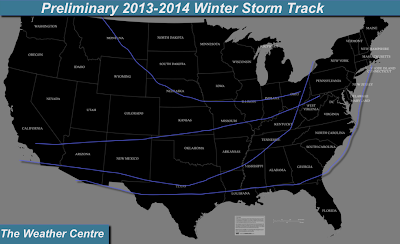 This is my preliminary 2013-2014 winter forecast. Bear in mind this is all VERY preliminary, and certainly not set in stone. There are four storm tracks we will analyze here- from the top of the image to the bottom, we will analyze the Alberta Clipper, the Colorado Low, the Panhandle Hook, and the Nor'easter.

Alberta Clipper
The Alberta clipper involves a relatively low-amount snow system that originates in the Canadian province of Alberta and swings down into the US, leaving howling winds and biting cold in its wake. The clipper system is moisture-starved, leading to its usual 2-5'' snowfalls it puts down. This winter, I anticipate the Alberta Clipper to be a little less prevalent than usual, but due to a still-unknown pattern just offshore of Canada, confidence in that outlook is low.

Colorado Low
The Colorado Low is a storm system that originates from the West US and passes in or close to Colorado, depending on its eventual track downstream. The Colorado Low then moves northeast, and can bring rather significant snows to the Plains, Midwest, Great Lakes and even the Ohio Valley. This winter, I expect we will see more Colorado Lows than usual, as ridging in the West and a stormy pattern offshore the Southwest should lead to a more active storm track.

Nor'easter
The Nor'easter is quite possibly the most intense winter storm that can hit the United States. Its cousin, the Panhandle Hook, will be rather active this winter, and it's no surprise that the Nor'easter should be either normal or slightly above normal for this winter as well. It will depend on the presence (or lack) of ridging in the Southeast, which, if it were to be present, would discourage Nor'easters. I'm not sure which way I'll lean as far as if these storms will be normal or above normal. That should become clearer by October.

Andrew
By Andrew at 3:49 PM 4 comments: Links to this post