What Are The Chances The Polar Vortex Drops Into The US?

The chances are on the rise for the potential of some serious Arctic cold hitting the nation going into the latter part of the month. But could the polar vortex actually enter the United States? Let's take a look. 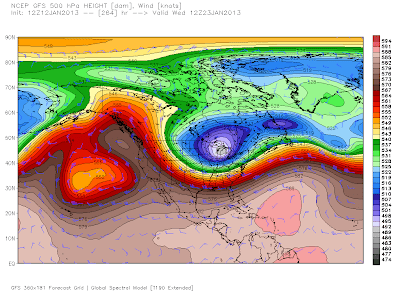 This is the GFS model's 500 millibar forecast for Hour 264, about 11 days away. We see a deep depression of heights in the Great Lakes, shown as blues and purples and even whites. These colors symbolize extremely low heights, showing that the polar vortex is in that area. There are a few crucial things we need to get straight before we dive into this forecast.

First and foremost, it is now probable that the polar vortex will drop south from the Arctic. The thing the models are having trouble with is just how far south. Initially, when this vortex drops south, you will see a depression of heights in Canada, not unlike the one seen in the image above. In response, high pressure should form in western Canada and may propagate south into the West US as a positive Pacific-North American (PNA) index. The positive PNA opens the doors for cold air to flow south into much of the central Plains, Midwest and into the East US. I find it only logical that the PNA, which has been strongly negative recently, will have to push to neutral or slightly positive levels as this polar vortex pushes down. It's plain physics- if there is a force pushing down, there must be another force pushing up; in this case, the polar vortex will be pushing down and the PNA must then go positive with high pressure building up in the West US and west Canada.

This positive PNA will then open the door for chilly air to make its way as far south as the North Plains. Depending on where the polar vortex as a whole shifts through the following 2-4 days, the track of the vortex could be dramatically changed. Right now, it would seem likely that the vortex would want to keep pressing south due to the positive PNA starting to enforce its will upon the storm track, which then dips south in response. Something else supporting the Plains and Midwest starting off with the coldest temperatures is a very weak east-based negative NAO. If you look on the above image, you will see Greenland in the top-right corner with a sash of blue across it. That is low pressure and is the anti-cold positive NAO. However, there is a small green bubble of slightly higher heights that would signify the presence of a weak east-based negative NAO. The negative NAO has a west-based and east-based phase. The former option supports the cold hitting the East Coast, and the latter has the Plains/Midwest receiving the brunt of any cold and stormy activity. The GFS supports the idea of an east-based weak negative NAO, adding influence to the positive PNA that then supports a general cold regime taking place in the Plains/Midwest (possibly in the form of the polar vortex). It would eventually  move east (the cold would), but with more of a moderated stance, not as strong as the Plains/Midwest. 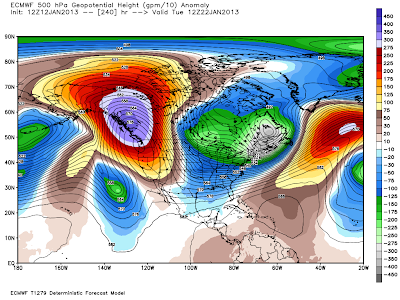 This is Hour 240 of the new ECMWF model run, showing 500 millibar height anomalies. High pressure appears in warm colors, low pressure in cool colors. Here, we see the polar vortex has pushed east into the Canadian Maritimes, but another piece is reloading in south central Canada and would likely push south and east with time if this model went out further in time. This would also ensure a cold shock to the system, especially for those in the Plains, Great Lakes and Midwest. We still have that strong positive PNA paving the way for enhanced cold in the aforementioned regions, and what could be a weak east-based negative NAO trying to push north into southeast Greenland. Both models have a really nice cross-polar flow going on with high pressure pushing the jet stream north across the Arctic (hence cross-polar flow) and down into south Canada or even north US.

I made a check-list of things that need to happen in order for the polar vortex to begin pushing into the US. Confidence in these events occurring is added as well:

As you can see, there is still a lot to do before there is a good shot at the polar vortex sliding south into the States. However, we're already on our way to our best chance for winter yet- even if the vortex does not come crashing into the US, cold shots will make much of the north central and far northeast US colder.

Please don't ask what your location will be like, there's no answer to give at this point.

The polar vortex has begun the intense and dramatic process of its collapse, as shown in the above multi-panel image from the Japan Meteorological Agency (JMA). In the image, we see a 6-day chart of observed heights at the 30 millibar level in the stratosphere, typically known as the mid-upper stratosphere. You can clearly see the separation of the polar vortex into two daughter vortices, with one over Eurasia and another over Canada. The dominant vortice in this case is the Eurasian one, due to its massive size, but the Canadian vortice appears to be a small, compact daughter vortex, not unlike Hurricane Andrew in 1992. I'm certainly not saying that these vortices are producing effects like that of Andrew, the stratosphere is not capable of such a feat. However, the split tells us forecasters 'The Arctic is having a breakdown.'

This split was caused by the much-anticipated Second Warming that I have been posting about for days on end. This second warming is the second 'C' in my new 'Three C's' List, which consists of the following:

The Corrosion refers to the weakening of the polar vortex to a point of a state that it has not collapsed, but has sustained damage to the point that a split is possible. The Crack refers to the split in the polar vortex, when a stratospheric warming forces the vortex to crack into several vortices. And finally, the Collapse indicates the polar vortex can no longer control the Arctic, and its vortices are forced south into lower latitudes. I believe we are well on our way to the last stage of Collapse, shown by the chart below:

This is an image of potential vorticity values for the Day 10 forecast from the ECMWF model. Higher potential vorticity values indicate the presence of low pressure, in this case the polar vortex. The number 850 K on the above image refers to the isentropic level of 850 K. Before you start wondering what all this means, let's sort it out. The isentropic level 850 K is equivalent to 15 millibars, meaning this is a forecast for the strength of the polar vortex in the relative upper stratosphere at 15 millibars. Not to hard to understand now, is it? Anyhow, do you see any oranges or even whites? No? That means THERE IS NO POLAR VORTEX. It's GONE. It has actually gone beyond Collapse into a whole new level of disintegration.

We just want this disintegration to propagate down to the lower stratosphere, like the level 475 K shown below (roughly 105 millibars, the very bottom of the stratosphere):

Things are still looking very good for the end of January into February. Maybe a little toned down on the cold for late January, but Siberia supports a very chilly February.

The latest GFS model forecast has the polar vortex itself - the motherlode of the Arctic - dropping well into the Great Lakes in about 10-14 days.

The image above shows 500 millibar heights for January 23rd. That big purple spot in the Great Lakes shows extremely low heights across the Great Lakes. There is only one system that can create such a big synoptic area of such low 500mb heights, and that is the polar vortex. This is essentially 1985, but less amplified. Daytime HIGHS would reach in the negative double digits for cities like the Quad Cities IA, Chicago IL, just to name a few.

Now, before you get excited, know that this is the first run the GFS has shown this, essentially Patient Zero. If we want to see this scenario actually have a chance of verifying, we need to see this same forecast output be shown again for the next week to even have a CHANCE in my book. While this is all good fun and excitement, you have to balance out just what the chances of this happening are. The polar vortex will drop south, the big question is how far south. Obviously the GFS thinks its best to fly south and bring winter with it.

UPDATE at 10:00 AM CT: The overnight 0z ECMWF model agreed with the ECMWF in dropping the polar vortex south into the Great Lakes in a very surprising consensus between the two global models:


Andrew
By Andrew at 9:58 AM No comments: Links to this post