Over the life of this tropical system, it will rain on Louisiana every day until landfall as it whirls around in the gulf, taking its grand old time. When it does get down to business though, it will make a landfall anywhere from Texas to Florida. This is an incredibly tough system to nail down for the models and for the forecasters. We will monitor the situation.
By Andrew at 6:55 PM No comments: Links to this post

Email ThisBlogThis!Share to TwitterShare to FacebookShare to Pinterest
Related: TD 13

The models have shifted far west over the day as Katia weakens below tropical storm strength. Katia is once again a tropical storm after briefly reaching minimal Category 1 hurricane strength. The models have al devised a similar plan. They are now projecting Katia to come menacingly close to the East Coast. Below we have the majority of computer models as of 1:00 PM CDT excluding the ECMWF.

We believe we know maybe some of the reason of why Katia may not curve northward as quickly as previously thought. One person had stated that if Katia remains 'weak' after passing the 50W degree point in the Atlantic Ocean (see the map above), then the chances of an East Coast hit would rise. Here's a basic explanation of the more in depth stuff. There is a permanent high stationed over the Azores area. So that high pressure system is there nonstop. However, when troughs, or low pressure areas come through, they can disrupt a portion of that continuous high pressure, mainly on the west sides of the high pressure. When that happens, a gap is created that a tropical system can move into. That happens more often when the system is stronger. Seeing as how Katia is generally weak, we believe this may be occurring and that Katia may be moving more west than thought.
So let's turn to the storm's history.

The storm has been taking on a more west northwest turn over the past several days when it was expected to go more NW. That said, the chances do increase that there is an East Coast threat. If this trend continues in a WNW direction, I do believe the East Coast should begin checking their evacuation plans again. But let's not get ahead of ourselves.

Here's the NHC's forecast. The NHC is expecting Katia to go NW sooner rather than later, in the manner that, by the time I wake up tomorrow, we should see if the NHC was wrong. You really can't blame them in this case- Katia is quite a tricky one to forecast at this time. That's why we are reviewing all aspects. The NHC takes Katia back into hurricane stage and eventually into a major hurricane status, something that would indeed compel Katia to go northwest. 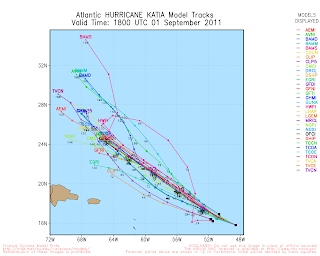 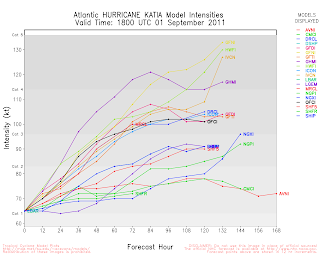 Here we have the ensemble members for track and intensity. Check out how the models in the track are having a fairly tough time, with some of them going haywire. It reminds me of a jumbled stack of wires, and you're trying to find the one that works. There does appear to be a NW consensus over the next few days. But again, if that does not happen, there will be some big changes in store. Intensity forecasts are interesting. This is a more crucial part of the forecasting. Look at the red line at the bottom of the intensity forecast 144 hours out. That is the GFS line. Basically, if it stays in Category 1 strength, it will likely meander along the East Coast like Irene did, but maybe not hit New York. We aren't sure at this time.
Here's the thing you've been waiting for: the ECMWF model. 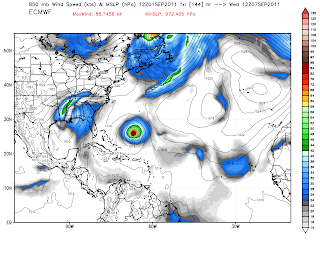 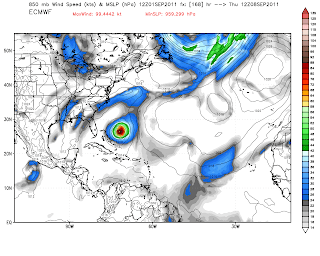 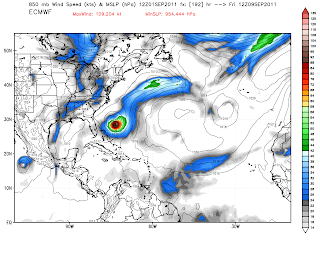 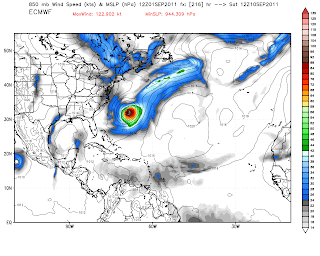 The ECMWF does take Katia to a fairly strong strength and low pressure. The only reason I say fairly is because resolution is low and we aren't able to zoom in enough to get an accurate reading for our standards. Anyway, the ECMWF does threaten the East Coast, but other than increasing dangerous rip currents and heightening waves, there aren't any huge side effects as Katia should then go out to sea. But as we've learned over the years, do not trust one single model. Trust the consensus.  Of course, even consensus' change time after time in each model run suite. But a band of models is still better than a single model.

Because this is so long range, we are opting not to rely on any models or consensus' right now, but we are  thinking that the GFS may be a contender to be the storm track winner later on.
By Andrew at 4:35 PM No comments: Links to this post

A correlation has been found between an active hurricane season and an active winter, due to what appears to be a more negative NAO. This is still very preliminary, but we will keep you updated.
(Read more about the NAO in our 2011-2012 winter outlook)
By Andrew at 2:03 PM No comments: Links to this post

Katia a hurricane, looking out to sea with latest model runs 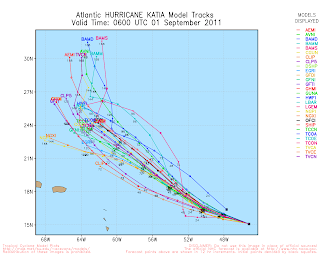 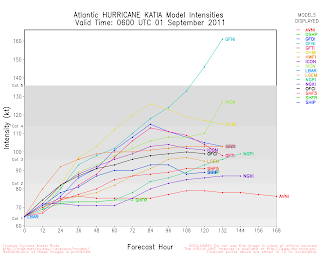 It does appear that the East Coast will likely be safe from Katia, but not for sure. Ensembles show Katia strengthening to a major hurricane as it moves NW. One model has Katia in Category 5 strength. Here's the NHC's track.

And here is historical tracks for storms located within 2 degrees of Katia at this moment.

By Andrew at 7:09 AM No comments: Links to this post